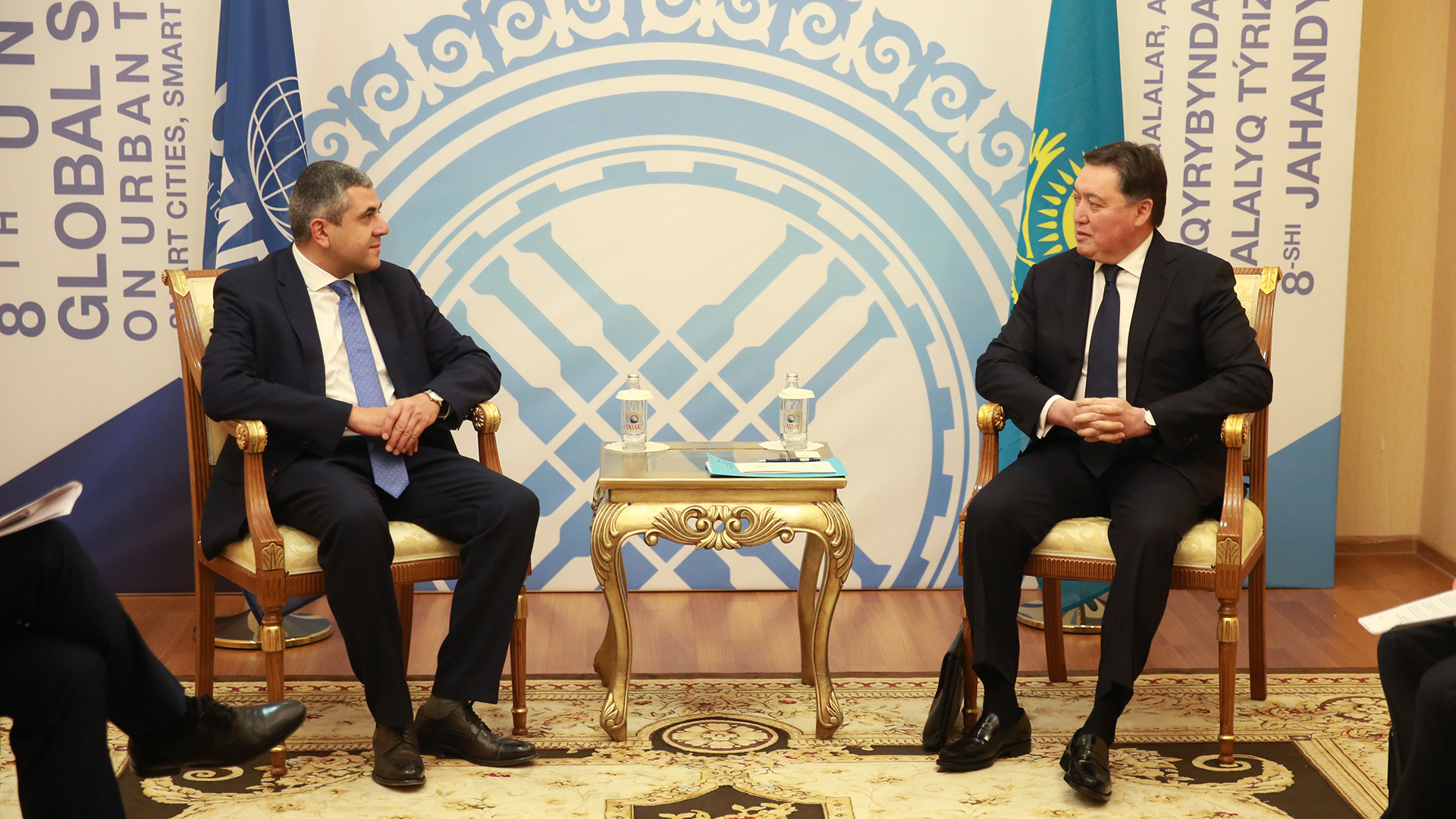 The Head of Government met with the Secretary General of the United Nations World Tourism Organization Zurab Pololikashvili, with whom he discussed issues of urban governance, tourism development and smart cities, the use of advanced technologies to enhance the competitiveness of Kazakhstani cities.

During the opening ceremony of the forum, Askar Mamin noted that today tourism accounts for about 10% of global GDP, 7% of investments, 10% of jobs and 5% of all tax revenues. “The tourism sector of Kazakhstan over the past 10 years has grown on average by 7%, which is about 3% higher than the growth rate in the rest of the economy. Tourism is becoming one of the important factors in our diversification - the share of GDP produced in the sector almost doubled — up to 6% in 2018,” said the prime minister.

Mamin said that Kazakhstan adopted the State Tourism Program for 2019-2025, which provides for increasing the share of tourism in GDP to 8% and turning it into one of the five leading sectors of the economy. About $ 4 billion will be allocated for the implementation of the program, more than 70% of which will be private investment. It is expected that the growth in the number of people employed in the tourism sector of Kazakhstan will increase by 50% to 650 thousand people, the influx of foreign tourists will triple and exceed 9 million, which will put Kazakhstan among the 50 most competitive tourist destinations in the world.

The main center for the development of urban tourism is called upon to become Nur-Sultan, which during the implementation of the plan of the First President of Kazakhstan Nursultan Nazarbayev over the past 20 years has become one of the largest regional economic, financial, transport and cultural centers. The contribution of the city to the country's GDP exceeds 10%, investment in fixed assets of the capital increased by 26 times and exceeded 9 trillion tenge.

“Nur Sultan is a leading force in the adoption of digital and intelligent technologies. The concept of Smart Astana, based on the successful experience of the most advanced European cities, provides for the introduction of advanced technologies and artificial intelligence in the fields of education, healthcare, transport, public services, infrastructure — the areas with the greatest impact on the quality of life of the local population and the perception of the city by visitors. As a result of these achievements, the city is gaining increasing recognition as a leading center for business and MICE tourism (meetings, conferences, exhibitions, etc.) in the region,” said Mamin.

The Global Urban Tourism Summit is held once a year in a city selected in accordance with the requirements of the UN World Tourism Organization.

This event will be held on the topic “Smart Cities, Smart Directions,” it will bring together about 700 people from 30 countries, tourism industry experts, the Minister of Public Works and Housing of Indonesia, the mayors of Ankara, Tallinn, Islamabad, Kazan, Tashkent, Samarkand, Tokmoka, vice-mayors of 25 cities — Malaga, Helsinki, Bangkok, etc.

The capital of Kazakhstan joined the UNWTO affiliate program in May 2018. Previously, the forum was held in large cities with a tourism development level that exceeds global indicators: Istanbul, Moscow, Barcelona, ​​Marrakesh, Luxor, Kuala Lumpur, Seoul.