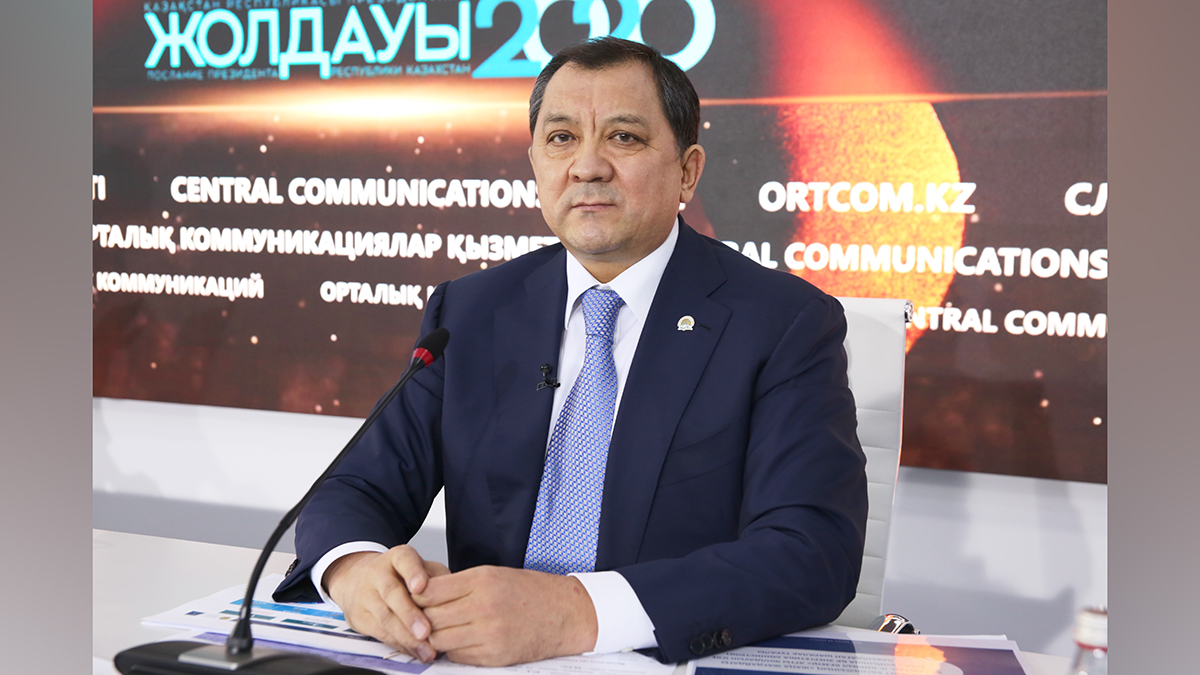 At a press conference, Minister of Energy Nurlan Nogayev spoke about the implementation of the instructions given by the Head of State in his Address to the people of Kazakhstan.

At the beginning of his speech, Nurlan Nogayev spoke about the impact of the pandemic on the energy industry. Thus, 10,795 people employed in the industry were infected with COVID-19. 9,529 of them have fully recovered. The rest are currently receiving treatment.

“It is thanks to the selfless work of our colleagues that the energy system of Kazakhstan has withstood the blow of the pandemic. Despite the virus, people continued to work at power plants, oil refineries, fields, providing the country with the necessary energy,” the minister said.

On behalf of the Prime Minister of the Republic of Kazakhstan Askar Mamin, an operational headquarters was created under the Ministry of Energy to monitor the situation with COVID-19, and all companies in the industry were daily informed to make decisions.

“Meanwhile, we, for our part, made proposals necessary for the stable functioning of the fuel and energy complex and the preservation of jobs. The measures taken have yielded positive results,” Nogayev said.

The following measures were taken to support the industry:

Key indicators of Ministry of Energy for 10 months of 2020

According to Nogayev, in 2020 it was planned to produce more than 90 million tons of oil. However, due to the pandemic, this figure was reduced to 85. This was caused by a decrease in economic activity in the world and a decrease in demand for oil and petroleum products. Accordingly, the refining index has also decreased from 17 to 16 million. At the same time, measures have been taken to prevent overfilling of oil refineries or reservoirs in fields and their downtime.

“In accordance with the instructions of the Head of State Kassym-Jomart Tokayev, the measures taken during the pandemic and the Employment Roadmap were implemented. Many social facilities were overhauled, current repairs and improvements were carried out. The construction of roads was especially intensive. As a result, the plan was exceeded, 1.1 million tons of bitumen were produced. That is, we were able to fulfill the task set before us,” Nogayev said.

A number of measures have been taken within the framework of the execution of the order of the Head of State on the development of petrochemicals, the production of highly processed products, products with high added value. For example, the National Industrial Petrochemical Technopark has been created in the Atyrau region. Within the framework of the special economic zone, the production of 500 thousand tons of polypropylene is carried out per year. For the production of products, this enterprise will provide permanent employment for more than 3 thousand people.

Also in other regions of the country, various industries have begun their work. In particular, a plant with a capacity of 70 thousand tons of polypropylene per year has been launched in Pavlodar region. The production of 100 thousand tons of ointments per year has been established in the Almaty region. Similar products will be produced in Shymkent, and aromatic petroleum products will be produced at the Atyrau refinery.

Currently, a pool of projects worth $15 billion has been created. Of these, 90% are concentrated in the west of the country. During the implementation of these projects, more than 10 thousand specialists will be employed during construction alone.

“The President said that in the medium term, economic growth should move in the conditions of green energy. Guided by these principles, the ministry is working intensively. There are 110 renewable energy facilities with a capacity of over 1.5 thousand MW in the republic. By the end of the year, it is planned to commission 4 facilities with a capacity of 165 MW. If we talk in detail about the energy produced, we get 404 MW from the wind, 891 from solar energy, 224 from hydro and 7.82 MW from bioenergy,” the minister said.

Currently, plans for the development of hydropower have been approved by the Government. In the next 4 years, projects will be implemented for 13 hydroelectric power plants, 34 wind and 12 solar. Thus, by 2025, the Ministry plans to increase the capacity of renewable energy sources to 3 thousand MW.

At present, the Ministry of Energy, together with the Ministry of Digital Development Information and Aerospace Industry and JSC NIT, is creating an information system for accounting for crude oil and gas condensate.

According to the minister, the introduction of this system will automate the accounting of oil production, processing and transportation.

“This year, the information system for accounting for oil and gas condensate has been launched in a pilot mode. In order to gradually connect information systems of subjects of oil turnover, a general scheme for equipping with metering devices has been approved,” the minister said.

The effects of the implementation of the system will be:

In 2021, volume of petroleum gas traded on electronic trading platforms will be brought to 100%.

This year, electronic auctions began to be held to grant subsoil use rights for hydrocarbon raw materials.

“Acceptance of applications for the electronic auction was announced on Sep. 1, the results will be summed up on Dec. 23. 10 deposits are exhibited. This, in turn, will ensure transparency and investment flow to the industry. The number of documents required to participate in an electronic auction has been reduced by 3 times. Bonuses from investors and budget receipts will increase,” the minister said.

In his Address, the Head of State instructed the Ministry of Energy to gradually increase the volume of petroleum gas traded on electronic trading platforms. Next year, it is planned to put up all of the produced liquefied petroleum gas for an electronic auction.

“Currently, the country produces 3.2 million tons of liquefied petroleum gas. Of these, 1.5 million tons are targeted at the domestic market. Of these, 80% — for refueling cars on gas, 20% — for household needs and projects in the oil and gas chemical industry. A quarter of the products will be put up for auction, the rest will be distributed to the regions according to the submitted applications from the akimats,” the minister said.

Fund for development of local content to be created in Kazakhstan

In his Address dated Sep. 1, 2020, the Head of State instructed the Government to prepare specific proposals to increase Kazakhstani content by the end of the year.

Nurlan Nogayev said that the Ministry is currently implementing two initiatives that can increase the share of local content in the oil and gas sector, which are planned to be implemented in the near future.

First, it is the creation of a Direct Investment Fund for Local Content Development.

Chevron, as part of its reinvestment obligations to the Republic, plans to allocate funds of $248.5 million for the development of local content.

Investments will be made in three areas: technology and IT, production of basic goods and assembly of certain types of equipment for the oil and gas sector, as well as environmental protection.

It is expected that within 10 years, the positive effect of the Fund's activities on the GDP of the Republic of Kazakhstan will be about $642 million (or about 270 billion tenge).

It is assumed that a certain part of the goods and services imported at the moment will be produced domestically, which will lead to a decrease in imports by $86 million or 36 billion tenge.

Second, it is the creation of an international center for the development of oil and gas engineering and service.

According to the minister, the purpose of this Center is to localize the production of goods / services for the oil and gas industry of the Republic of Kazakhstan, in particular for the needs of three Operators (NCOC, KPO, TCO) by opening new production facilities and service centers, as well as expanding the capabilities of existing domestic producers and service companies.

This center will help fill the existing gaps for local producers / service companies in the production and supply of goods / services for the needs of operators.

At the same time, from Jan. 1, according to the agreement, within the framework of the EAEU, a common market, including oil and oil products, enters. Up to this point, the relationship between the members of the EAEU was based on bilateral agreements.

“Today we have such agreements with the Russian Federation, the issue of signing with other EAEU members is being worked out. Regarding the Republic of Belarus, we have reached an agreement with our Belarusian colleagues on the basic principles. To date, this agreement is undergoing internal approval in the ministries, and upon completion we intend to sign it," Nogayev assured.

According to the minister, the actual amount of oil and oil products that will be supplied from Belarus, under this agreement, will be approved by indicative plans, taking into account the capabilities and interests of Kazakhstan.

“Regarding oil transportation through Russia, these are the obligations of the Belarusian side. If, within the framework of the agreement, Belarus expresses a desire to take it by other means of transport, we will not object,” the minister said.

Regarding the issue of transferring CHPP-2 in Almaty to gas, Nogayev stressed that this is a technologically very complex project. In order to fulfill the plans for converting the station to gas, it is necessary to carry out certain work and solve complex problems.

Answering the question of journalists about refusing to use gas cylinders, the minister noted that it will not be possible to completely refuse from explosive gas cylinders, because remote villages, some enterprises still use this gas.

‘’Probably, the recent explosion, the tragic incident in Nur-Sultan is meant in raising this topic. The investigating authorities will figure out what the reason is. But at the same time, I would like to note that the operation and use of gas burners is a complex technological device associated with high pressure and high temperatures. Explosions are possible, therefore, strict compliance with the requirements for the use of burners, gas equipment, any technical equipment associated with the use of gas requires a very great responsibility. In this regard, I would like to draw your attention to the fact that these requirements are strictly observed,” Nogayev added.