Five-year plans of education and healthcare development, new minister of energy: How meeting of the Cabinet of Ministers took place 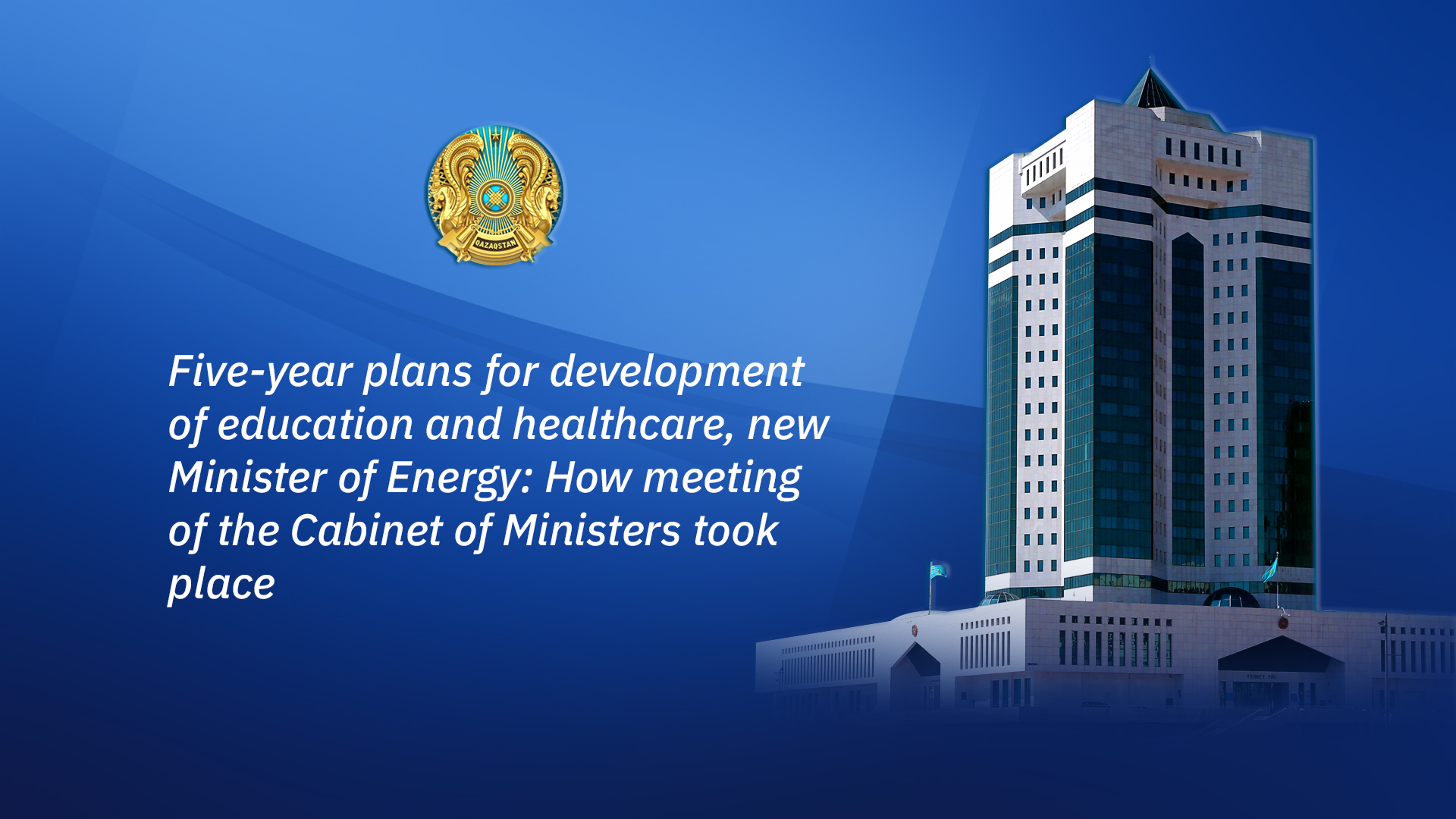 Regular meeting of the Government in an updated composition was held Dec. 19, 2019, in Ukimet Uyi. The Prime Minister Askar Mamin congratulated on the appointment of the new minister of energy, the ex-akim of Atyrau region Nurlan Nogayev. Traditionally, the meeting addressed a number of important issues, and a press conference was held following the discussions.

The first question was devoted to the implementation of the State Program of Education and Science Development for 2016-2019 and the project until 2025.

Minister of Education and Science Askhat Aimagambetov reported on the results achieved over the past period and the main directions of the new state program. The director of the IT school-lyceum of the city of Kokshetau A. Baltasheva spoke on behalf of the pedagogical community. 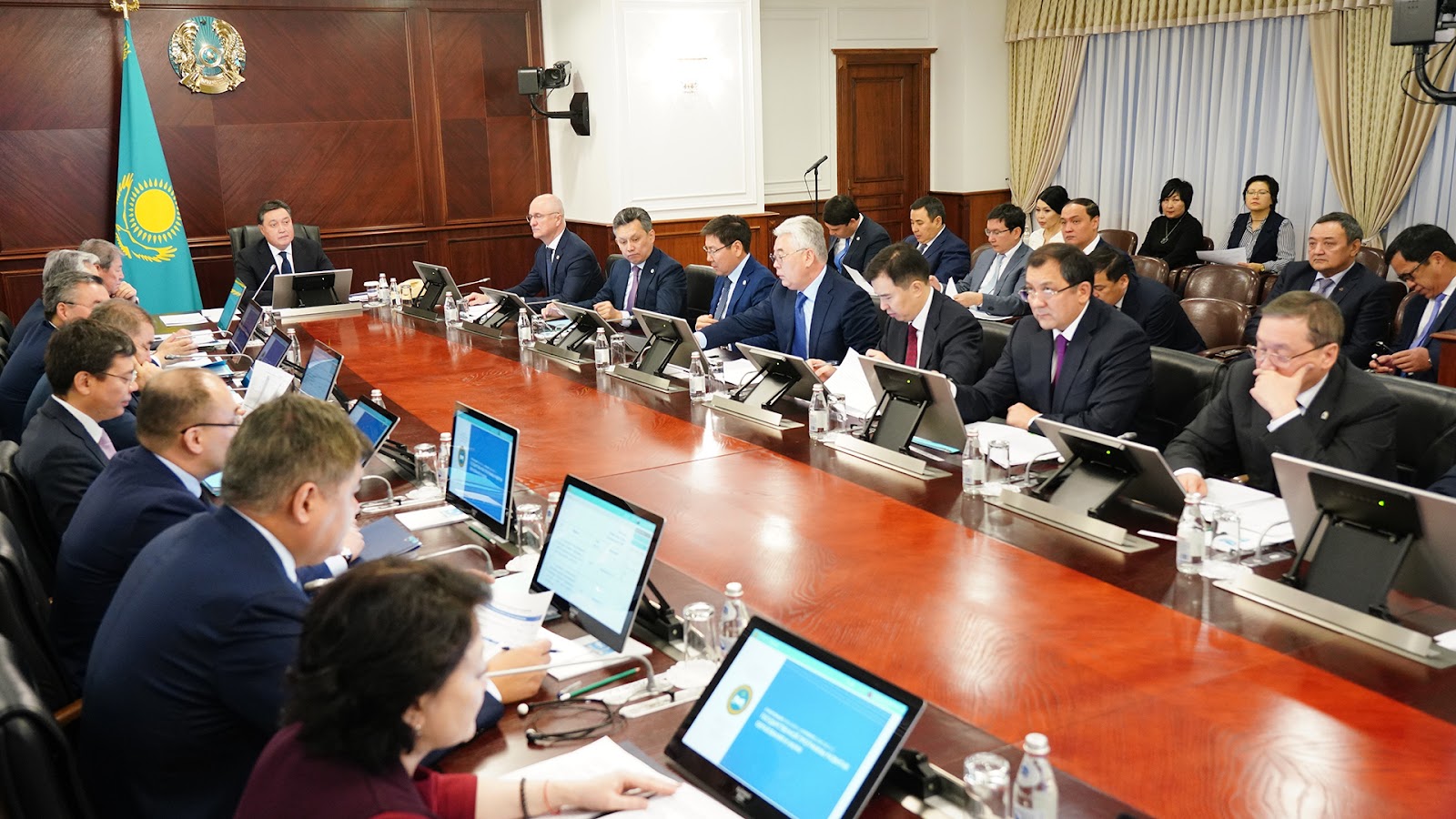 According to the results of the state program for 2016-2019, the network of preschool organizations was increased by 1,728, coverage of preschool education for children from 3 to 6 years old increased to 98%. Pupils of grades 1-10 (95.4%) switched to updated content. 273 thousand teachers (94%) are trained according to the updated curriculum and receive a surcharge of 30%. More than 123 thousand teachers who have passed certification receive additional payments from 30 to 50%.

437 public and 80 private schools have switched to per capita funding. 372 new schools built. R&D expenses increased by 1.6%, the share of business expenses for R&D (research and development) – by 6.6%, the share of commercialized projects – by 2.8%.

What tasks does the new state program pose for the next 5 years?

Mamin was informed that a gradual increase in the salary of 500 thousand teachers by 2 times is planned for four years.

At the same time, modernization of teacher education is provided, a change in the pedagogical experience of future teachers, 100% updating of curricula. All schools will be equipped with subject classrooms of a new modification. Much attention will be paid to raising the status of the teacher.

It is planned to 100% solve the issue of introducing special protection, video surveillance, safe transportation, reviewing norms and diets, a phased transition to cashless payments in canteens, per capita financing of state orders to support children with special educational needs, and the formation of cyber culture.

The head of government was informed that it is also planned to introduce a new format of school and parental communication, the implementation of “values-based education,” debate movement, introduction to the theater, further development of the movement Zhas Kyran, Zhas Ulan at all levels of education.

In addition, the procedure for submitting UNT is translated into electronic format, several types of grants are being introduced, and accessibility and transparency of higher education are ensured. By 2025, dormitories with 90 thousand beds will be built.

The program of free vocational education will annually reach 100 thousand students. And the number of students enrolled in dual education will reach 35%. The employment rate of college graduates will increase to 75%.

In general, funds for the implementation of the Program are provided in the amount of 11 trillion 578 billion tenge. In particular, the share of private investment increased and amounted to 1 trillion 284 billion tenge.

After hearing the report, the prime minister noted the importance of the growing attractiveness of the education sector for investors. In the next 5 years, 11.5 trillion tenge will be allocated to the industry, including 1.3 trillion tenge of private investment. This will make it possible, at the expense of private investors, to build additional schools for 150 thousand places.

“In order to increase the effectiveness of science for the country's economy, research activities will be modernized, and spending on science will be increased. Education financing will reach 7% of GDP,” said Mamin. 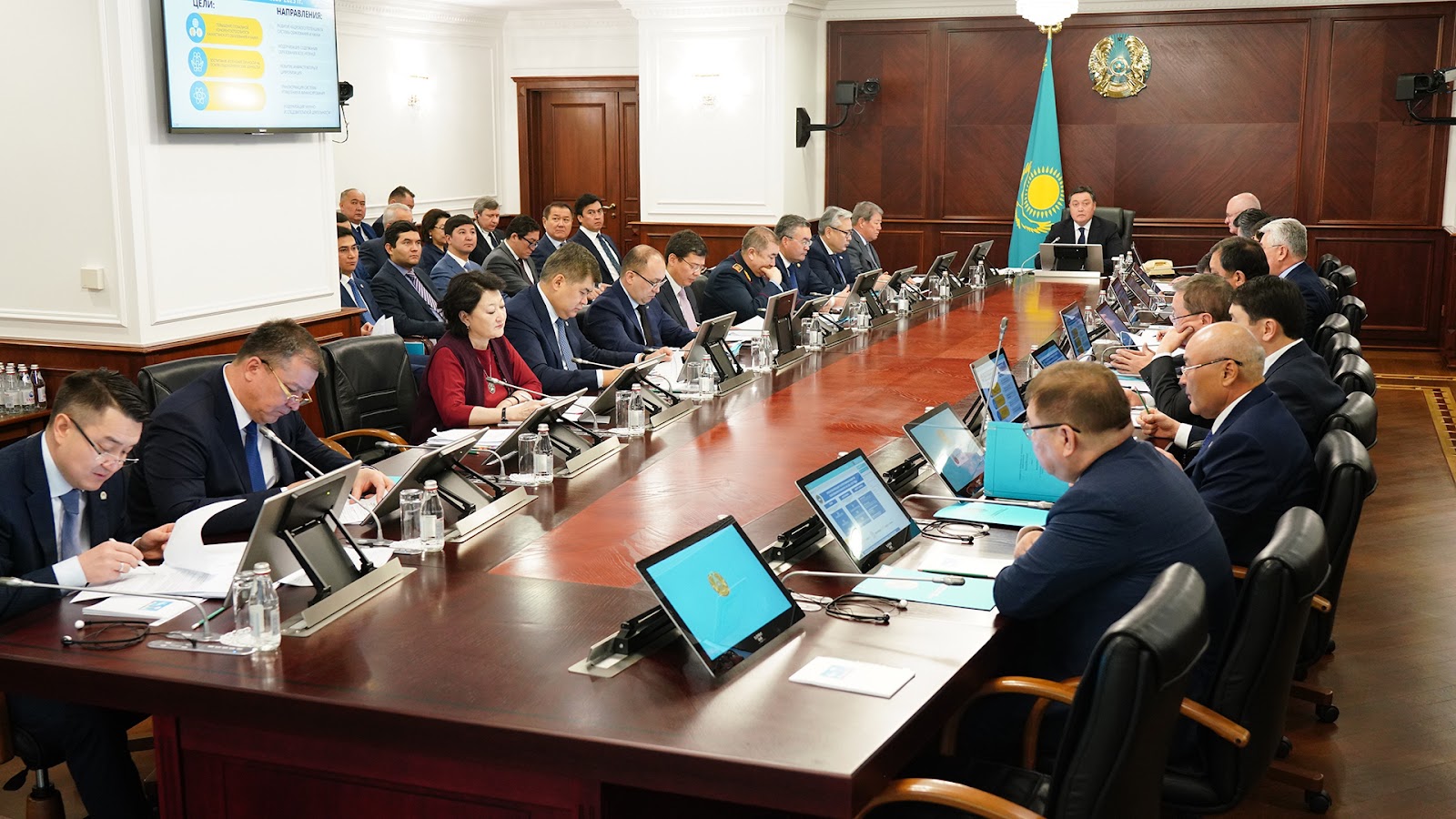 The prime minister instructed the Ministry of Education and Science to ensure that the program is launched from the beginning of the year and that the targets are achieved.

In the same year, a three-year state program for the development of healthcare, which also aims to improve the field of medicine in various fields, is also ending.

During the consideration of the issue on the implementation of the Densaulyq State Healthcare Development Program for 2016-2019 and the project until 2025, Mamin was informed that the basic medical and demographic indicators have been improved over the years of implementation. Life expectancy was 73.15 years. Total mortality decreased by 2%, maternal mortality – by 13%, infant – by 4%, mortality from tuberculosis – by 41%.

What tasks does the new Densaulyq state program pose for the next 5 years?

Health care costs per person per year will amount to 279 thousand tenge. Particular attention will be paid to the quality of food products, the fight against infectious diseases and the reduction of mortality from injuries and accidents.

A separate direction in the program is devoted to the prevention of diseases, with an emphasis on children and adolescents. It is planned to reduce mortality from suicides of adolescents aged 15 to 17 years by 4%.

Thus, the share of medical organizations with an integration platform will be 90%. The equipment with medical equipment will reach 100%, the depreciation level of buildings of medical organizations will decrease to 38%, the share of private investments from total will increase to 70%, the volume of investments in healthcare will amount to 2.8 trillion tenge.

Following the results of the Government session, Minister of Education and Science Askhat Aimagambetov took part in a press conference, where he answered questions of interest according to the implementation of the new state program. 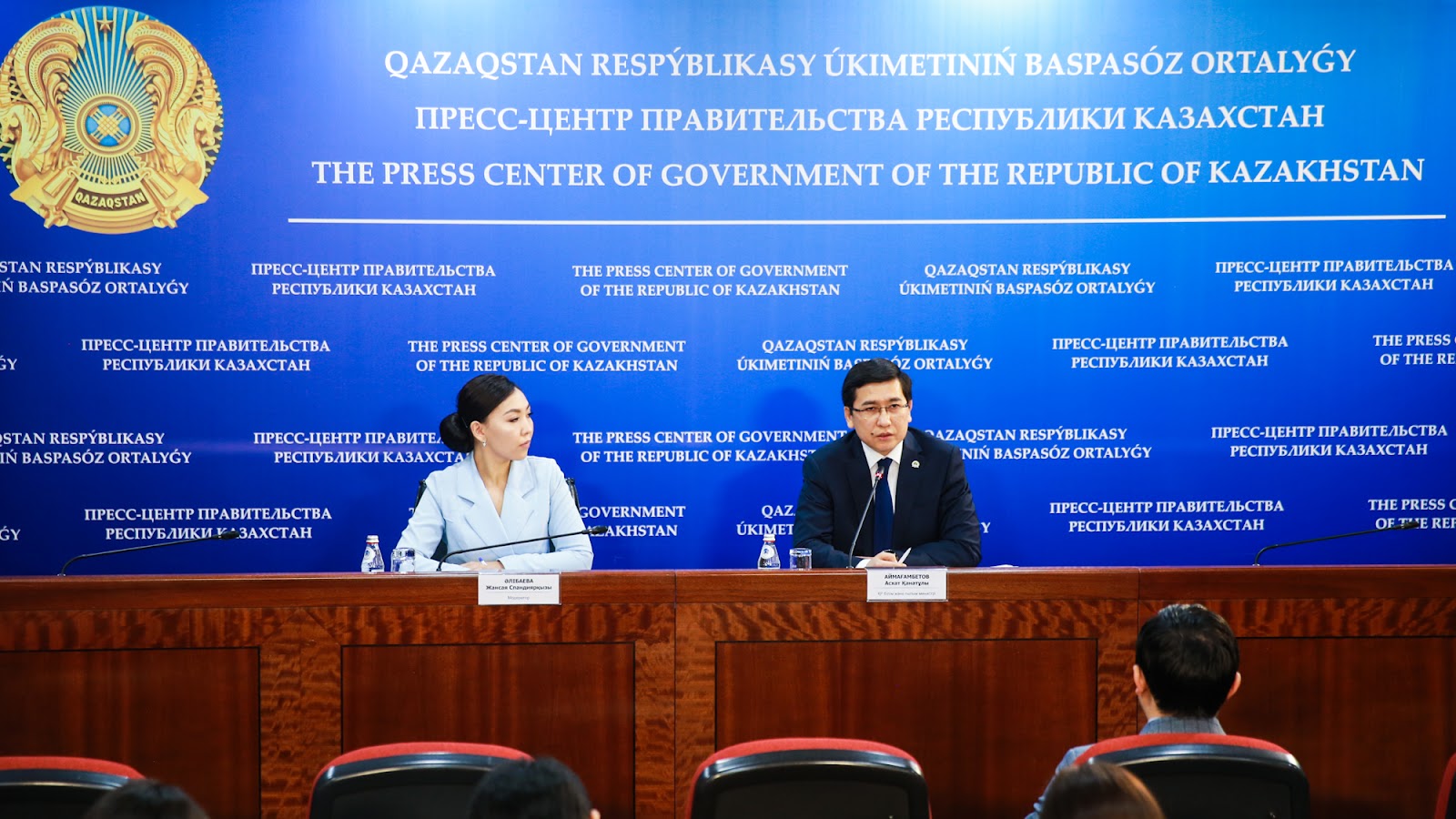 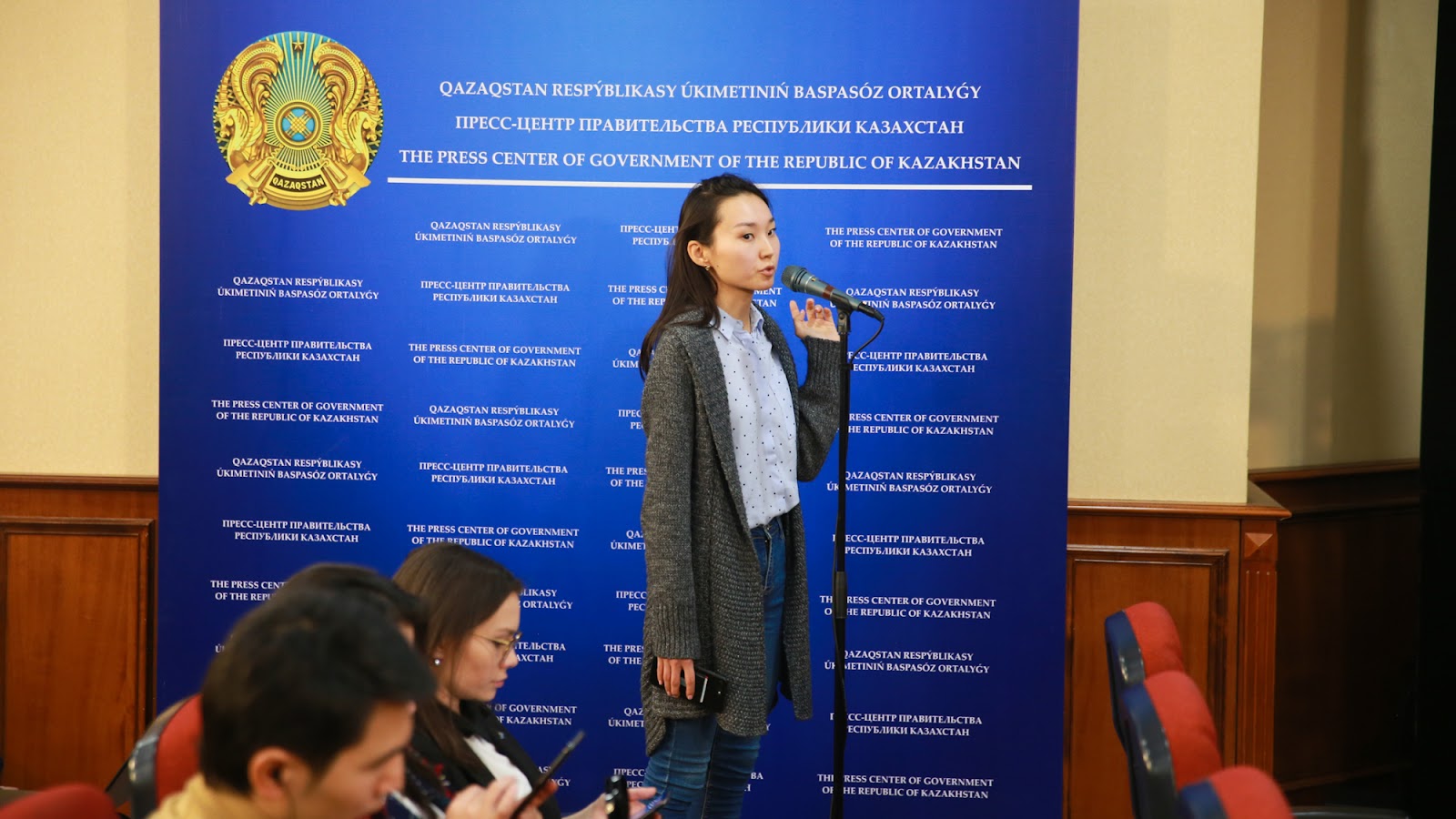 In other words, employers themselves form the necessary competencies that they expect from university graduates in one or another specialty.

In addition, the program of free vocational education will annually reach 100 thousand students. And the number of students enrolled in dual education will reach 35%. The employment rate of college graduates will increase from 63% to 75%. 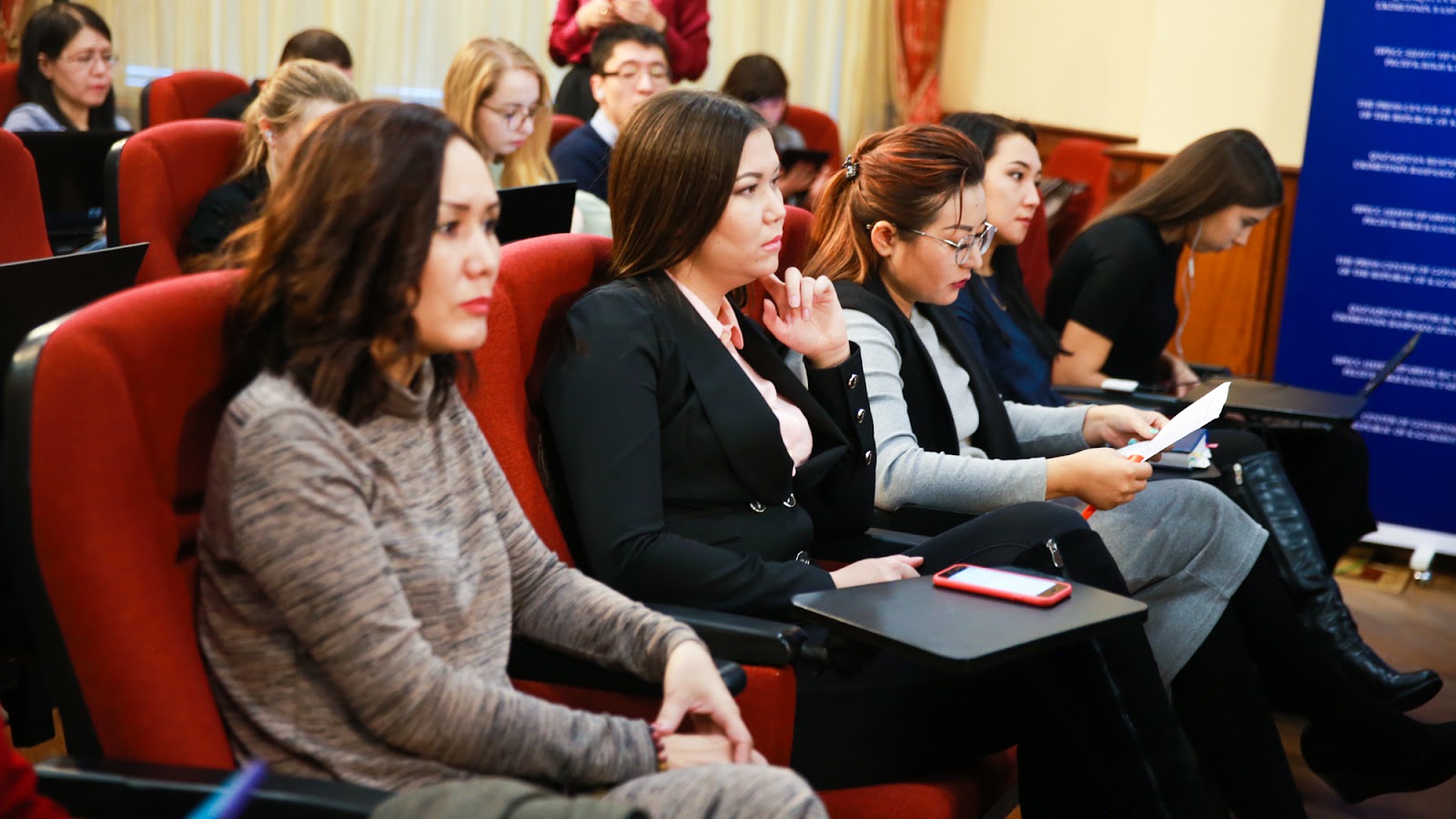 Aimagambetov also commented on the possibility of allocating a state order for additional circles in schools. 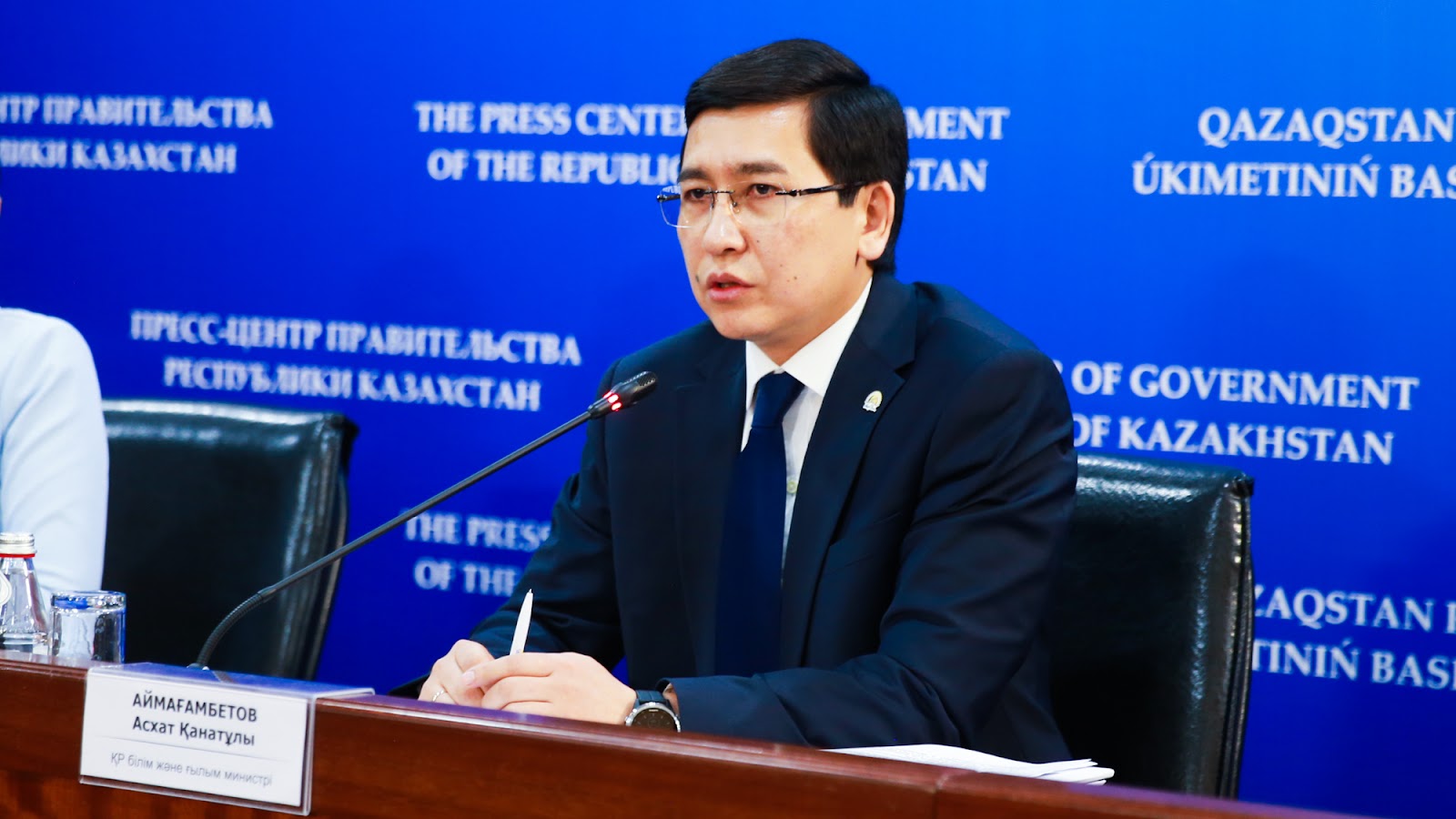 The correspondent of the republican television channel asked a question about home schooling without medical indications. Is this kind of training possible at the legislative level?

Aimagambetov explained that the ministry encourages schooling, as this gives the child more developmental benefits.

“Under the current legislation, we provide home-based education for those who have appropriate health indications. For this, conditions are created: a teacher comes, an individual program is compiled. In general, we are for children to specialize, learn with their peers and gain important life skills in society, so we believe that schooling is very necessary and vital, so we will create conditions for the child to be happy in school,” said the head of the ministry. 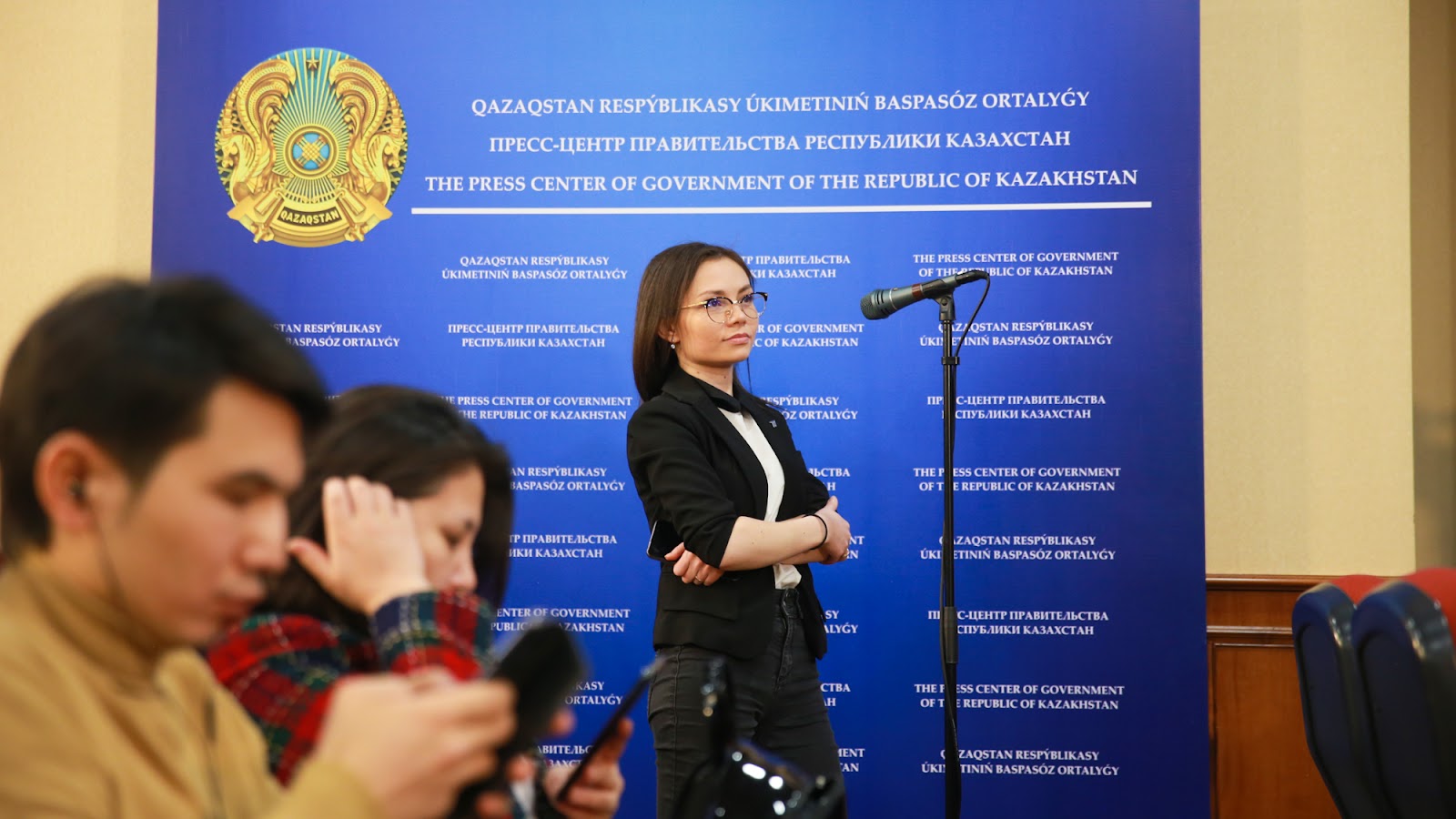 The correspondent of one of the news agencies asked the minister on the issue of ensuring the security of the educational process. 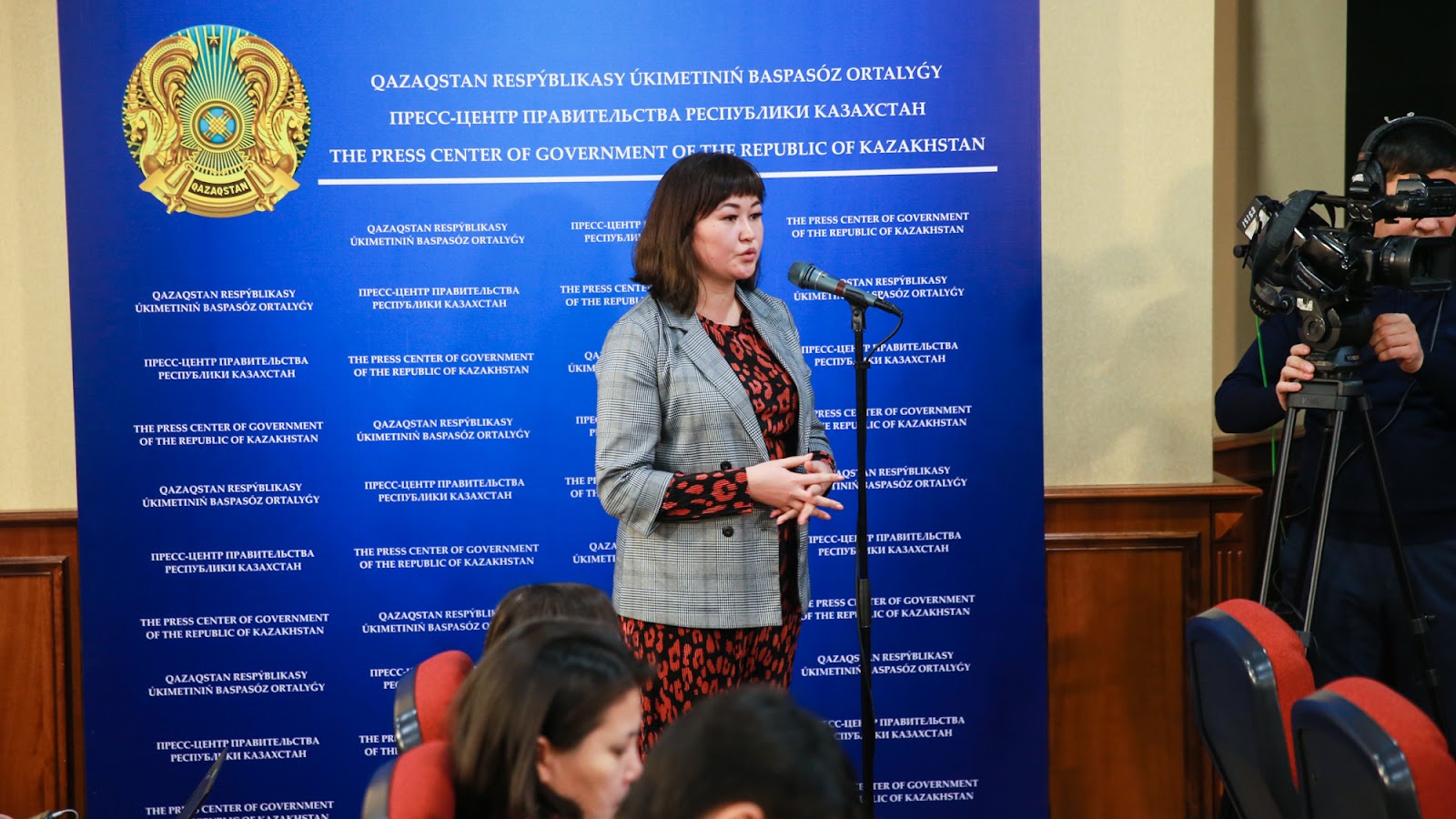 Aimagambetov noted that this issue is under special control, the responsibility of parents and schools is strengthened, all the necessary conditions for children are created.

“First, they are going to install video surveillance in those places where it is really needed. Second, the requirements for the number of days of recording will be taken into account. Third, the requirements for video permission are taken into account. Fourth, it is important that the signal from these cameras goes to the Rapid Response Center, where experts will monitor what is happening,” Aimagambetov said.

According to him, the state should fully provide schools with protection, including the issue of safe transportation of children.

“We set a goal for video cameras – by the end of next year, all local executive bodies should solve this problem: provide security, video surveillance and transportation. This is not such a big problem. There is no need to wait for 2025 for this. This can be done next year. The Ministry of Education will insist on solving this problem without delaying it for the future,” the minister said.