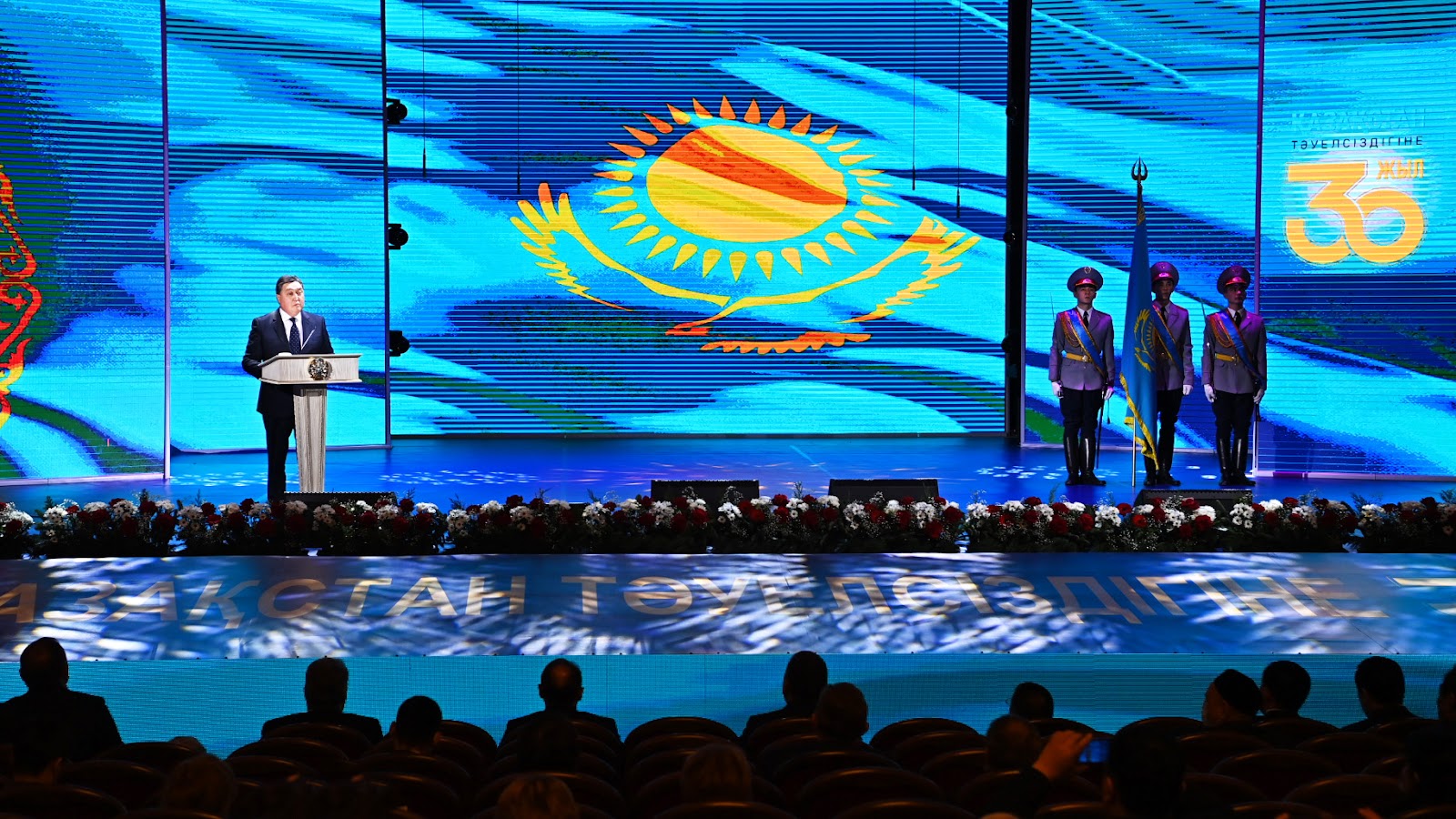 Prime Minister of the Republic of Kazakhstan Askar Mamin made a working trip to the Karaganda region, where he launched new production facilities, as well as social and cultural infrastructure, and presented state awards to residents of the region.

In his speech at the solemn event dedicated to the 30th anniversary of the Independence of the Republic of Kazakhstan, Mamin noted that the Karaganda region has a high economic potential and makes a huge contribution to the socio-economic development of the entire country.

The region produces a fifth (or 21%) of all processed products in the Republic of Kazakhstan and is rightfully considered a powerful industrial center, occupying a leading position in the country.

The industrialization program made it possible to organize in the region the production of dozens of new types of products with high added value that had not been produced before.

Together with foreign partners, the region is implementing projects for the assembly of passenger buses, quarry and road equipment. It is planned to produce 1,100 buses and 400 units of special equipment and special vehicles annually.

The implementation of a large project for the production of car tires with a volume of 3.5 million units per year for passenger cars, light trucks and trucks has begun, with subsequent sales in the domestic and export markets. In the future, it is planned to expand the plant's capacity to 9 million tires per year.

The transport infrastructure is being actively modernized, kindergartens, schools and medical and sports facilities are being built. During the years of independence, 8 million square meters of housing have been built.

As part of the further development of the region's potential until 2025, it is planned to implement more than 150 significant investment projects totaling 3.5 trillion tenge in such promising industries as construction, metallurgy, chemical industry, energy, mining and metallurgical complex, production of building materials, mechanical engineering and others. 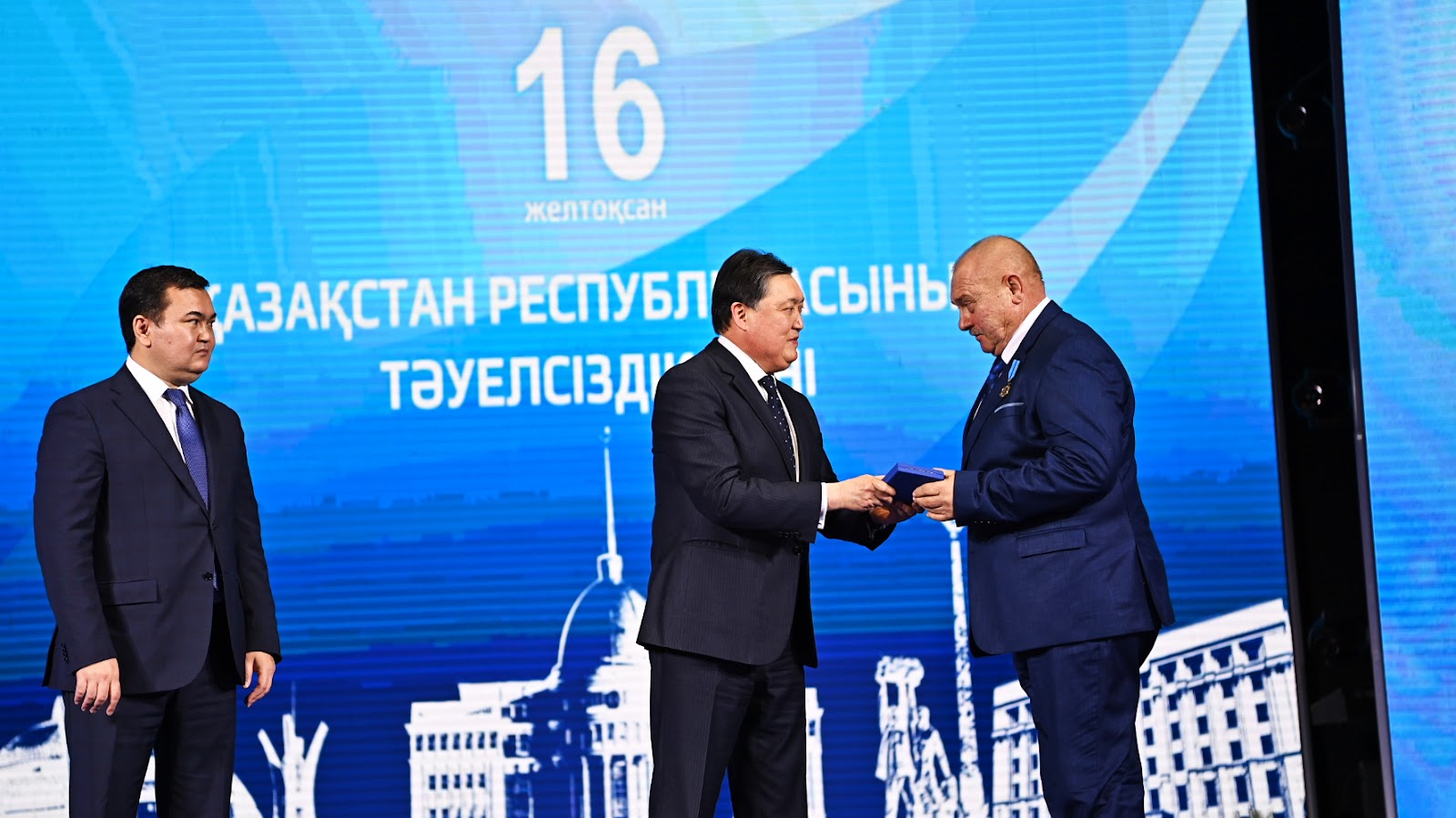 In accordance with the Decree of the Head of State Kassym-Jomart Tokayev, the Prime Minister of the Republic of Kazakhstan Askar Mamin presented state awards to the heads and workers of agricultural and industrial enterprises, civil servants, employees of the spheres of education and science, health care, culture and entrepreneurs of the Karaganda region.

Yerlan Nigmatulin, founder of YDD Corporation LLP, was awarded the Order of Barys of the III degree; Qurmet Order was presented to Director of the Multidisciplinary Hospital No.2 in Karaganda Arystan Magzumov, Chair of the Board of JSC Zhairem Mining and Processing Plant Sergey Bartosh, labor veteran Yerlan Smailov, General Director of Karaganda Pharmaceutical Complex LLP Sergey Baron, Head of the Regional Specialized Boarding School-College of the Olympic Reserve named after Aliya Moldagulova Erden Khalilin.

The Shapagat medal was awarded to the director of the polyclinic No.5 in Karaganda, Maral Bayazitova, and the head of the neurosurgical center named after Professor Makazhanova, Gabit Makhambaev.

The Certificate of Honor of the Republic of Kazakhstan was presented to the director of the Ushtobinsky pivotal school Saule Artykbaeva. 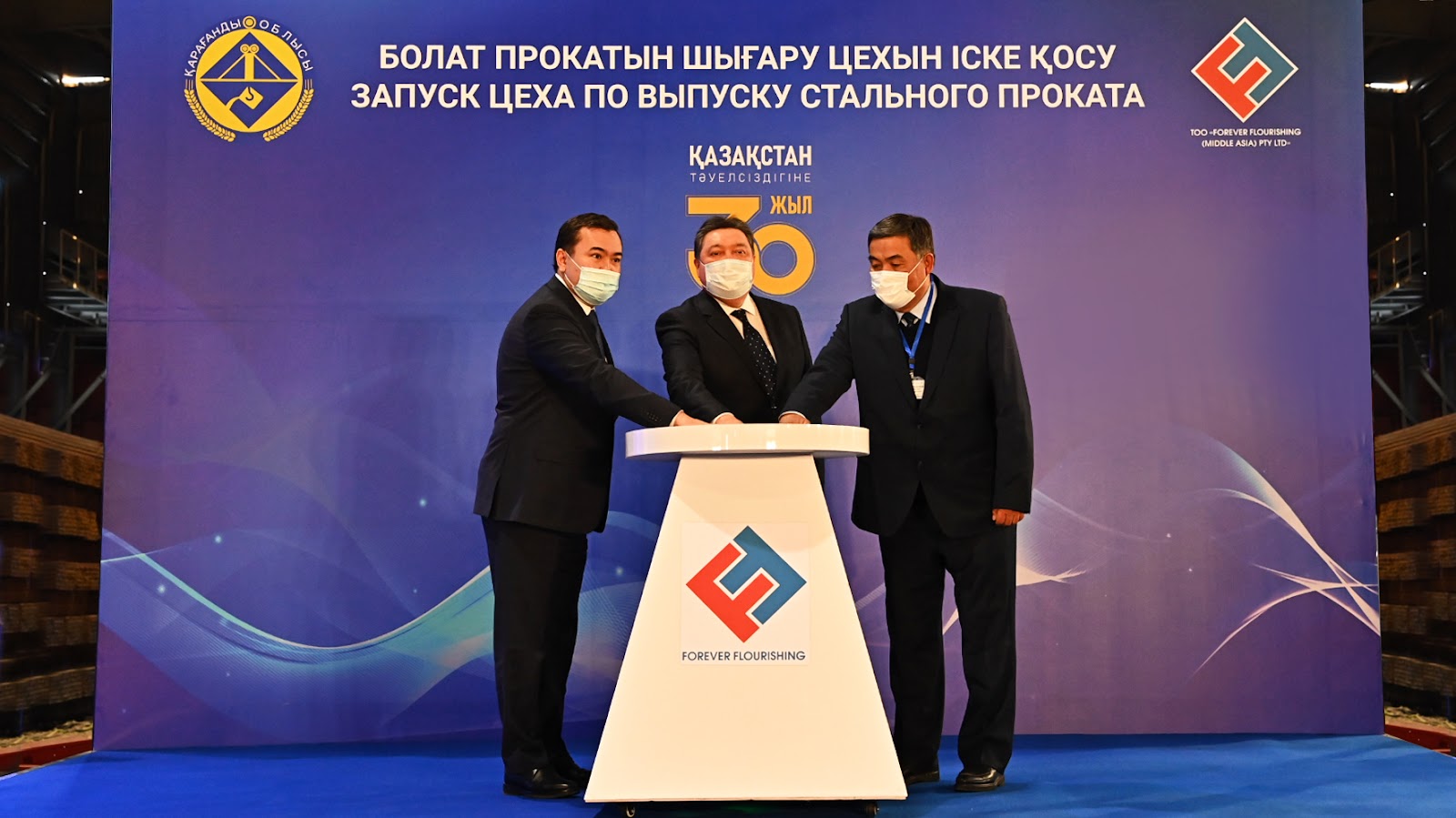 During the working trip, the Head of Government took part in the launching ceremony of the II phase of the Forever Flourishing (Middle Asia) Pty Ltd project — a line for the production of rolled steel and channels. The production capacity will be 90 thousand tons of products per year. The project will provide the country's construction industry with rolled steel and increase the export potential of the manufacturing industry. 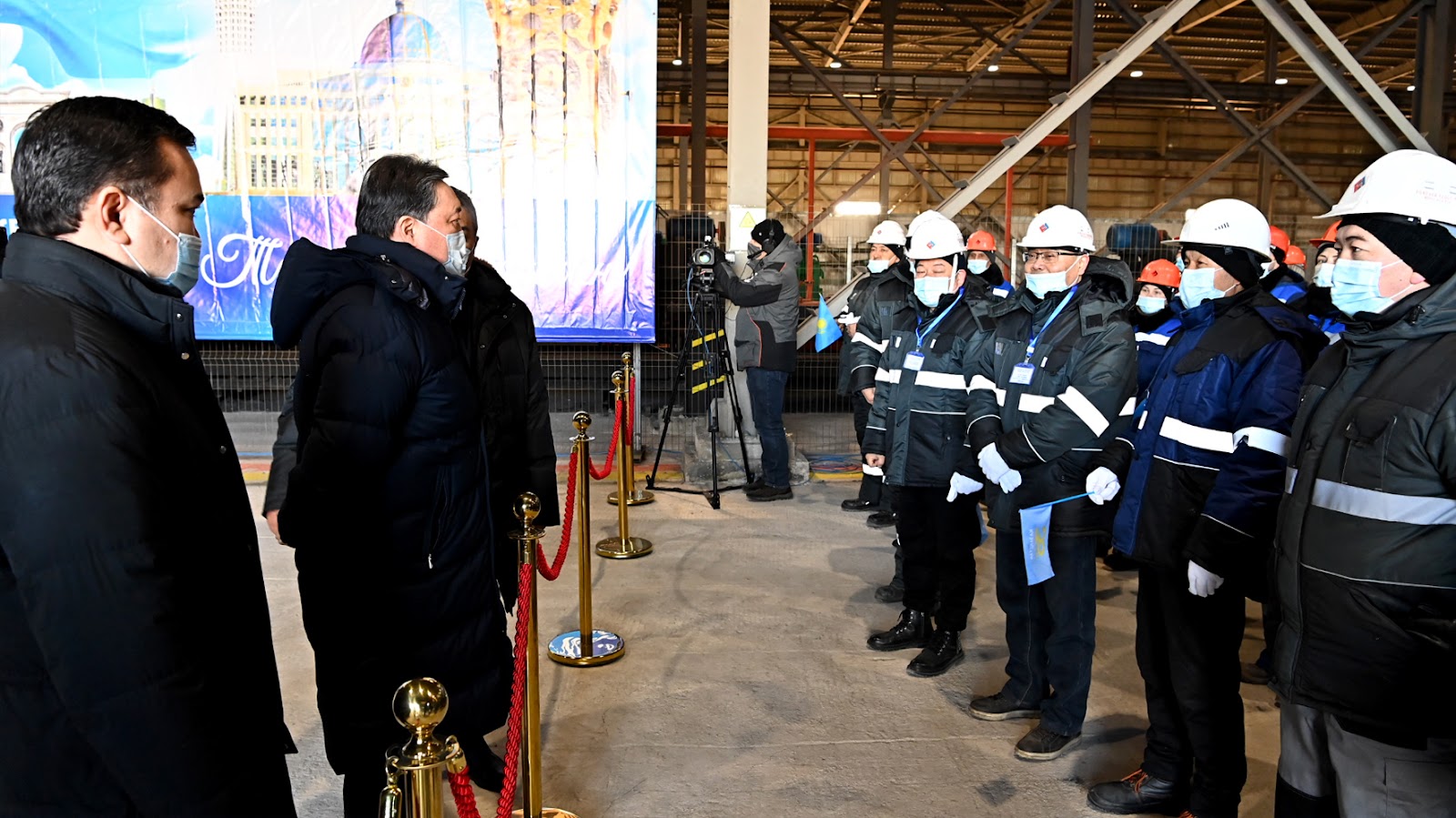 The Prime Minister visited the Saran industrial zone in the city of Saran, where he got acquainted with the implementation of the joint project of the Allur group and Tatneft on the construction of the KamaTyresKZ tire plant with a capacity of 3.5 million tires per year. Nail Maganov, General Director of PJSC TATNEFT, reported that to date, 78% of design work and 20% of construction and installation work have been completed. Completion of construction is scheduled for the 4th quarter of 2022. The company will create over 1,100 new jobs. 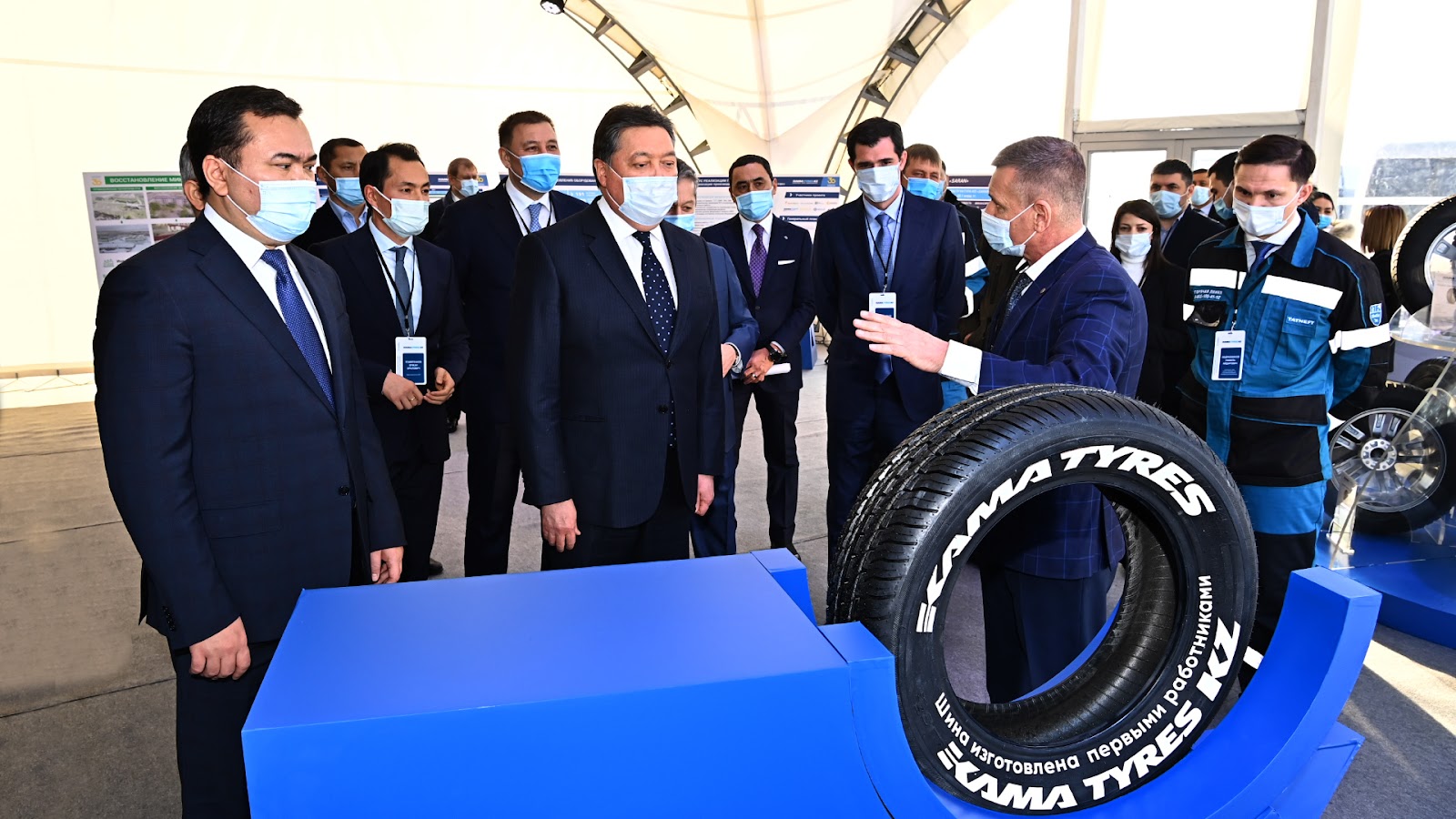 The Head of Government was shown the first tire produced by the specialists of the future plant, who are being trained in Nizhnekamsk (Tatarstan) at the largest enterprise of the tire industry in the Russian Federation. 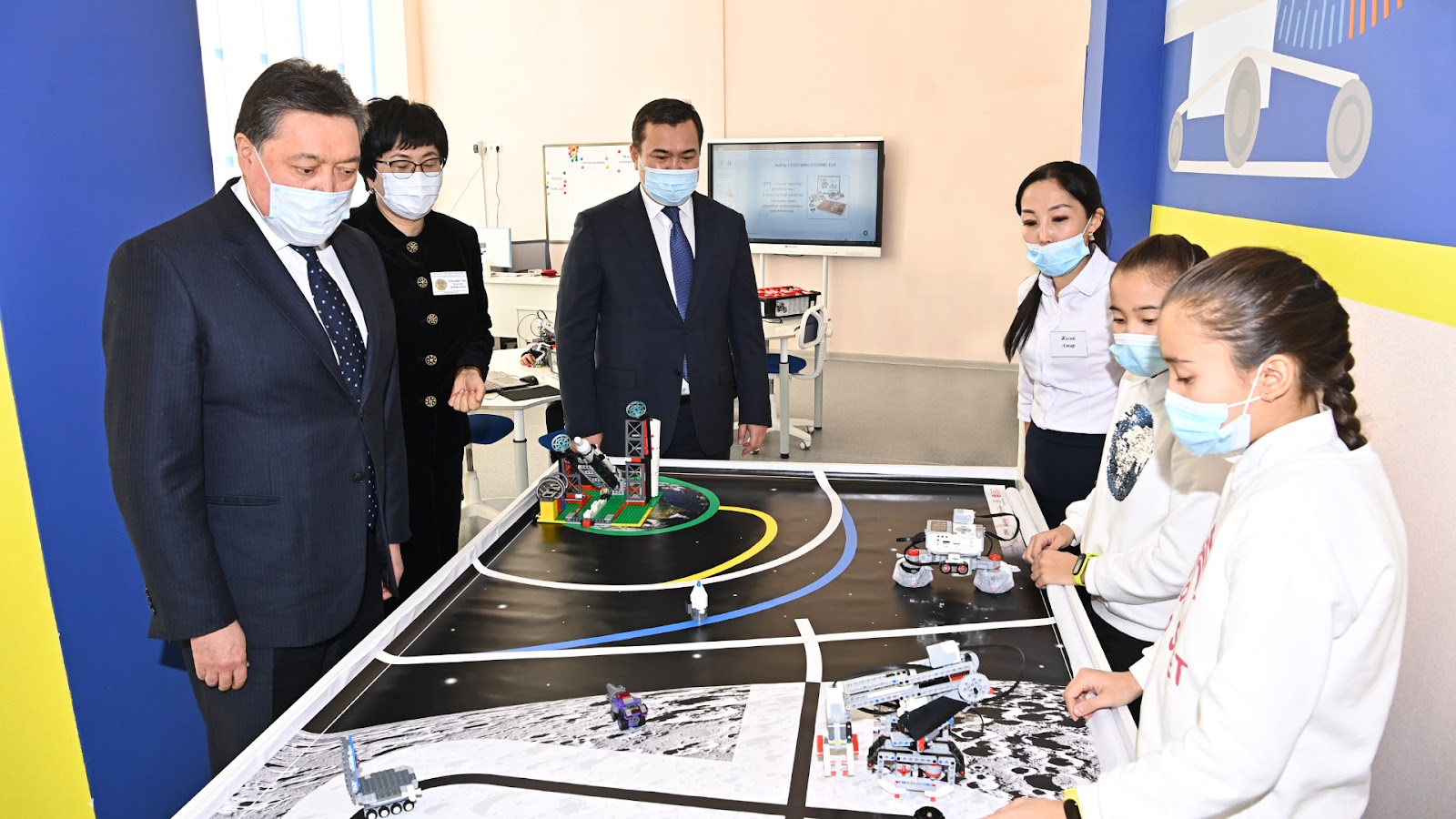 Askar Mamin also visited the new Palace of Schoolchildren with an area of ​​about 12 thousand square meters, where conditions have been created for children to study in scientific and technical, musical and aesthetic, psycholinguistic, artistic and other areas.