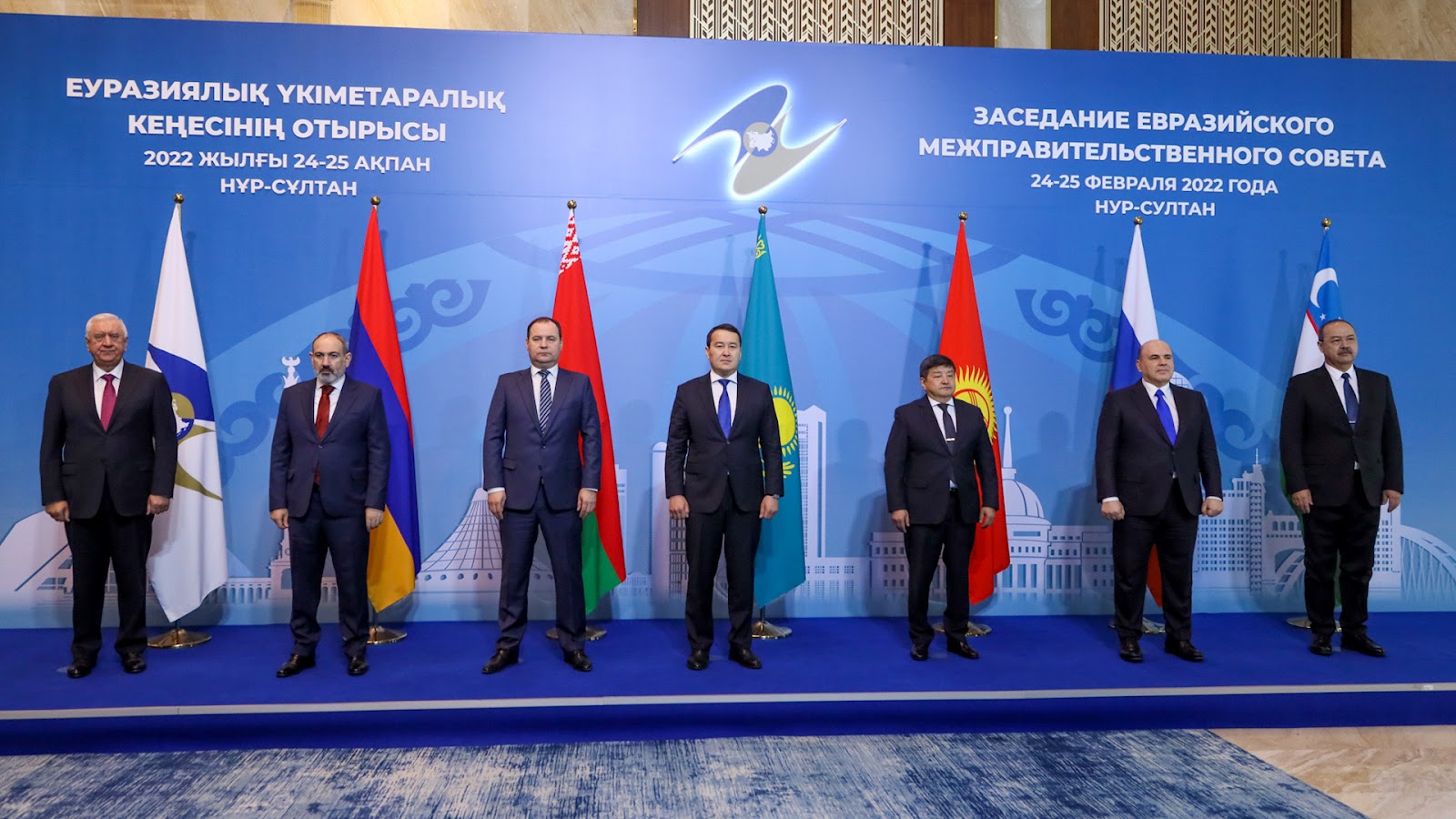 Prime Minister of the Republic of Kazakhstan Alikhan Smailov took part in the meeting of the Eurasian Intergovernmental Council in Nur-Sultan.

During the meeting, 15 issues were considered on trade and economic cooperation and the expansion of mutual trade between the Member States of the Union, the removal of barriers within the EAEU internal market, as well as the development of integration potential in certain sectors of the economy.

The meeting was attended by the heads of government of the Republic of Armenia — Nikol Pashinyan, the Republic of Belarus — Roman Golovchenko, the Kyrgyz Republic — Akylbek Zhaparov, the Russian Federation — Mikhail Mishustin, as well as the representative of the observer states, the Prime Minister of the Republic of Uzbekistan Abdulla Aripov. 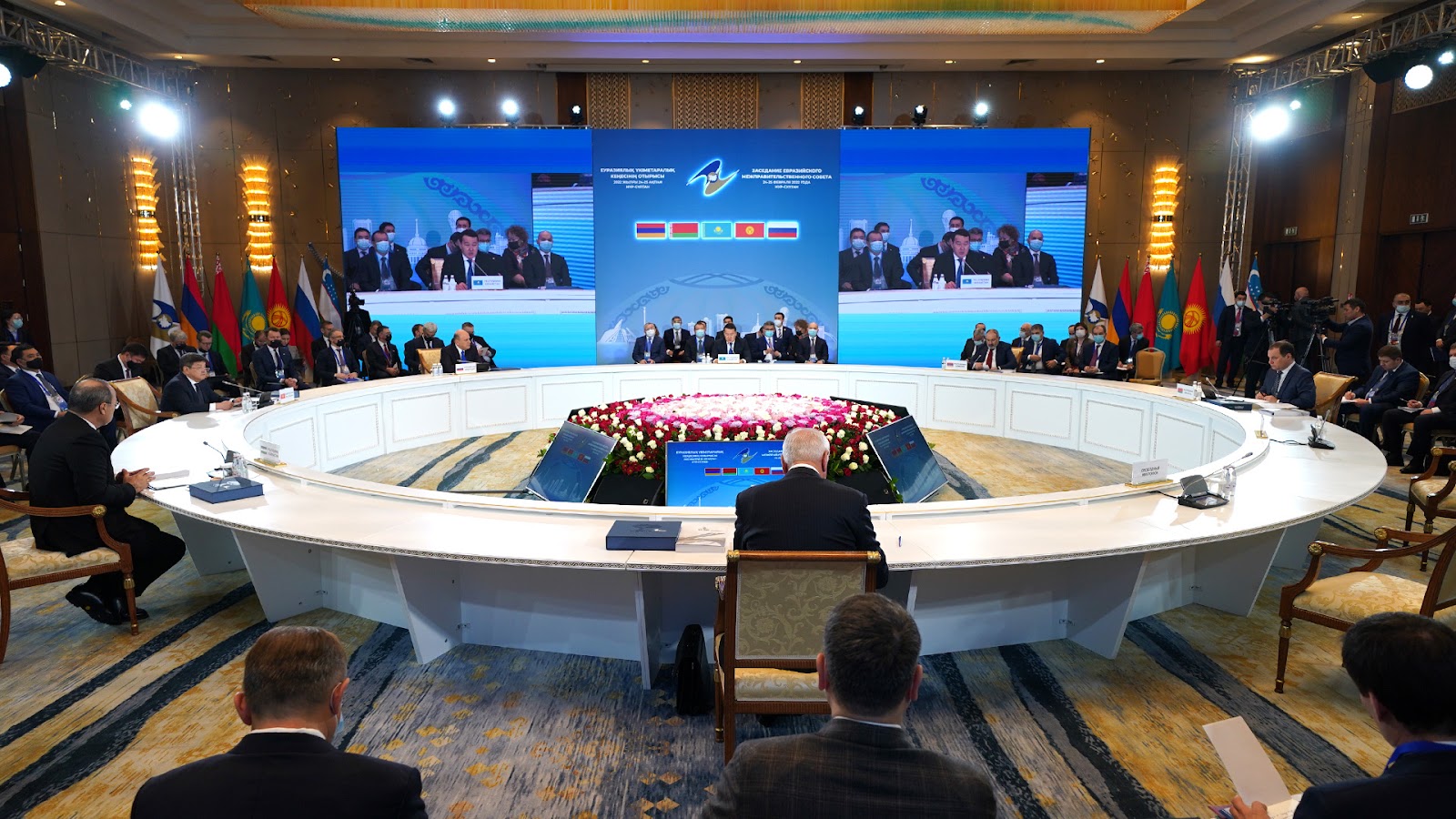 Traditionally, the meeting of the Intergovernmental Council was held in narrow and extended formats.

In a narrow format, the participants exchanged views on topical issues of economic cooperation, discussed a number of important issues aimed at developing economic integration in the Eurasian space. In particular, the issues of developing cooperation in the areas of electronic commerce, the implementation of accelerated container rail transportation of agricultural products, as well as the prospects for the development of an integrated information system of the Eurasian Economic Union were discussed. Mutually acceptable decisions were reached during the discussions.

At the meeting in an expanded format, a number of important issues were considered, including the macroeconomic situation in the EAEU member states and the implementation of the Agreement on the mechanism of traceability of goods. Following the consideration of these issues, specific instructions were given.

The Prime Minister of the Republic of Kazakhstan Alikhan Smailov, speaking at the meeting of the Eurasian Intergovernmental Council in an expanded format, said that the results of the past year testify to the outstripping growth dynamics of mutual trade of the EAEU member states compared to trade with third countries. Thus, the mutual trade of the EAEU member states increased by 18%, and the volume of foreign trade by 15%. However, the share of mutual trade is less than 15% of the total trade in goods.

The Prime Minister of the Republic of Kazakhstan emphasized that a significant part of the issues related to restrictions on access to the partner market, from year to year, does not find its solution. These are issues of access to public procurement, regional certification, unjustified application of sanitary, veterinary and other types of restrictions, customs control applied within states.

“If we are interested in creating a transparent market in the EAEU, we need to decide on basic shifts. We suggest that the Commission develop a methodology for the economic assessment of the applied barriers. In addition to stating the existence of a barrier, it is necessary to assess the damage to business and integration in general,” Smailov said.

At the same time, the Prime Minister of the Republic of Kazakhstan noted that an effective measure to promote the export of the EAEU member states to the markets of third countries is equal access to transport infrastructure, including seaports. The need to ensure it underlies the functioning of the Eurasian Economic Union.

“For the development of exports of our countries, it is important to resolve the issue of freedom of transit of goods. The proposed transit conditions often become an insurmountable obstacle to exports, which has an extremely negative impact on the sectors of the economy of states that do not have direct access to the sea. The Commission needs to take a proactive stance on these and other issues. It is unacceptable to act as an outside observer,” said Smailov.

Regarding the need to equalize the statistics of foreign and mutual trade and whitewash foreign trade flows, the Prime Minister of the Republic of Kazakhstan stressed that gray imports seriously harm domestic producers, legal importers, and negatively affect the budgets of the EAEU member states.

“At present, Kazakhstan, moving from words to deeds, has seriously strengthened customs control measures at the border with China. The measures taken only for two incomplete months led to an increase in the payment of customs duties and clearance of goods. At the same time, we began to observe a significant increase in imports from China to neighboring countries, which later enter the common market without proper customs clearance and tax payments,” Smailov said.

The Kazakh side considers it necessary to make joint efforts for the full and high-quality customs clearance of foreign trade, primarily in trade with China, urgent digitization of all processes and data exchange is required.

“This will give an impetus to the development of the processing sector, fair competition, and an increase in budget revenues from taxes and customs duties,” Smailov emphasized.

Summing up his speech, the Prime Minister of Kazakhstan noted that today, more than ever, it is necessary to intensify work to increase the economic activity of the EAEU member countries in the post-pandemic period. Only the concerted efforts of all parties are the key to improving the well-being of citizens. Kazakhstan is ready for systematic and consistent work to implement the fundamental principles enshrined in the law of the EAEU. 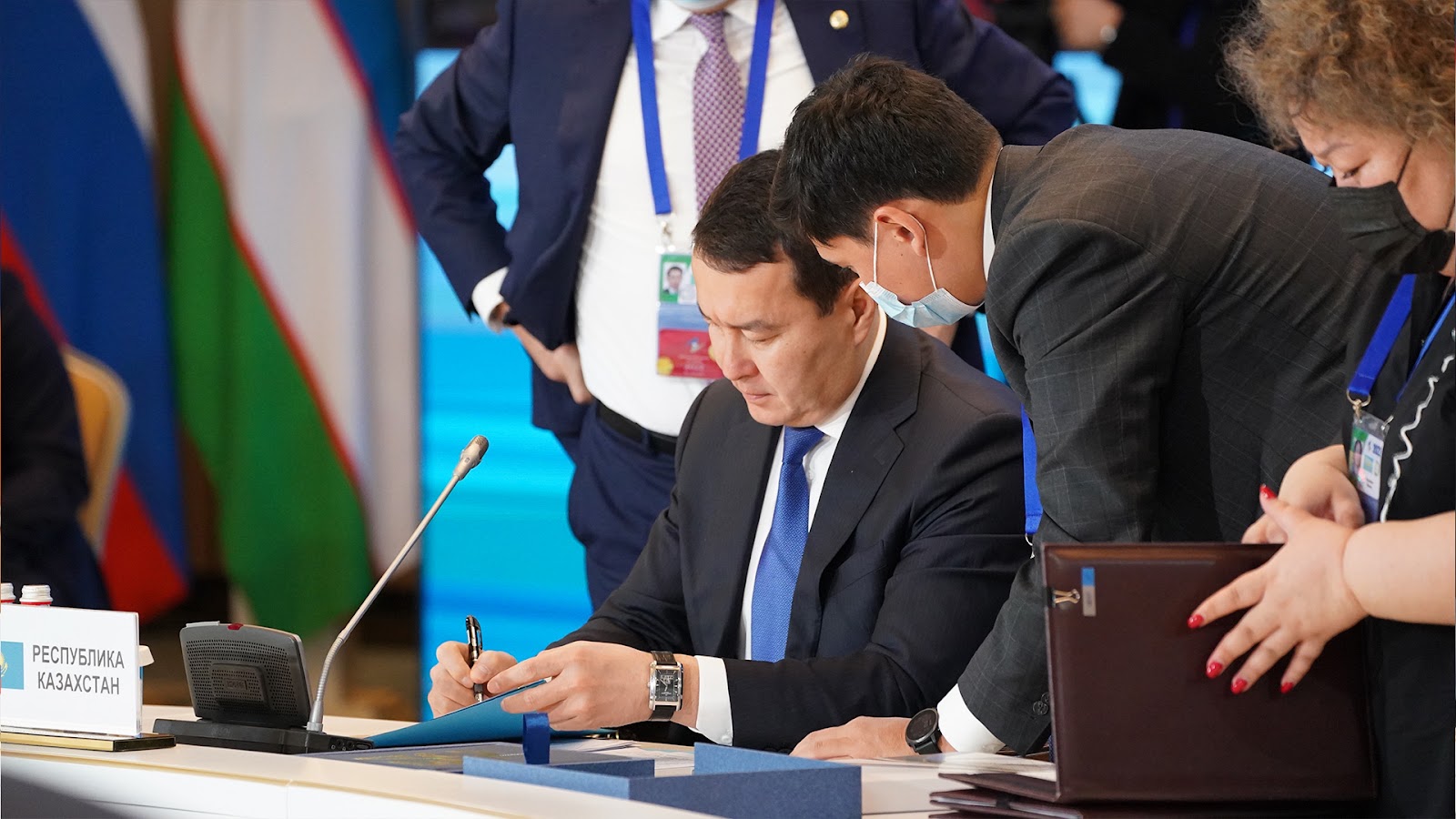 As a result of the meeting, a number of documents were signed, including an order on the macroeconomic situation in the member states of the Eurasian Economic Union and proposals to ensure sustainable economic development, an instruction on the implementation of the Agreement on the use of navigation seals in the Eurasian Economic Union to track traffic. The meeting participants also approved the Action Plan for expanding industrial cooperation in the field of civil aircraft manufacturing in the EAEU Member States for 2022-2023.

Concluding the meeting of the Intergovernmental Council, the parties agreed to hold the next meeting on June 21-22, 2022, in the city of Brest (Belarus).

Recall, this year is the first meeting of the Heads of Government of the member states of the Eurasian Economic Union. Previously, the meetings of the Eurasian Intergovernmental Council were held on Aug. 19-20 in Cholpon-Ata and on Nov. 18-19, 2021, in Yerevan.