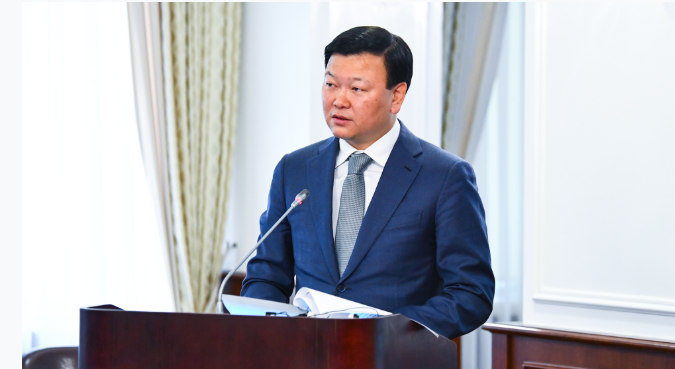 At the selector government session chaired by the Prime Minister Askar Mamin, the progress in the implementation of anti-epidemic measures was considered. The current situation on the spread of coronavirus infection in Kazakhstan was reported by the Minister of Healthcare Alexey Tsoy.

“For four weeks of quarantine, there is a 56% decrease in the occupancy of beds, including 36% in intensive care beds. The number of those who recovered increased to 69.4%. The number of ambulance calls, including those related to coronavirus, decreased by 40%. The reproductive rate of infection decreased by 24%, i.e., from 1.2 to 0.89. Thus, the main indicators of the burden on the health care system have been reduced,” Tsoy said.

Since July 23, there has been a steady downward trend in the rate of reproduction of infection, and as of Aug. 4, this figure has decreased to 0.89. This once again confirms the effectiveness of the introduced quarantine and the widespread measures taken to stabilize the situation. From an epidemiological point of view, it is important that this figure is below one.

As noted by Tsoy, on Aug. 4, the picture of the reproductive index, in almost all regions, except for Akmola, Kostanay regions, reached a turning point of no more than one.

“In connection with the change in approaches to accounting statistics from Aug. 1, the Ministry of Healthcare will recalculate the reproduction rate based on the data for the first ten days of August. We will continue to further assess the situation in the regions,” Tsoy stressed.

According to the minister, the requirement to wear masks affected almost every Kazakhstani. The ministry analyzed the international experience of the effectiveness of wearing masks. So, the multiplicative effect of the mask regime after 1 month reduces the effect of virus reproduction up to 4 times.

“As we reported earlier, if a person wearing a mask becomes infected by 30% less, which multiplyingly affects the number of infected people in one month from 300 to 85 infected, respectively. Together with social distancing, the multiplier effect reaches the level of infection rate of up to 1 person per month,” the minister said.

Tsoy also focused on the changes made to the order on the organization and conduct of sanitary-anti-epidemic and sanitary-preventive measures regarding the wearing of masks.

“Wearing masks is compulsory in public places, premises intended for visiting, serving and resting the population; in public transport; in public areas outdoors. Except for the following categories: children under the age of five; persons engaged in individual, group sports, no more than 5 people, subject to social distance; and persons with medical contraindications. It is also possible to be without masks in the open air in places of public catering while observing a social distance,’’ the minister informed.

As Tsoy emphasized, wearing masks should become a useful habit in society. Unfortunately, this is an urgent temporary need today. Mandatory provision of a mask regimen will be an additional factor for reducing the rate of increase in the spread of the disease, since it reduces the transmission of infection among the population.

“I want to draw your attention to the fact that due to the strengthening of sanitary requirements over the past four weeks there has been a significant decrease in the incidence in all regions. On average in the country, the daily incidence rate has decreased by almost one and a half times,” the minister said.