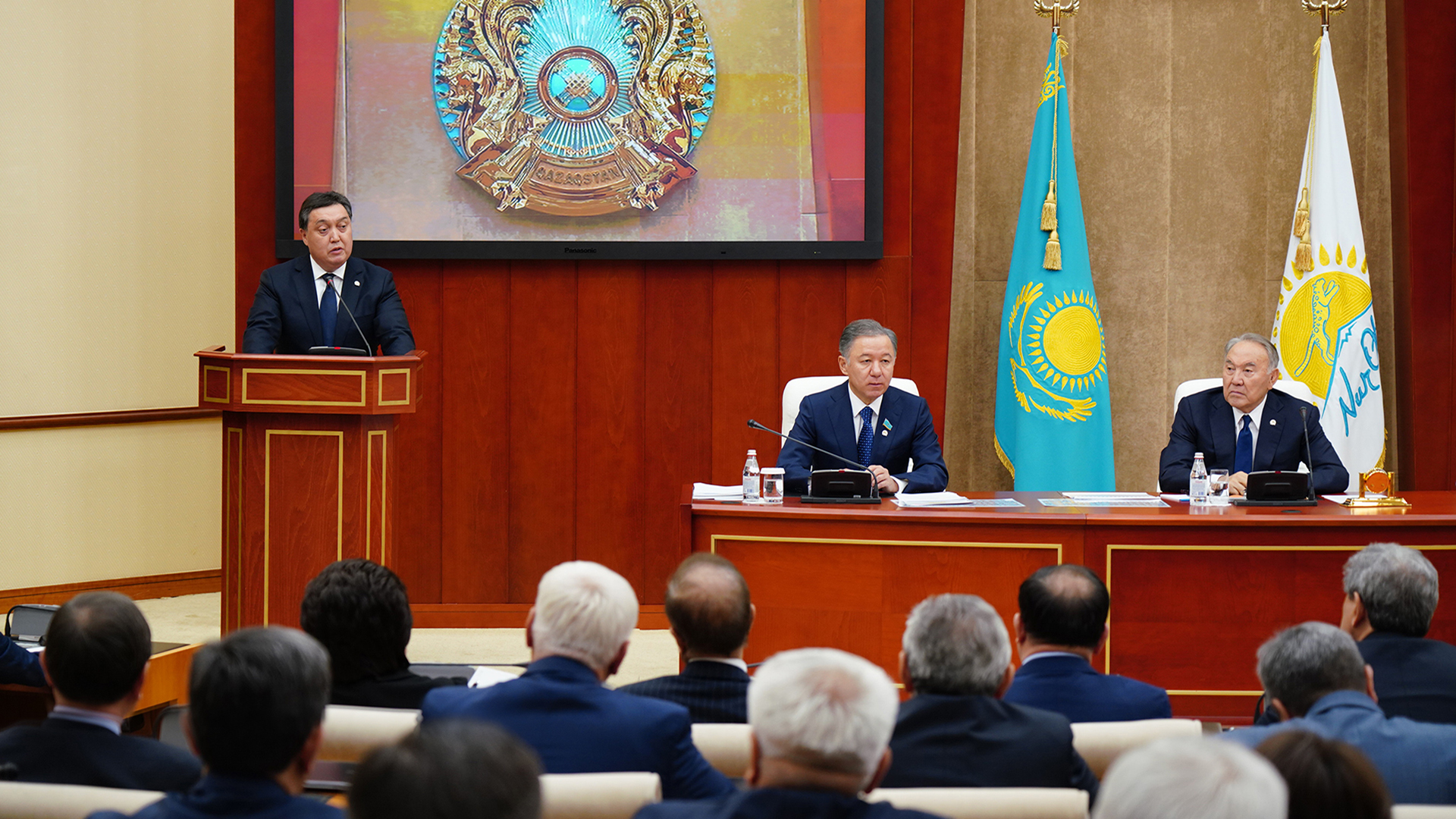 Prime Minister Askar Mamin reported to Elbasy Nursultan Nazarbayev and the deputies of the parliamentary faction of the Nur Otan party about the interim implementation results of the Nur Otan Party’s Election Program “Kazakhstan – 2021: Unity. Stability. Creation” and the Plan of the Nation “100 Concrete Steps to Implement the Five Institutional Reforms.”

Thanks to the Nurly Zhol program, Kazakhstan has become a transcontinental bridge between Europe and Asia, a large-scale modernization of transport infrastructure is underway.

“The optimal railway network has been fully formed. A logistics infrastructure is being formed. Next year, passage through the main transit automobile corridors will be provided,” said Mamin.

To provide broadband Internet access, 3,324 rural settlements (79%) were connected with a population of 250 people or more. The remaining villages will get the Internet access during 2020.

The state fully fulfills all social obligations. A new format of targeted social assistance is being developed. Since 2020, Compulsory Social Health Insurance has been introduced. From 2016 to the present moment, 390 secondary schools, more than 400 medical facilities have been built, centers have been created to provide assistance in heart attack and stroke.

“Particular attention is paid to providing Kazakhstanis with quality and affordable housing. In 2016-2018, over 34 million square meters were built. By the end of the year, it is planned to introduce 13 million square meters. m. A new housing program is being developed,” said Mamin.

Kazakhstan continues to pursue a multi-vector foreign policy, strengthens strategic cooperation with its main partners – Russia, China, the USA, the European Union, the countries of Central Asia and the CIS.

The prime minister spoke about the efforts of the Government and the Nur Otan faction to saturate the domestic market with domestic food products – on average, the supply of basic types of food products reached 80%, and for some items – 100%.

As part of the digitalization of economic sectors, new technologies are being introduced at the enterprises of the fuel and energy and mining and metallurgical complexes. As a result of the work carried out, in 2018 the volume of innovative products, compared to the previous year, increased by 25% and amounted to 1 trillion 179 billion tenge.

According to the results of 9 months of 2019, growth rates were 4.3%, compared with 2.9% at the beginning of the year. The government plans to bring the rate of investment in fixed assets to 30% of GDP by 2025. Today, a pool of investment projects has been formed that will attract 41 trillion tenge of investments in 2020-2024. The solution to this problem will ensure the inflow of foreign direct investment up to $34 billion, which is the basic condition for ensuring 5% growth of the national economy by 2024.

“The effective and targeted implementation of the election program of the Nur Otan party and the Nation Plan lay a solid foundation for the dynamic and quality development of our country today and in the future. Each event solves the most important issues of the development of modern Kazakhstan,”  Mamin emphasized.