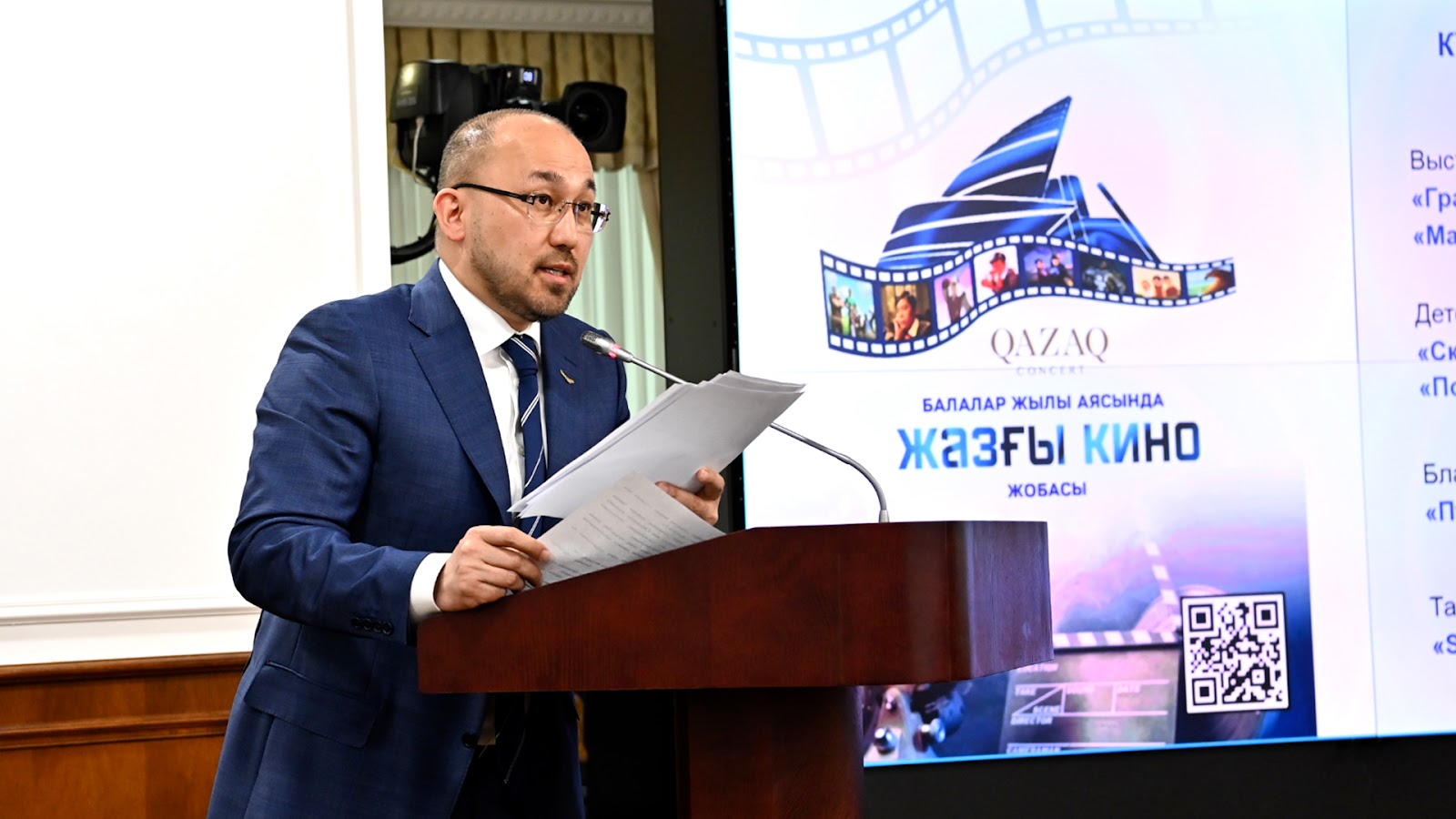 At the government session chaired by the Prime Minister of the Republic of Kazakhstan Alikhan Smailov, issues of the development of domestic tourism and national parks were considered. Reports were presented by the Minister of Culture and Sports Dauren Abayev, Minister of Ecology, Geology and Natural Resources Serikkali Brekeshev, Akim of Akmola region Yermek Marzhikpayev.

According to the Minister of Culture, at the end of 2021, an increase in the number of domestic tourists by more than 50% was recorded — this is 6.9 million people. This figure is higher than the pre-pandemic period by almost 300 thousand people. At the same time, following the results of 2021, the number of foreign tourists decreased due to quarantine measures and closed external borders.

In the regional context, there is a steady increase in the number of accommodation places and one-time capacity, with the exception of Karaganda, Pavlodar, Kostanay regions.

Along with this, there is a significant decrease in this indicator in Karaganda, East Kazakhstan, Pavlodar, Almaty, Atyrau regions and the cities of Almaty and Nur-Sultan.

According to the National Project for the Development of Entrepreneurship, it is planned to create 170 thousand jobs. At the end of 2021, the actual figure was 31,680 people out of the planned 22,000 people. The plan for the current year is 25,000 jobs.

Taking into account the measures taken by the state, infrastructure projects are being implemented. Thus, to date, the total need for tourism infrastructure in the regions of the Republic of Kazakhstan has amounted to 244 projects in the amount of 870.5 billion tenge.

The need for infrastructure projects in priority tourist destinations is 178 projects worth 422.8 billion tenge.

“In order to ensure the comfort and convenience of tourists, in addition to building infrastructure in the destinations themselves, it is important to pay attention to the development of infrastructure along the routes, as well as to develop the intangible components of the tourism product. For this, five priority routes in Kazakhstan have been identified, which will form the basis of the "Grand Tour of Kazakhstan". These are attractive routes that are already in demand,” said the head of the Ministry of Culture.

Despite the existing demand, not all routes are equally ready to receive a large number of tourists.

Separately, Dauren Abayev dwelled on the action of NeoNomad. The essence of the project is to form a list of places within Kazakhstan that are recommended for tourists to visit. Participants who visited all locations will be awarded with valuable prizes. Broad coverage of the project will draw attention to unique locations in the regions.

“The project covers 20 destinations in all regions, some of the objects are located along the grand routes. In the future, with the improvement of infrastructure and the expansion of grand routes, these locations can be combined into one large route in Kazakhstan,” he explained.

Among the projects introduced, the Minister of Culture and Sports noted the launch of the Caravan Saray complex in Turkestan, the Tetisblue theme park in Aktau, Swissotel and HolidayInnExpress in Almaty and other major investment projects.

In 2021, the volume of investments in fixed assets in the tourism sector amounted to 564.4 billion tenge. Planned indicators were achieved in eight regions.

For the period January-April this year. 75.6 billion tenge was attracted to the industry, the target for 2022 is 1 trillion tenge. Regions need to increase the pace of attracting investment.

The head of the department paid special attention to the state of toilets and proposed to intensify the work of the regions to attract private business to this issue.

At present, international flights have been restored with 25 countries along 80 routes, a visa-free regime has been resumed for 74 countries, and land borders have been opened. In the near future, the task is to further liberalize the visa regime.

Work continues as part of the digitalization of the tourism industry. At the moment, 3123 placements in all regions of the country are registered in the eQonaq system. 159,320 foreign tourists have been registered. Notifications were sent to the Migration Police system about their arrival.

“To assess the quality of work of tourism facilities, guides, travel companies, roadside services, a digital module has been created to receive complaints and feedback. The information received will be used to monitor the quality of tourism products, rank regions, identify and pinpoint deficiencies,” said Dauren Abayev.

Also today in Kazakhstan there is a shortage of qualified guides. The system of their training and certification requires modernization. To this end, work is underway to digitize a unified register of guides. The platform allows you to apply for registration of a guide, confirmation of certification, obtaining a QR code and a badge for use in work.

The system is a full-fledged database with the ability to search for guides and tour guides, and the QR code system, in turn, allows you to identify and exclude inactive guides from the register.

In the recently published global tourism ranking according to the World Economic Forum, Kazakhstan improved its position, rising from 80th to 66th place.

“Our country was highly rated in such indicators as “Price Competitiveness” (1st place), “Tourism Seasonality” (26th place), “Natural Resources” (33rd place), “Number of UNESCO World Cultural Heritage Sites” (42nd place) . Improvements were also noted in the prioritization of the industry and the development of infrastructure, where we bypassed such countries as Azerbaijan, Indonesia and Egypt,” the minister added. 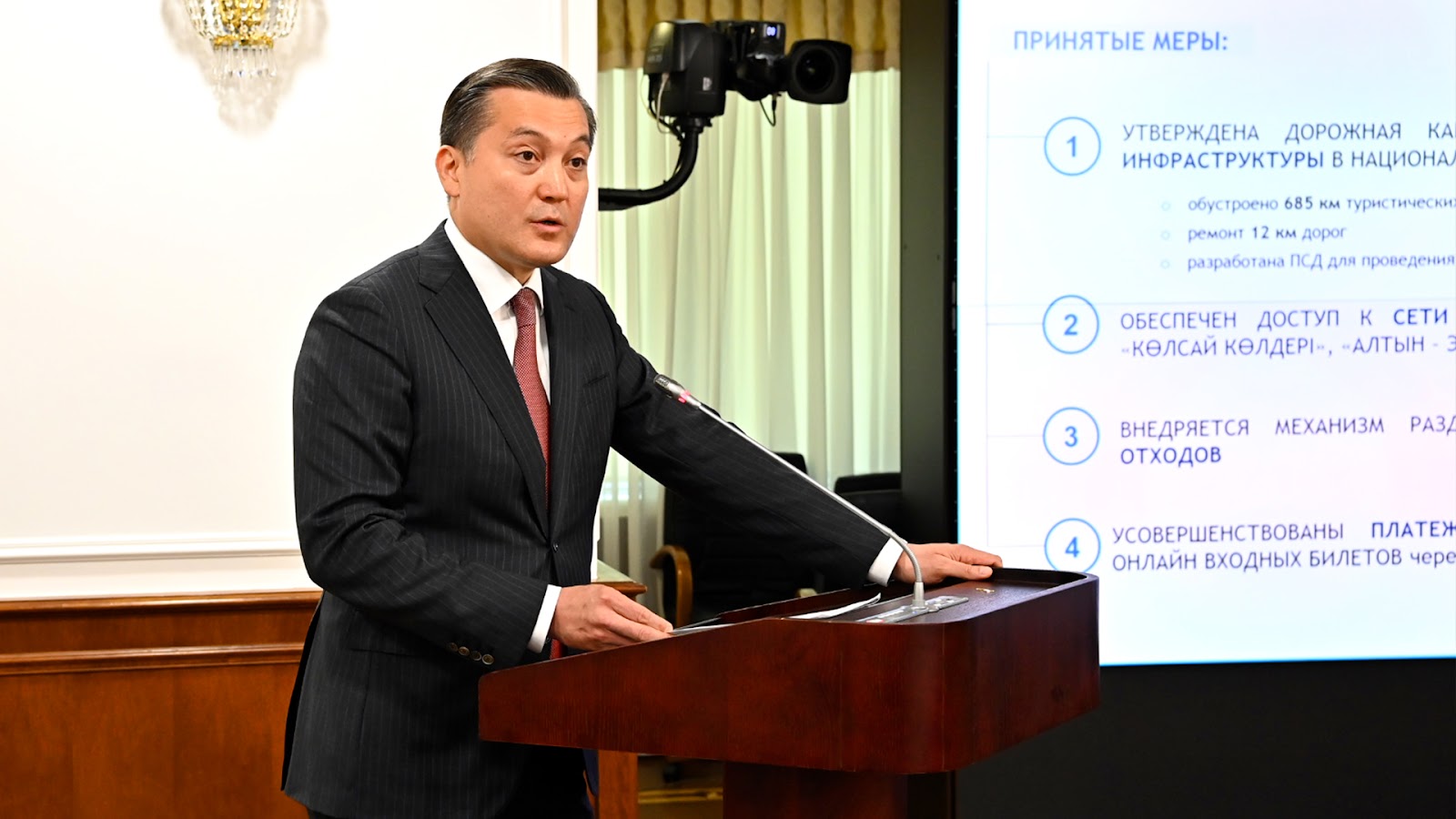 Serikkali Brekeshev reported on the development of ecological tourism in the national parks. Thus, according to the head of the Ministry of Ecology, there are currently 14 national parks in Kazakhstan with a total area of ​​2.7 million hectares.

The statistics of recent years show a gradual increase in the number of tourists. So, in 2021, about 1.5 million people visited the national parks, which is 40% higher than in 2020.

“The development of ecotourism in the territory of national parks is carried out taking into account international experience by arranging routes and trails. At the same time, it is planned to create modern visitor centers, glampings, campsites, Kazakh villages and places for caravanning. General development plans have been approved for all national natural parks, and they are being adjusted for some parks,” the head of the Ministry of Ecology said.

Taking into account the location and popularity of the national parks of the Almaty group, the Ministry of Ecology has begun active work on 4 parks - these are Ile-Alatau, Kölsay kölderi, Charyn and Altyn Emel. Master plans for the development of ecotourism have been developed. Investors identified. The total investment will amount to 26.5 billion tenge. In 2020-2021, about 2.0 billion tenge was invested as part of the implementation of projects. Work on the implementation of projects has already begun. So, in the Ile-Alatau National Park, a visitor center has already been erected from a light structure without capital construction in the Ayusay gorge, 5 glamping sites, 5 campsites have been installed, a 60-meter bridge across the Bolshaya Almatinka River has been built and trails around the Ayusay gorge have been equipped. Construction of 2 more visitor centers has begun. 220 jobs created.

For the rest of the national parks of the Almaty group, a preliminary assessment of the impact of the planned activities on the environment for the development of tourism infrastructure was carried out and small architectural forms were installed. Work continues. Work is also underway on engineering infrastructure and process automation.

Thus, together with the Ministry of Industry and Infrastructure Development and the Akimat of the Almaty region, a roadmap was developed and approved for bringing engineering infrastructure to the national parks of the Almaty region. 685 km of tourist routes and trails have already been equipped, 12 km of roads have been repaired and a design and estimate documentation has been developed for laying power lines.

Also, together with Transtelecom JSC, access to the Internet was provided for visitors to the Zerenda Lake of the Kokshetau National Park and the checkpoint of the Altyn-Emel National Park. Ile-Alatau, Kolsai Kolderi, Charyn, Zhongar-Alatau, Tarbagatai, Katon-Karagay, Karkaraly, Buiratau, Bayanaul, Kokshetau and Sairam-Ugam national parks are connected to kaspi.kz payment services for visitors to purchase online entrance tickets.

In addition, the Imantau-Shalkar resort area, in part of the land available for tourism development, is transferred as a pilot project to the Ministry of Culture and Sports to work on the construction and development of infrastructure, as well as attract private investors. In this regard, the master plan for the development of the infrastructure of the Kokshetau National Park, which is undergoing a state environmental review, has been adjusted.

In order to improve the legislative framework in the field of specially protected natural areas, a number of amendments are being worked out together with interested state bodies in terms of empowering the Ministry of Ecology with competence on the following issues:

First. On the transfer of lands of specially protected natural areas into reserve lands for the construction of mudflow-landslide-avalanche protection structures to ensure reliable protection of the population from the impact of natural hazards.

Second. On the transfer of lands of specially protected natural areas for the construction of infrastructure in terms of conducting communications and networks of engineering and communal support.

Third. On the transfer of lands of social and engineering infrastructure objects that are part of the SPNA lands to the lands of settlements.

Akim of the Akmola region Yermek Marzhikpayev reported on the dynamic development of the Shchuchinsk-Borovoye resort areas.

“There are 189 places of accommodation with a capacity of more than 3 thousand rooms on the territory of the zone. Due to the introduction of 2 hotels last year, the number of rooms was increased by 7%. The amount of investments amounted to 3.5 billion tenge,” the head of the region added.

This year, the Kedrovy Bor hotel was commissioned, and it is also planned to complete the construction of the 1st stage of the modern Akbura Resort. The amount of investments amounted to 4.7 billion tenge.

As part of the 3rd stage of the Development Plan for the Shchuchinsk-Borovoe resort area, 11 out of 27 events were implemented for a total amount of 8.1 billion tenge.

In addition, the implementation of 16 measures worth 21 billion tenge continues. This year, 3.3 billion tenge has been allocated for the completion of 5 infrastructure projects. Work is also underway to improve the recreational areas of the Burabay National Natural Park.

“29 ecological tourist routes have been prepared for the summer season. Systems of ecological monitoring and early detection of fires operate on the territory of the park,” said Marzhikpayev.

He also informed that about 600 tourism enterprises operate in the region. The number of employees amounted to 21 thousand people, with an increase of 13% by 2020.

Unfortunately, during the pandemic, the number of accommodation facilities has slightly decreased. At the same time, the one-time capacity has been increased by 1.5 thousand beds. Also last year, the tourist sites of the region were visited by more than 1 million people with an increase of 23%, of which about 3 thousand were inbound tourists.

“Taking into account the opening of borders this year, the flow of tourists is expected to increase to 1.2 million people, and by 2025 more than 1.6 million. In general, this year it is planned to implement 75 investment projects in the field of tourism for a total investment of 18 billion tenge,” said the akim of the Akmola region in conclusion.