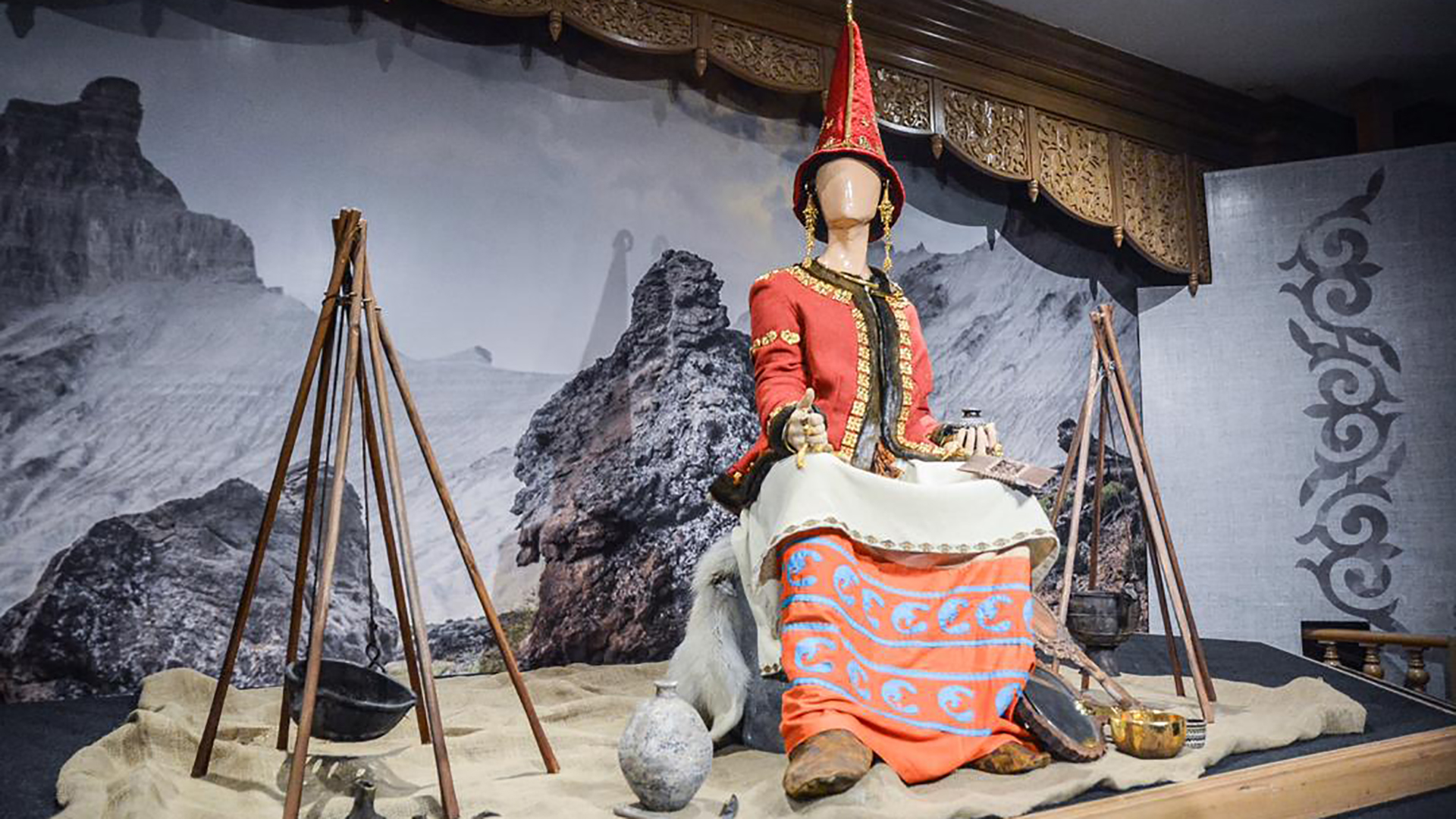 National Museum of the Republic of Kazakhstan opened the exhibition "The Great Steppe: History and Culture" on Oct. 1, 2019, in Kuala Lumpur, Malaysia. It will be held from Oct. 1 to Oct. 31, 2019, as part of the international project "The Procession of the Golden Warrior through the Museums of the World."

The opening ceremony was attended by the Director of the National Museum of the Republic of Kazakhstan Arystanbek Mukhamediuly, Minister of Tourism, Arts and Culture of Malaysia Datuk Mohamaddin bin Ketapi, Ambassador Extraordinary and Plenipotentiary of the Republic of Kazakhstan to Malaysia Bolat Imanbayev and Director General of the Museum Department Kamarul Baharin bin A. Kasim.

“With great pleasure I want to present you the exhibition ‘The Great Steppe: History and Culture.’ The exhibition introduces you to the masterpieces of ancient and traditional art of the Great Steppe and is the result of the project ‘The Procession of the Golden Man through the Museums of the World.’ The project has been implemented since 2017 and during this time, visitors to museums in Europe and Asia have already seen priceless works of the past,” said the director of the National Museum of the Republic of Kazakhstan. 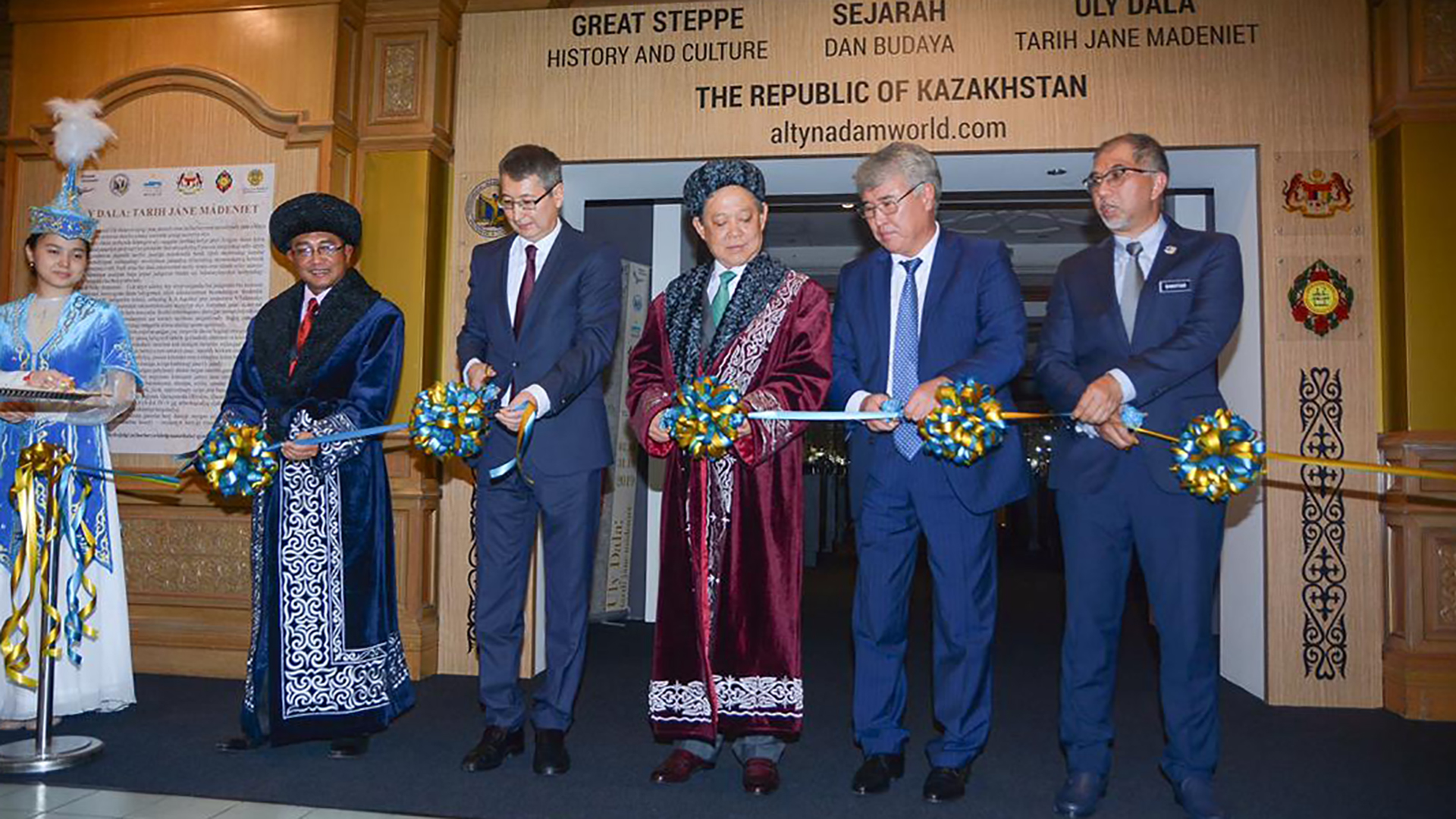 According to Mukhamediuly, the main exhibit is the Golden Warrior, which received such a talking designation due to the fact that his costume was almost entirely made of precious metal.

“Every detail of the clothes of the Golden Warrior has deep philosophical significance. Especially, the headdress symbols, sky-high singing the spirit of Tengrianism. You can also see some artifacts of that era. I want to draw your attention to the fact that the images used once in the design of the Golden Man’s costume are involved in the state symbols of Independence of Kazakhstan. We are pleased to share with you the joy of contemplation and admiration for the masterpieces of the Great Steppe! ” the museum director said. 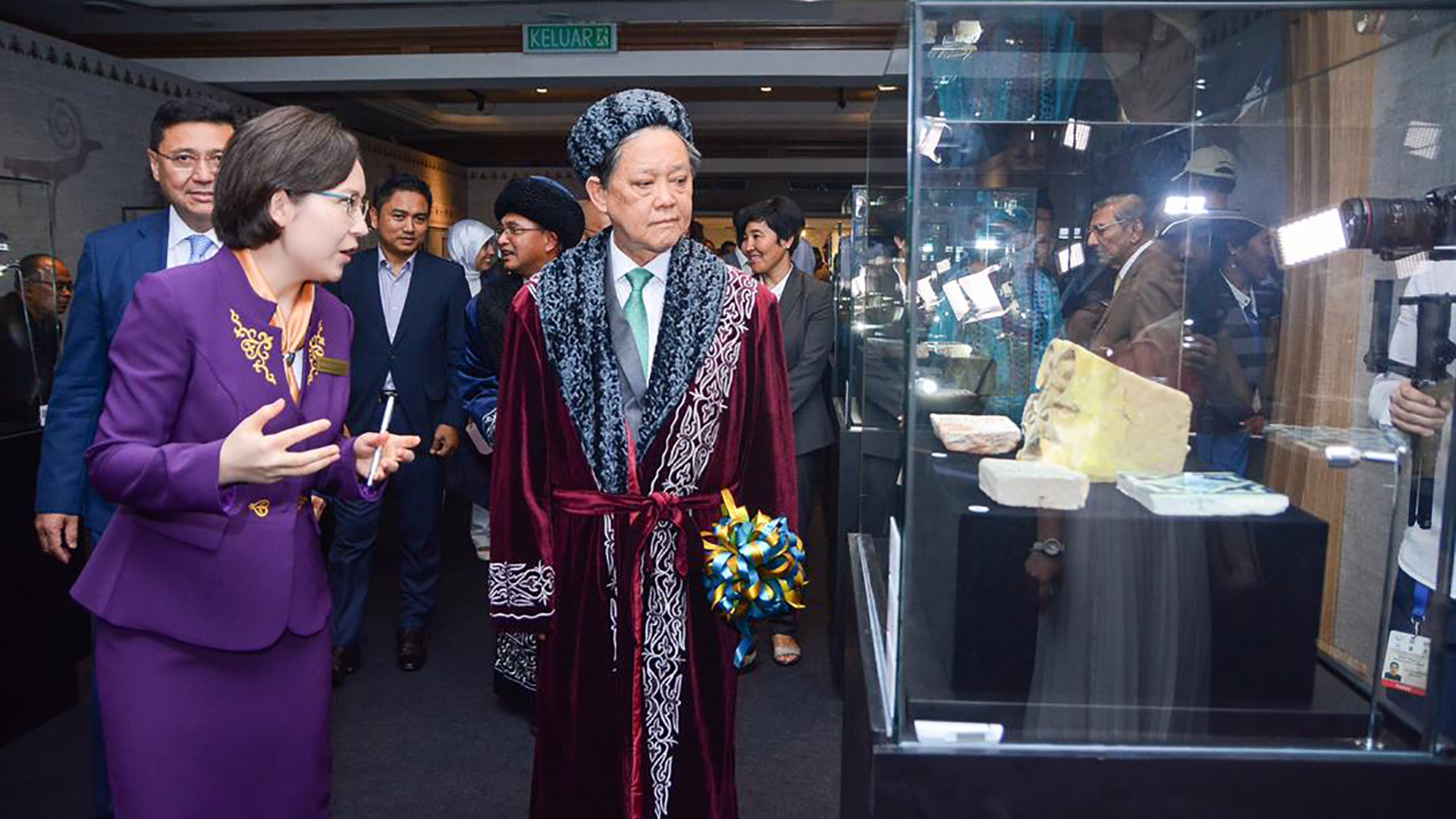 At the exhibition, you can see the reconstruction of the Golden Man in clothes embroidered with gold plaques, in a special conical headdress decorated with gold plates in the form of gold arrows, snow leopards, argali, horses and birds, and a collection of archaeological finds from the early Iron Age (V - IV centuries BC) that accompanied the burial of this noble Saka young warrior (according to archaeologists his age is 17-18 years).

In total, the exhibition features 346 items from the collections of the National Museum of the Republic of Kazakhstan. Presented at the exhibition are the masterpieces of ancient and medieval art of Kazakhstan, this is only a small part of the creations of nameless masters of the past, reflecting the original heritage of the steppe culture of Eurasia.

It should be noted that in the late 1960s and early 1970s there was an archaeological sensation in the vicinity of Almaty: in the Issyk barrow, which was studied by the outstanding archaeologist Kemal Akishev, the remains of the Saka king, the Golden Warrior, which later became the symbol of Kazakhstan, were discovered. The priceless find was dubbed “Kazakh Tutankhamun” and recognized as the discovery of the century. Gold jewelry from the crown of the ancient ruler of the steppes — winged horse-tulpars — became part of the national coat of arms of the Republic of Kazakhstan, and the sculpture of the Golden Warrior was installed on Independence Square in Almaty.

Over four thousand gold items were found in the mound: details that decorated clothes, as well as jewelry and household utensils. The topography of objects in the burial allowed researchers, as a result of hard work, to recreate the appearance of an ancient warrior, which is presented at the exhibition. A special place in the exposition is occupied by a silver bowl found among the finds of the Issyk burial mound with an inscription made in runic writing — one of the oldest written monuments found in this territory. 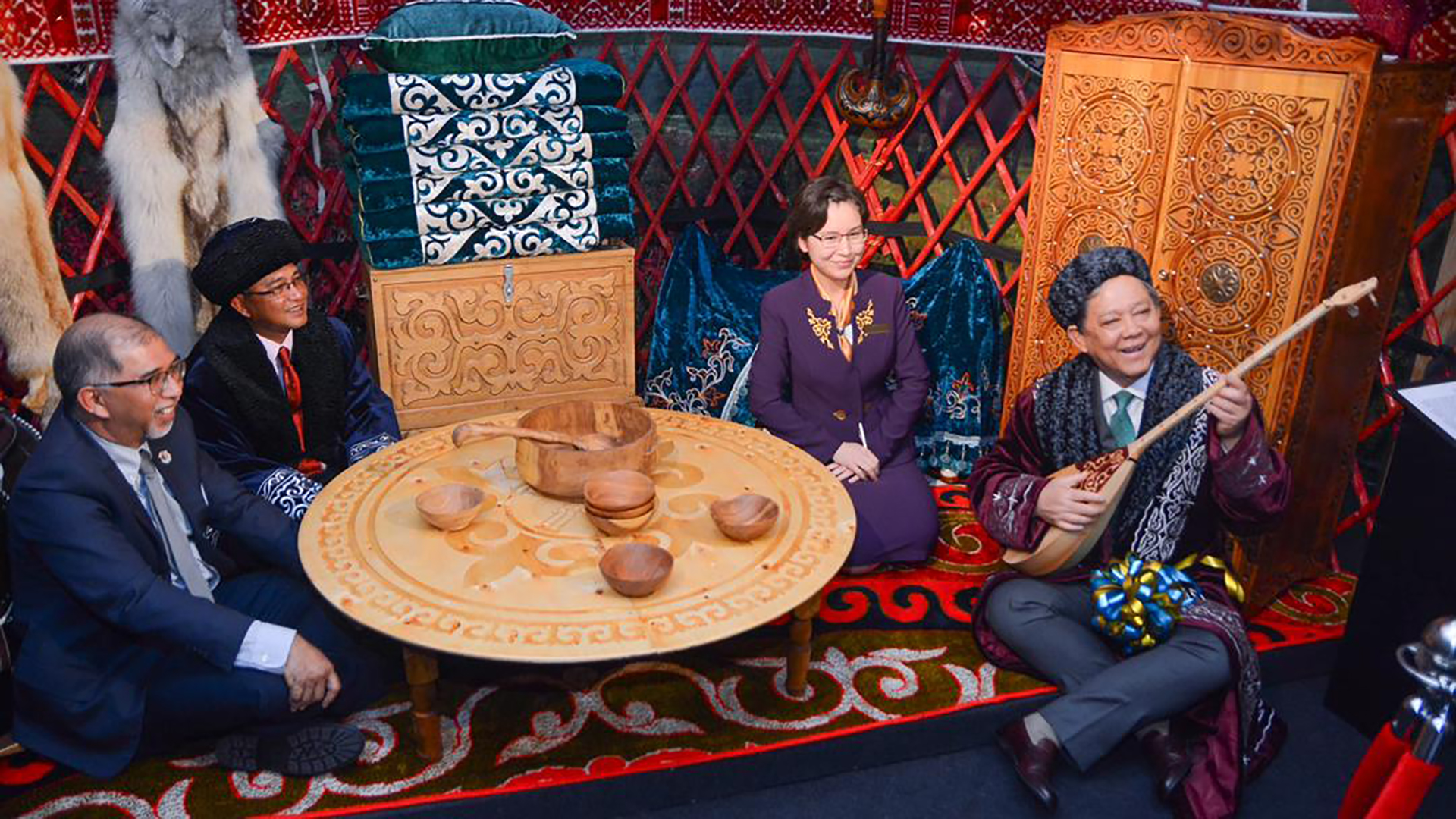 The most important feature of the ancient art of the steppe is the dominance of zoomorphic images — the so-called "animal style," the distinguishing features of which are stylized images of totem animals, animal fighting scenes endowed with magical functions.

The drama of the plots symbolizes the opposition of the elements and the rebirth to life, the confrontation of good and evil, the eternal movement and the eternal struggle of opposites. A striking example of "animal style" is a plaque dating from the V-IV centuries. BC, made of gold using the stamping and corrugation technique in the form of two mirrored leopards.

With the adoption of Christianity and Islam, the animal style gradually lost its original meaning, dating back to pagan beliefs and ideas.

However, decorative images of animals, devoid of their original magical meaning, continued to exist in medieval art: in jewelry, book miniatures, wood carvings, stones and bones, in architecture — but in a more generalized form, acquiring the forms of a stylized ornament, decor elements . These trends are clearly expressed in the finds from the Sairam treasure, which are represented in the exhibition by jewelry items dating from the 15th century. Also at the exhibition will be presented unique archaeological finds from the Saki barrows Taksay (West Kazakhstan region), Taldy-2 (Karaganda region) and Berel (East Kazakhstan region).

Saka (translated from Persian, means "powerful men") — the distant ancestors of the Kazakhs. In the writings of Greek authors they are called Asian Scythians (the word saka goes back to Scythian — “deer”), in other ancient sources they were figuratively described as “tours with fast horses”. Among the three large groups of these tribes were mentioned Saki-tigrahauda (“hats”), who lived in the territory where the Issyk barrow was discovered with the burial of the Golden Warrior.