Non-working regime in Nur-Sultan and Almaty extended for a week, quarantine introduced in Shymkent 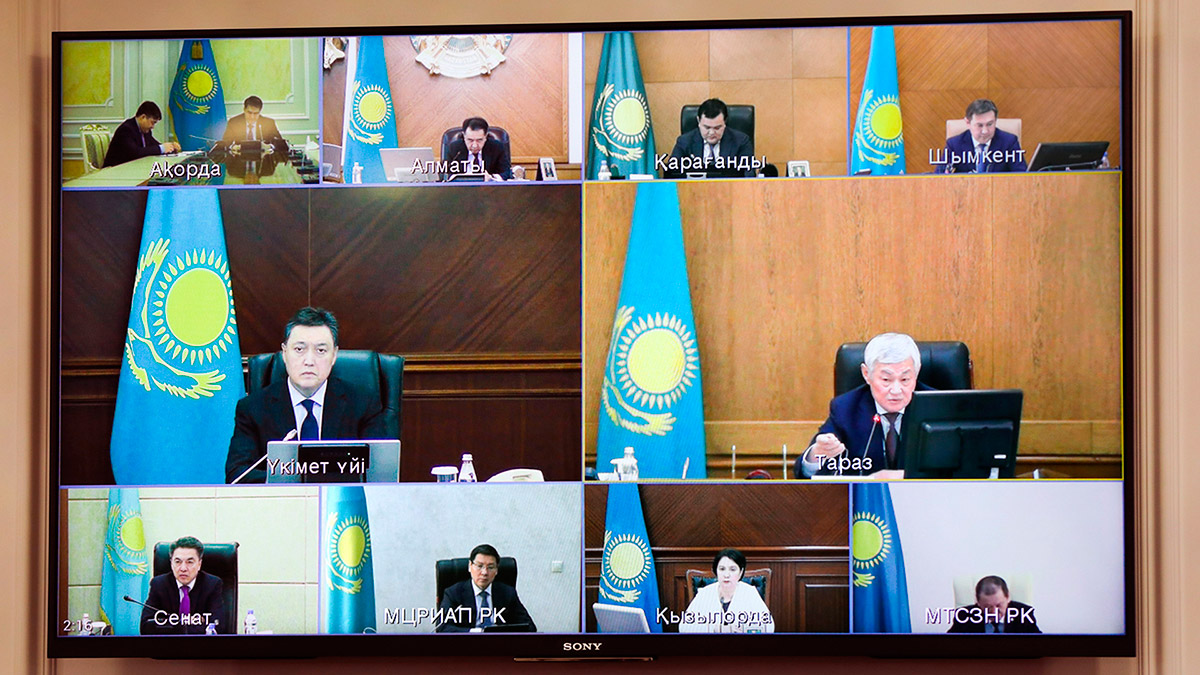 Prime Minister Askar Mamin chaired a selector meeting of the State Commission on Ensuring the State of Emergency under the President of the Republic of Kazakhstan.

Minister of Healthcare Yelzhan Birtanov reported on the sanitary-epidemiological situation in the country, akims of Nur-Sultan Altai Kulginov, Almaty Bakytzhan Sagintayev and Shymkent Murat Aitenov, as well as Kyzylorda region – Gulshara Abdykalikova reported on the state of affairs in the regions, Minister of Labor and Social Protection of the Population Birzhan Nurymbetov, akims of Zhambyl and Karaganda Regions Berdibek Saparbayev and Zhenis Kassymbek spoke on practical measures in the implementation of the Employment Roadmap, Minister of Defense Nurlan Yermekbayev reported on special deployment of territorial troops.

The State Commission in order to limit the spread of coronavirus infection decided to extend until April 13, 2020, the non-working regime operating in Nur-Sultan and Almaty for all enterprises and organizations, with the exception of those whose activities are related to the livelihoods of two megacities and the health of the population.

The State Commission agreed with the proposal of the Akim of Shymkent on the introduction of quarantine in the city from 9 p.m. April 4, 2020.

In order to prevent nosocomial outbreaks of infections, the Head of Government instructed akims to ensure strict compliance with sanitary requirements in infectious, pharmacist and quarantine facilities.

On the proposal of the Ministry of Healthcare, a decision was made to build three infectious diseases hospitals from quickly erected structures in Nur-Sultan, Almaty and Shymkent.

The Ministry of Industry together with interested state bodies for the period of emergency was instructed to take the necessary measures to ensure control over the production of personal protective equipment, the Ministry of Healthcare and akimats – to develop a separate algorithm for safety and work at life support facilities.

Particular attention was paid during the meeting to the quality implementation of the Employment Roadmap, including the early start of specific projects in Nur-Sultan, Almaty, Shymkent and other regions. At the same time, the Head of Government instructed the akims to ensure the creation of at least 240 thousand jobs, the use of at least 90% of the goods and services of domestic manufacturers, the creation of mobile recruitment points for employment within the framework of the Roadmap, and the attraction of unemployed people to projects through the Electronic Labor Exchange.

The prime minister emphasized the need to ensure the work of opening accounts for citizens to receive payments (42,500 tenge) for loss of income during the state of emergency.

The State Commission considered the issue of distance learning for schoolchildren in the fourth quarter.

“The ministries of education and digital development should monitor and provide methodological support for the entire distance learning process,” said Mamin.

The issues of ensuring food security, conscription of military men to special gatherings for staffing the territorial forces of the Armed Forces, as well as proposals for inclusion in the list of activities in the most affected by the state of emergency sectors of the economy, which from April 1 to Oct. 1, 2020, will be exempt from taxes and other obligatory payments from the payroll fund, were considered.