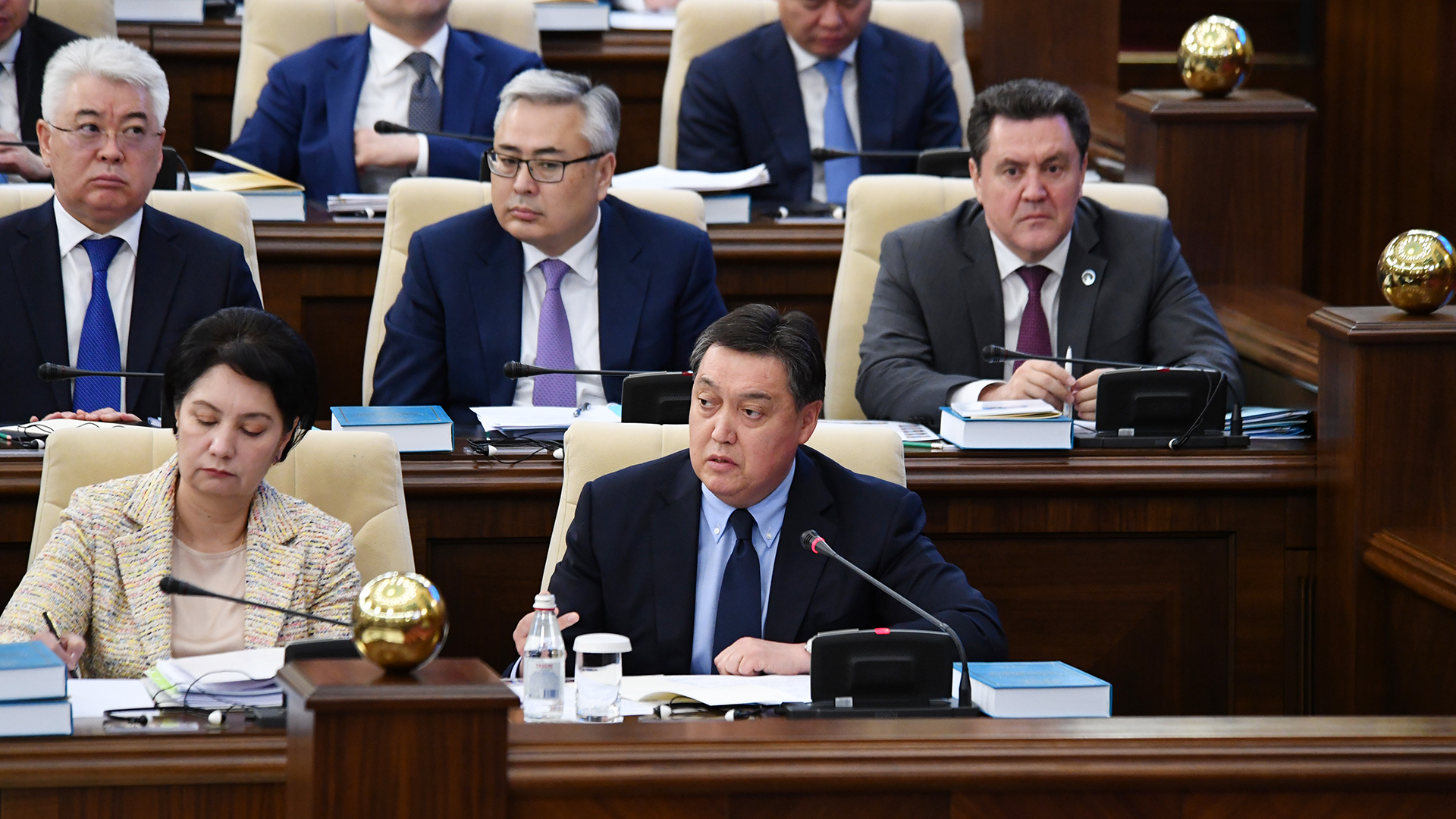 Prime Minister of Kazakhstan Askar Mamin took part in a joint meeting of the Chambers of Parliament, during which the Government approved the report on the execution of the republican budget for 2018.

Reporting on the execution of the republican budget for 2018, First Deputy Prime Minister of – Minister of Finance Alikhan Smailov noted that the fiscal policy of 2018 was aimed at strengthening the stability of public finances and further developing the economy. The priority areas for spending budget funds were the support of the real sector of the economy, the preservation of jobs and the development of the social sphere. The growth of the economy in 2018 was 4.1%. The budget received 8.8 trillion tenge of income. A high percentage of funding execution was ensured — 99.8%.

“The social orientation of the budget has been preserved. Almost half of all expenses was used for this purpose, that is, 4.3 trillion tenge. Social assistance and social security took 2.6 trillion tenge. Pensions and benefits were paid from the budget to 3 million 530 thousand people,” Smailov said.

During the meeting, the deputies of the Senate of the Parliament of Kazakhstan Sergey Plotnikov, the Majilis of the Parliament — Kozhakhan Zhabagiev raised questions on the implementation of state programs, the execution of the republican budget, and the development of the domestic machine building industry.

The Prime Minister Askar Mamin noted that in order to further improve the efficiency of budget planning and ensure full implementation, a number of reforms are being prepared, which will be introduced before the end of 2019.

Regarding the development of the automotive industry, Mamin announced that following the results of five months 2019, auto industry grew by 46%. Today, the auto industry in Kazakhstan is becoming one of the drivers of the economy. In 2018, about 30 thousand cars were produced, in 2019 it is planned to produce more than 50 thousand cars. Work is underway to bring the localization level to 50% by 2021. In order to increase the availability of car loans, about 3 thousand cars were financed in 2018 as part of car loans. This year, it is planned to increase the volume of loans to 15 thousand cars in cooperation with the National Bank. The volume of loans for the purchase of domestic cars will be increased fivefold.

“This gives an appropriate incentive for the development of production, and citizens of Kazakhstan will receive a preferential financial instrument for the purchase of cars. The dynamics here are good, we will increase it,” the prime minister replied.

In conclusion, Mamin thanked the deputies for effective joint work, open and constructive proposals while hearing the report.

“On all the questions, comments, suggestions raised by the deputies, concrete work will be organized. The necessary measures will be taken promptly,” said Mamin.

In addition, at a joint meeting of the Chambers of the Parliament of the Republic of Kazakhstan, the report of the Accounts Committee on Control over the Execution of the Republican Budget for 2018 was announced.

Chair of the Accounts Committee Natalya Godunova noted that the execution of the republican budget in 2018 was carried out amidst the significant changes in the budget process conducted by the Government, taking into account the last year’s recommendations of the Parliament and the Accounts Committee.

“Of the recommendations given by the Accounts Committee to the Government and state bodies, following the previous review, 72% are implemented and are at the implementation stage, which contributed to the improvement in budget execution. The budget adjustments were 2 times less, the inefficient use of budget funds decreased by almost 4 times, the positive dynamics was fixed,” Godunova said.