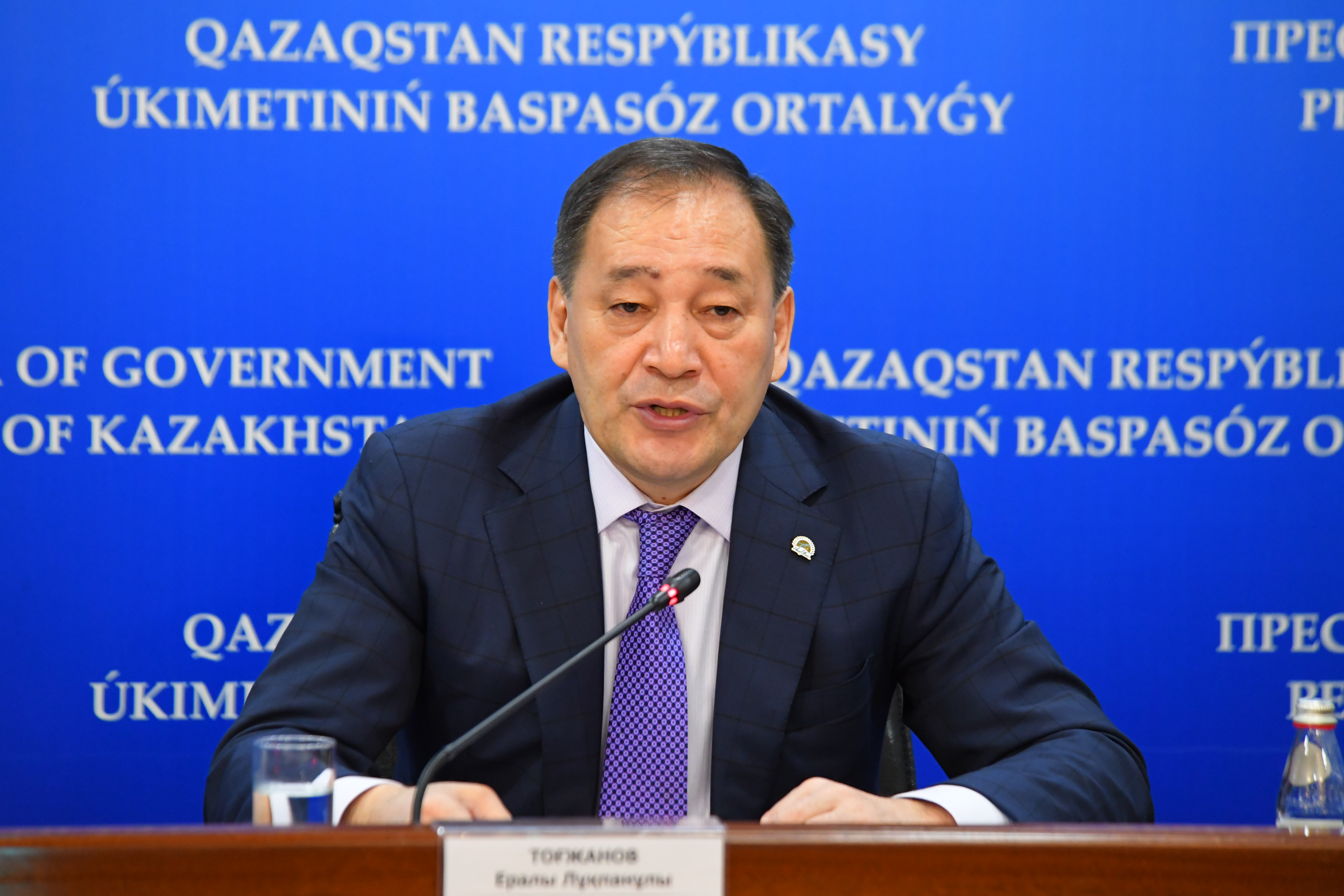 During the online briefing in the Government, Deputy Prime Minister Yeraly Tugzhanov spoke about the measures taken to non-proliferate COVID-19 in Kazakhstan at the current time.

By the decision of the Head of State Kassym-Jomart Tokayev, a state of emergency was introduced for a month. The State Commission was created under the chairmanship of the Prime Minister of the Republic of Kazakhstan, three meetings were held.

According to Tugzhanov, the Government is working around the clock today, specific decisions are made within a maximum of one to two days. All of them are aimed at protecting the life and health of the population.

When leaving two cities, mobile points are set up with medical personnel on duty, a mandatory survey of all those leaving will be introduced.

These measures are taken to monitor the condition of people and prevent the spread of the virus to other regions.

“Second, non-food shopping and entertainment centers, cultural, food and service establishments are temporarily closed. Restaurants and cafes will be able to continue work with home delivery. At the same time, food shops and pharmacies will operate as before,” said Tugzhanov.

By order of the Head of State, up to 70% of employees of state organizations switched to remote work.

It is recommended that organizations of Nur-Sultan, Almaty, regardless of their form of ownership, transfer work to a remote form of work.

“Those who work remotely are requested to not leave their homes without the need. I emphasize that these restrictive measures apply only to Nur-Sultan, Almaty,” he said.

Third, sanitation, disinfection of stops, public transport, streets and other socially significant facilities will be strengthened in all regions.

Fourth, a decision was made from March 16 to April 6 to let schoolchildren go on vacation, all colleges and universities were transferred to distance learning.

“All pre-school organizations of Nur-Sultan and Almaty are temporarily closed for the period of quarantine, and in other regions operate normally. Today 28% of children attend kindergartens in the country,” said Tugzhanov.

The deputy prime minister noted that there are enough food stocks and medicines in the country.

“Fifth, I want to assure you that an uninterrupted supply of products and essential goods will be carried out. The government, regional akimats will allocate more than 32 billion tenge. to ensure food security and replenish Stabilization funds. I would like to appeal to business entities that we will not allow unreasonable price increases, especially for household products. The relevant state authorities will carry out strict monitoring of price changes, and when revealing the facts of speculation, the toughest sanctions will be applied,” said the deputy prime minister.

Sixth, in a state of emergency, it is important to prevent a violation of law and order.

Therefore, the internal affairs authorities will intensify control over the protection of public order and ensuring the safety of citizens.

Seventh, in order to support entrepreneurship, tax incentives have been developed for certain categories of SMEs (shopping and entertainment centers, cinemas, exhibitions): temporary exemption from property tax, suspension of interest on tax debt.

“It is also proposed by the end of the year to exempt 10% individual income tax for entrepreneurs working in a generally established manner (about 70 thousand entrepreneurs). All these measures will help support businesses that have deteriorated financial conditions,” said Tugzhanov.

Eighth, in accordance with the appeal to the people of Elbasy, the Government will pay special attention to the observance of the labor rights of workers. In the current situation, an extremely important task is not only to ensure the preservation of current jobs, but also to create 431 thousand new jobs.

In this regard, the Government has developed an Employment Roadmap for the implementation of which 300 billion tenge will be provided.

The program will provide employment, as well as solve the most pressing infrastructure issues in the regions: reconstruction and repair of social, housing and communal facilities.

“I appeal to the management of enterprises, the business community to take all measures to minimize social consequences, ensuring compliance with the labor rights of workers and preventing their reduction,” he said.

Ninth, heated discussion among the population raises the issue of the shortage of medical masks.

Tugzhanov assured that the Government is daily working on increasing production volumes by domestic producers.

“If today 360 thousand masks are produced daily in the country, of which 171 thousand are reusable, then in the near future the task is to increase volumes to 1 million,” the deputy prime minister said.

Tenth, it is necessary to ensure the return of over 5 thousand Kazakhstani tourists who are abroad.

“In the context of a massive reduction in flights around the world, unprecedented measures are being taken to take them on charter flights, I emphasize, not at the expense of the state. Only until March 23, 2020, 18 flights are planned to return more than 4 thousand Kazakhstan tourists (the rest will be taken out later),” said Tugzhanov.

It is worth noting that, despite certain difficulties, the state will fulfill all obligations on social security of Kazakhstanis.

“We urge you to understand the measures taken by the state with understanding and support. I ask you to show understanding and assist the work of law enforcement agencies, doctors and sanitary-epidemiological services. All this is done for your good, the well-being of your loved ones and the maintenance of social stability in our country. Elbasy, the Head of State and the Government are making every effort to ensure the livelihoods of the population of Kazakhstan. However, only by universal efforts can we overcome all difficulties! Our success and the health of the nation depends on each of us, and today our cohesion is needed more than ever,” concluded Tugzhanov.