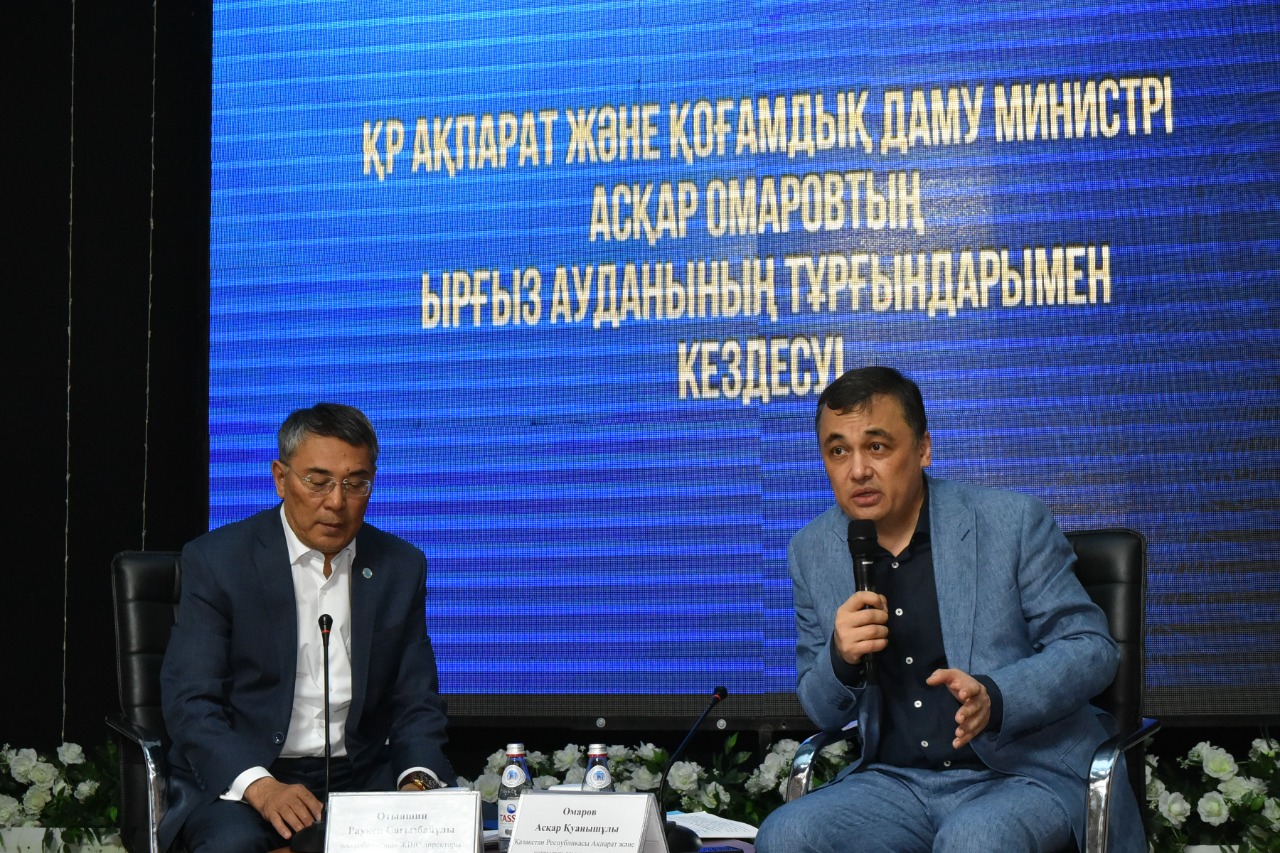 Minister of Information and Social Development of the Republic of Kazakhstan Askar Umarov met with residents and media representatives of the Irgiz district of the Aktobe region. During the meeting, the minister spoke about the implemented projects, ongoing work and the main tasks of the department. Residents, in turn, voiced problematic issues in the areas supervised by the ministry, namely in the field of religion, ideology, media content, volunteering, and youth.

In his report, Umarov noted the need for timely fulfillment of the regional state information order in the regions with maximum attention to the regional media. The minister also dwelled in detail on the development of civil society, in particular: financing NGOs through the implementation of social projects within the framework of the state social order, improving legislation on volunteering, charity, public health protection and grants for NGOs, further developing the volunteer movement.

According to the head of the department, today a lot of work is being done to develop civil society institutions.

About 17 thousand NGOs operate in the republic, including 612 NGOs in the Aktobe region. The state is building a comprehensive interaction with NGOs, incl. with rural, through the implementation of joint projects.

Within the framework of the state social order in this year, over 18 billion tenge is provided for the implementation of social projects.

In the Irgiz district, 4 projects are planned in the amount of 7.4 million tenge in 2022. The projects are aimed at the patriotic education of young people, the fight against religious extremism and terrorism, and free transportation of the disabled.

In turn, one of the problems in the implementation of state social order projects in the region can be identified as insufficient work of the akimat in terms of public discussion of topics and results of project evaluation with NGOs and citizens, which leads to poor planning of state social order topics, duplication and one-time events.

“Taking into account the growth of the budget, the akimat needs to pay attention to the observance of these procedures and the allocation of funds to projects that are really important for the population,” Umarov said.

At the same time, the ministry is working on improving the legislative framework in the field of civil society.

In particular, a draft law has been prepared on volunteering, charity, and grants for NGOs, which will improve the mechanisms for grant funding for NGOs. In particular, it is proposed to introduce a differentiated approach to providing grants, which will ensure coverage among rural NGOs.

Work is underway to update the composition of public councils, taking into account the increase in the proportion of citizens in them. Thus, according to the results of the work carried out in the current year, the share of representatives of the civil sector increased by 23.5% (from 62.5% to 86%). For example, in the Aktobe region, this figure is 170 people or 84.2% of the share of civil society, while in 2021 this figure was 76.8%. In the Irgiz region, the figure is 80%, which is a good indicator. At the same time, the minister drew the attention of the district akimat to the absence of representatives of NGOs and the media in the public council.

“I would also like to note that in the composition of the public councils of Kobdin (43%), Temir (67%), Khromtau (50%), Kargshaly (43%) districts, the representation of government agencies is not only not minimized, but also allowed to exceed the limit of their participation . In this regard, the regional akimat needs to pay special attention to the qualitative formation of the composition of public councils,” the head of the department said.

One of the areas of work of the ministry is the development of the volunteer movement.

“Volunteering has always been very close to the mentality of our people, especially in rural areas. In the Aktobe region, there are 139 volunteer groups consisting of about 4.7 thousand volunteers, who organized about 1.1 thousand good deeds (promotions, events), opened a social store, and provided assistance to more than 60 low-income families. I would like to note the activity of the regional volunteer organizations Zhiger, Yrgyz Zhastary, Meyirim, which provide assistance to the population, including during the pandemic, the January events, etc.," the minister said.

n addition, following the results of 2021, 2 volunteer organizations (“Aktobe, Dyshi!”, “ZhubanovZhyluy. EcoArsu”) of the region became the best in the nomination “For Contribution to Protection and Preservation of the Environment” of the International Volunteer of the Year Award.

To support volunteer activities, the Ministry, together with the ALE "National Volunteer Network", created front offices of volunteers "BIRGEMIZ" in each region, and appropriate grant funding is provided (regional funding for volunteering grants of 7 million tenge).

As for the development of the media sphere, there are 105 media outlets in the region today (periodicals - 81, TV channels and radio - 8, news agencies and online publications - 16), one of the areas of work of which is the implementation of the regional state information order.

Currently, its implementation is carried out according to a new mechanism, without the use of public procurement standards, which should have a positive impact on the quality of the content.

“Akimat of the region needs to actively involve the maximum number of local media in the implementation of the GIZ. It is also necessary to work out the possibility of increasing funding for regional media and ensure the timely holding of competitions. It is necessary to strengthen the work of the Regional Commission in these areas,” Umarov said.

Umarov also spoke about the measures taken by the state to support youth. In the Irgiz region, the number of young people is about 3.9 thousand people, and this is almost a quarter of the population of the region (24.6% of the population). There are 3.7 million (20.4% of the population) youth in the country, of which more than 40% are rural youth.

In general, the level of youth unemployment in the Aktobe region from 2020 to 2022 decreased from 3 to 2.4%, which is lower than the national average (in the republic - 3.9%). This is a positive trend. The number of NEET youth also decreased from 8.7% to 7.1%. However, the indicator remains higher than the national average by 0.4% (6.7%), and therefore it is necessary to strengthen the ongoing work with this category of young people.

According to the minister, the state pays special close attention to youth policy.

So, on May 20 this year, in the Senate of the Parliament, hearings were held on topical issues of youth policy with an online broadcast, where topical problems in the field of education, healthcare, employment, spiritual and moral development of youth and others were discussed. Based on the results of the hearings, government agencies were given specific instructions for further work with youth. The full video from these parliamentary hearings is available on Youtube, where anyone can watch it.

In addition, the Government is introducing new mechanisms to support youth. For example, on behalf of the Head of State, in 2022, the period for youth practice was increased from 6 to 12 months and for the First Job project from 12 to 18 months. This is a good opportunity for young guys to get their first work experience and earn extra money.

Since July last year, a single Portal of short-term online training for skills in demand on the labor market (https://skills.enbek.kz) has been launched, which is available to everyone who wants to learn and improve their skills.

In turn, the Ministry has developed a draft law aimed at improving the mechanisms for supporting youth, which is under consideration in the Majilis of the Parliament.

For reference: the concepts of “youth of the NEET category”, “youth social services”, “specialist in working with youth”, “Youth Development Index” will be legislatively fixed, the activities of youth labor groups will be regulated.

“This project is a real opportunity for young people to develop their idea and talk about it personally in front of the President. Among the winners there are also rural children, so I urge local youth not to be shy, to actively participate in competitions, and the akimat to provide them with all possible assistance. I also want to draw the attention of the akimat of the region and the district to the problems in the functioning of local youth resource centers. This is a weak equipment: the lack of its own building, official transport, low wages for employees of the centers. In this regard, I ask the akimat to pay attention to these issues and take possible measures to resolve them,” summed up Umarov.

In addition to meetings with the public, Umarov visited the Irgiz regional mosque, the Irgiz newspaper and other organizations.

After talking with representatives of the younger generation at the youth resource center in Aktobe, the minister spoke about the grants allocated by the state and the implementation of youth programs.

Umarov noted that the Government is introducing new mechanisms to support youth, for example, on behalf of the Head of State, the period of youth practice has been extended in 2022, which is a good opportunity to get first work experience and first earnings.

The minister also visited the Alginsky district, where he met with representatives of local youth in the new coworking center, which has all the conditions for gaining knowledge.

The head of the department noted that he would take into account the voiced problematic issues.