Government’s anti-crisis measures: How much money to be allocated to support citizens and economy in face of emergency 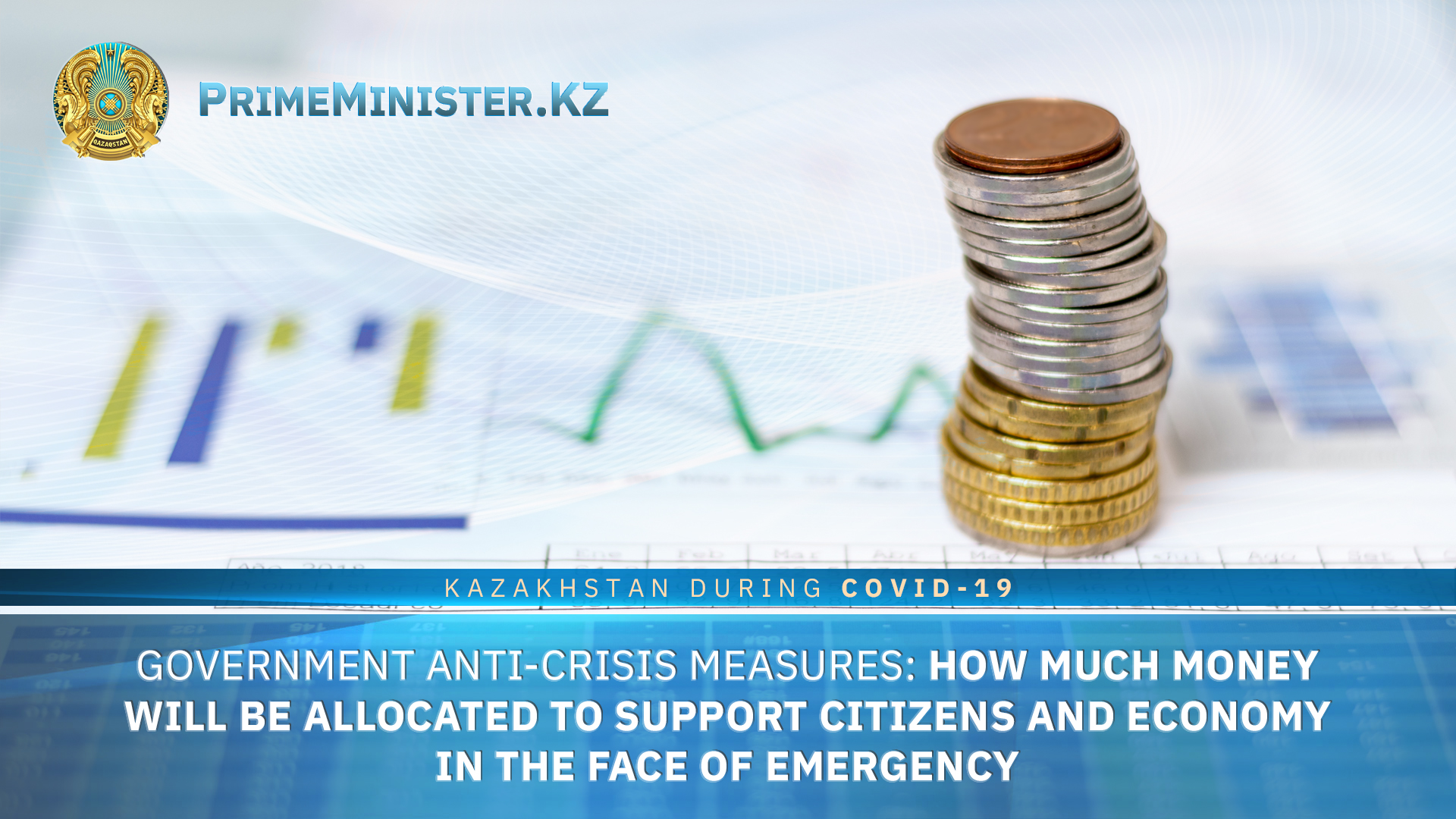 During the state of emergency in the country, the President of Kazakhstan Kassym-Jomart Tokayev repeatedly addressed the people with specific instructions aimed at supporting the economy, small and medium-sized businesses, the entire population of the state in these difficult current conditions. Today it is important to make efforts to build a prosperous system of social and financial regulation.

In support of citizens and the economy in emergency situations, additional expenses are provided for in three areas.

First. Implementation of the Employment Roadmap, within the framework of which infrastructure projects will be implemented and 254.3 thousand jobs created.

Second. Indexation of social benefits and coverage of costs associated with changes in foreign exchange rates.

The government plans to allocate 315.4 billion tenge for these purposes.

Third. To support citizens and the economy, as well as to implement certain instructions of the Head of State, it is proposed to allocate 293.4 billion tenge.

At the expence of these funds, it is planned to implement a number of measures and projects aimed at stimulating production, while improving the quality of life and increasing income and demand.

At the same time, to cover losses on budget revenues and implement the above measures, the republican budget expenditures were optimized by 532.8 billion tenge. The budget deficit increased by 840.7 billion tenge.

As a result, the parameters of the republican budget are as follows:

After the decision has been made, in order to ensure a quality and timely use of funds, administrators of budget programs need to conduct public procurement procedures and other relevant activities in time.

Given the current spread of coronavirus infection, the Head of State has ordered to make additional payments to medical and other employees involved in quarantine activities.

The total package of anti-crisis measures, excluding tax preferences and support at the local level, will be an additional 5.9 trillion tenge, of which:

First. 1.2 trillion tenge is provided for ensuring economic stability and the state of emergency.

To support employment, the Employment Roadmap program was adopted, within which 254.3 thousand jobs will be created in the post infection period. Unprecedented amounts (up to 1 trillion tenge) are allocated for its implementation.

An additional 84.5 billion tenge is planned to be allocated for the implementation of the Business Roadmap.

In addition, it is envisaged to strengthen measures to support entrepreneurship through subsidizing and guaranteeing loans to entrepreneurs. This will create about 16 thousand jobs and tax revenues of more than 250 billion tenge.

Also, 30.8 billion tenge are provided for the provision of food and household sets for certain categories of citizens with a cost of 5,567 tenge. This measure will cover more than 2 million people.

As part of the clarification, additional costs in the amount of 50 billion tenge are envisaged for the implementation of the Enbek program. As a result, the development of mass entrepreneurship will continue, the creation of an effective model of labor mediation and skills, including support for socially vulnerable groups of the population.

Second. For events related to changes in macroeconomic indicators, 315.4 billion tenge is allocated.

Third. It is proposed to allocate 293.4 billion tenge to support citizens and the economy, including the implementation of individual instructions of the Head of State.

Within the framework of these funds, it is planned to implement a number of measures and projects aimed at stimulating production, while improving the quality of life and increasing income and demand.

These measures will be implemented through:

At the same time, losses on republican budget revenues are estimated at 1.7 trillion tenge. 39.1 billion tenge were allocated to finance measures to prevent the occurrence and spread of coronavirus infection, as well as the purchase of socially significant food products.

Of these, a total of 23,468.5 million tenge was allocated for ongoing anti-epidemiological measures to combat coronavirus infection, of which:

These funds were spent on targeted transfers for the purchase of personal protective equipment, disinfectants, medicines and medical devices for 11,563.9 million tenge, of which almost 30% were sent to the cities of Nur-Sultan — 1,412.4 million tenge, Almaty — 1,419.9 million tenge, Shymkent — 605 million tenge.

In addition, on behalf of the Head of State, an additional 125,283.5 million tenge will be provided for anti-epidemiological measures as part of the budget for 2020, of which:

For reference: So, the size of premiums will be determined by risk groups:

3) 14,800 million tenge — for the construction of three quarantine-type medical module complexes in Nur-Sultan, Shymkent and Almaty for a total of 680 beds;

4) 30,815.7 million tenge — for the provision of food and household sets for certain categories of the population (recipients of the targeted social assistance, including children from 6 to 18 years of age, disabled people of 1-3 groups, disabled children, persons caring for a disabled child, officially registered unemployed) for the period of emergency. About 2 million people will be provided with food and household sets;

5) 8,091.8 million tenge — for the payment of bonuses to employees and medical workers of the internal affairs bodies, military personnel of the National Guard and Armed forces in the amount of 1 official salary (about 66.3 thousand people will be covered);

6) 4,058.4 million tenge — for the provision of communication services and the functioning of interdepartmental information systems;

7) 5,623.1 million tenge — to ensure the smooth operation of the forensic medical examination service;

In addition, under the Program of Concessional Lending to priority sectors of the economy as of April 10, 2020, banks accepted 619 applications totaling 422.2 billion tenge, approved 470 projects worth 292.2 billion tenge, 352 loans worth 153 billion tenge were issued.

The National Bank decided to expand financing of this Program by 400 billion tenge to 1 trillion tenge, which will be aimed at ensuring food security and reducing import dependence.

A concessional lending program has already been developed and launched to support SMEs and individual entrepreneurs affected by the state of emergency. Under the program, banks were allocated conditional deposits for up to 12 months totaling 600 billion tenge. The disbursement of funds, which should be carried out in 3 months, has already begun. Entrepreneurs filed 647 applications, 45 loans worth 17.3 billion tenge were issued.

As part of the anti-crisis measures, the National Bank made changes to provide support for program borrowers by exempting from fines and penalties, deferring payments on principal and remuneration for up to 90 days.

As part of the second package of measures, the National Bank is working in several areas. In accordance with the order of the Head of State dated March 31, 2020, within the framework of the Economy of Simple Things Program, 100 billion tenge will be allocated for spring field work for one year.

The maturity of bonds of program participants will be increased from 7 years to 10 years.

As part of the second package of anti-crisis measures, the National Bank is considering the issue of financing measures to support business activity and employment for 600 billion tenge with a possible expansion to 700 billion tenge through the purchase of infrastructure bonds of JSC Baiterek National Management Holding.

These funds will be allocated for further financing of local executive bodies and will be provided after allocation of 300 billion tenge from the republican budget to transfers to local budgets for the implementation of the Employment Roadmap.

First, the spread of the coronavirus epidemic had a negative impact on the receipt of VAT and import. In particular, the reduction in imports from third countries amounts to $68 million. In connection with the reduction in imports, a decrease in tax revenues from 11.4 thousand taxpayers of 49.1 billion tenge mainly in wholesale and retail trade — 6.5 thousand taxpayers , manufacturing industry — 1.3 thousand, mining industry — 130 taxpayers.

In addition, the spread of coronavirus caused a decrease in the number of vehicles from the PRC by 29.3%, from the EAEU countries by 17.8%.

At the same time, sales turnover of large 1,796 enterprises paying CIT to the republican budget decreased by 3.4% (from 8.9 trillion tenge to 8.6 trillion tenge).

Third, due to a decrease in entrepreneurial activity, the plan for VAT on TVP was not executed for 132 billion tenge.

In the revised republican budget adopted on April 8, the annual revenue plan amounted to 6.4 trillion tenge.

The implementation of the Comprehensive Privatization Plan for 2016–2020 was 93.2% complete. In 2020, it is planned to sell 68 objects. Of these, 37 have been put up for sale. During the reporting period, 6 objects were sold for 3.2 billion tenge. Thirty-one objects are put up for auction. Three objects are aimed at reorganization and liquidation. Twenty-eight objects will be put up for sale before the end of the year.

One of the main tasks facing the Ministry of Finance is, together with the relevant state bodies, timely bringing to the final recipients the financial resources provided for in the amended budget for the social sphere and the support of entrepreneurs. During the year, the agency will ensure the implementation of the revised revenue plan, without reducing their growth rate.