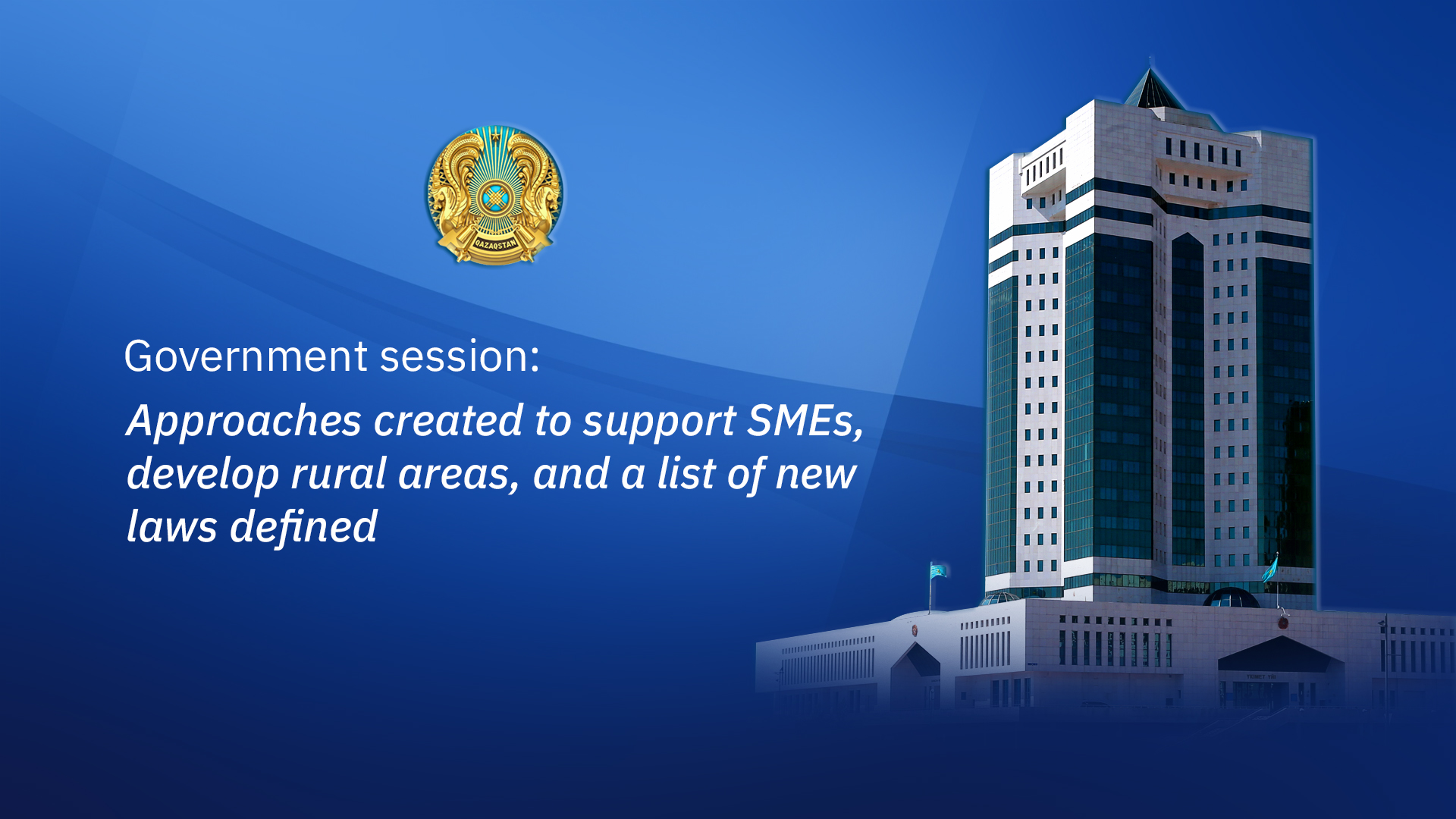 At the Government session held Nov. 6, 2019, the results of the implementation of the Business Road Map 2020 State Program were reviewed and new approaches to supporting business within the framework of the new 2025 Road Map were approved. The agenda also included the issues related to the implementation of the Aul – El Besigi project, as well as the Government's Legislative Work Plan for 2020. On the sidelines of the Government, media representatives received answers to their questions these topics. 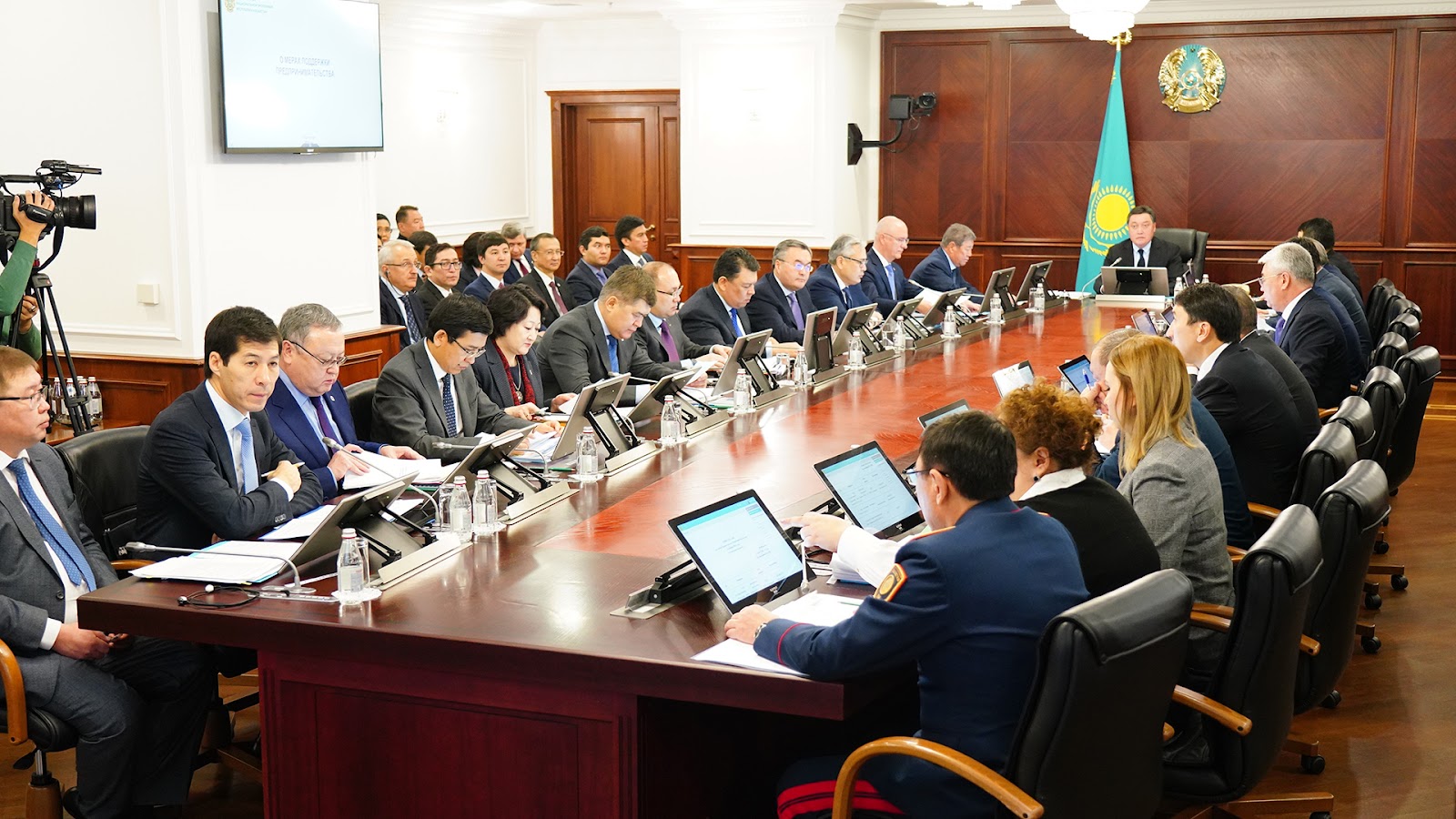 During the consideration of the first question, the Prime Minister Askar Mamin was informed that over the years of the implementation of the Business Road Map 2020, the share of small and medium-sized businesses in the gross domestic product increased to 28.4%, whereas in 2015, this figure was 24.9%. The number of active SMEs increased by 400 thousand, amounting to 1.3 million, and the number of people employed in SMEs increased by 300 thousand and amounted to 3.3 million people. As a result of the implementation of the program, more than 16 thousand SMEs were funded, more than 100 thousand entrepreneurs were trained, products worth 15.5 trillion tenge were produced, taxes worth about 1 trillion tenge were paid.

The head of the government noted that the Business Roadmap 2020 has proved its effectiveness. Since 2010, as a result of its implementation, more than 342 thousand jobs were saved and over 94 thousand new jobs were created.

In turn, the draft State Program "Business Roadmap-2025" provides for identical goals and objectives, but the support tools are improved. So, the amount of loans for working capital increases from 60 to 360 million tenge, 421 billion tenge is allocated to the next stage of the program, which is 1.5 times more than the funding for the previous five years.

After the implementation of the new state program, it is expected:

Thus, over one third of the economy will be accounted for by SMEs already in 2025, and by 2050, SMEs will already account for half of GDP. 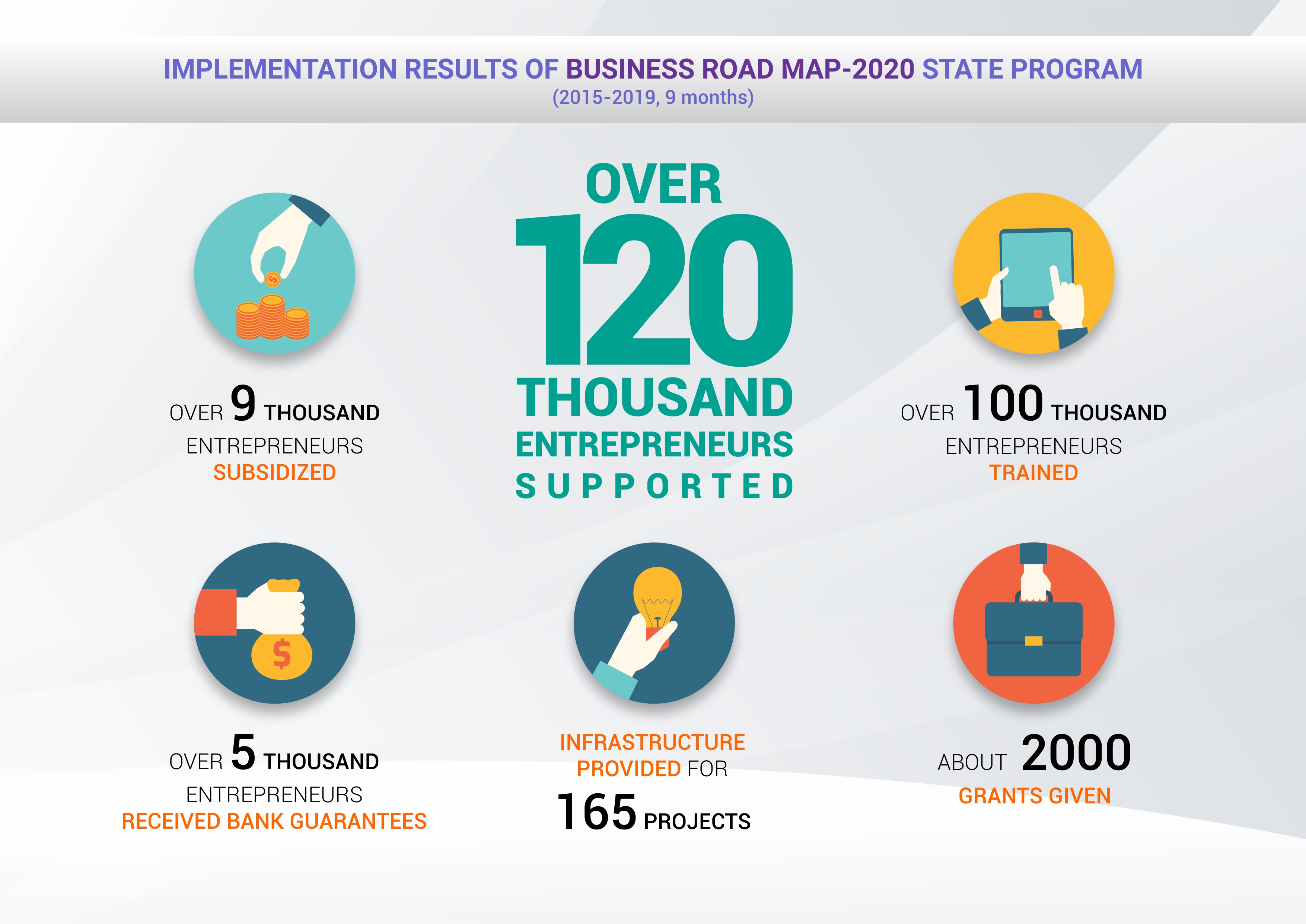 The prime minister instructed the Ministry of National Economy by the end of November 2019 to ensure the adoption of the Business Roadmap 2025, by the end of 2019 to ensure the adoption of the necessary regulatory legal acts, together with Atameken NCE and JSC Damu to conduct information- explanatory work among entrepreneurs about the approaches and opportunities of the new program.

When considering the second question on the implementation of the Aul – El Besigi, the prime minister was informed that currently 7.7 million people live in 6,443 villages, which is 42% of the country's population. In more than half of the villages, road repair is required, a high degree of wear of engineering networks is observed, in most villages repair of educational and health facilities is needed. In this regard, the Ministry of Industry and Infrastructure Development proposes to apply an integrated approach to rural development. For this, rural infrastructure will be modernized as a priority, and rural entrepreneurship will be supported.

At present, 3,477 villages with development potential have been selected, of which 1,150 reference and 2,327 satellite, including 200 border villages. About 6.6 million people or 85% of the rural population live in these villages, the development of which will be a priority. 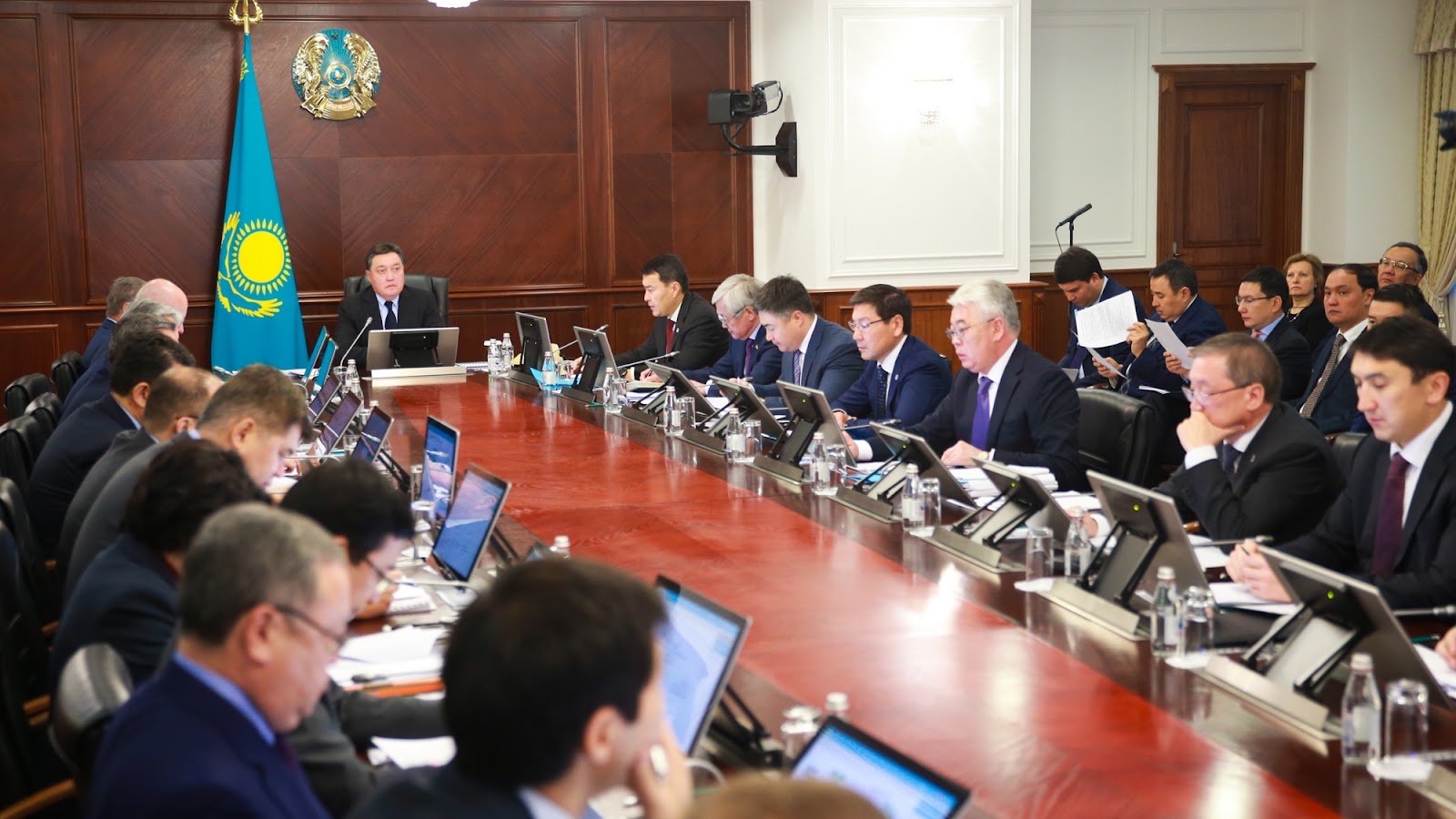 To implement the project, 900 billion tenge is needed, for which it is planned to implement 1,641 projects in 250 villages. Until 2027, the total funding for the Aul – El Besigi project, together with other state programs aimed at rural development, will exceed 2 trillion tenge, and the number of projects will exceed 30 thousand.

As Mamin noted, within the framework of the project, within 7 years it is expected to improve the quality of life of about 7 million villagers through the modernization of village infrastructure, construction and repair of more than 7 thousand km. roads and intra-village streets, life-support engineering networks, 100% provision of high-quality drinking water, reconstruction and construction of educational, health, cultural and sports facilities, as well as the creation of 130 thousand new jobs.

70% of expenses will be financed from the republican budget. Akimats of the regions were instructed to determine the sources of co-financing of the remaining 30%. In addition, it is necessary to attract extrabudgetary funds for the implementation of projects, prepare the necessary documentation and develop Economic Development Plans for each satellite and satellite village.

What Bills to be Developed by Government in 2020?

On the third issue, the head of government was informed that the draft Plan of Government’s Legislative Work for 2020 was developed taking into account the strategic objectives of the First President – Elbasy Nursultan Nazarbayev and instructions of the Head of State Kassym-Jomart Tokayev. The document provides for the development of 16 bills, which are aimed at further development of the sphere of social security, physical education and sports, control of specific goods, housing relations of employees of special state bodies and military personnel, visual information, etc. Of the 16 bills stipulated by the draft Plan in the first half of 2020, it is planned submit to Parliament 4, and in the second half of the year – 12 bills.

In the coming year, it is planned to develop two new draft laws. These are bills “On the Control of Specific Goods” and “On the Plants.”

According to the prime minister, the planned bills are aimed at improving legal relations in areas important for the population.

“The Ministry of Justice, together with sectoral state bodies, needs to pay special attention to the quality of introduced bills,” Mamin said.

The draft Plan of Legislative Work of the Government approved by the Cabinet of Ministers for 2020 will be sent for approval to the Head of State. 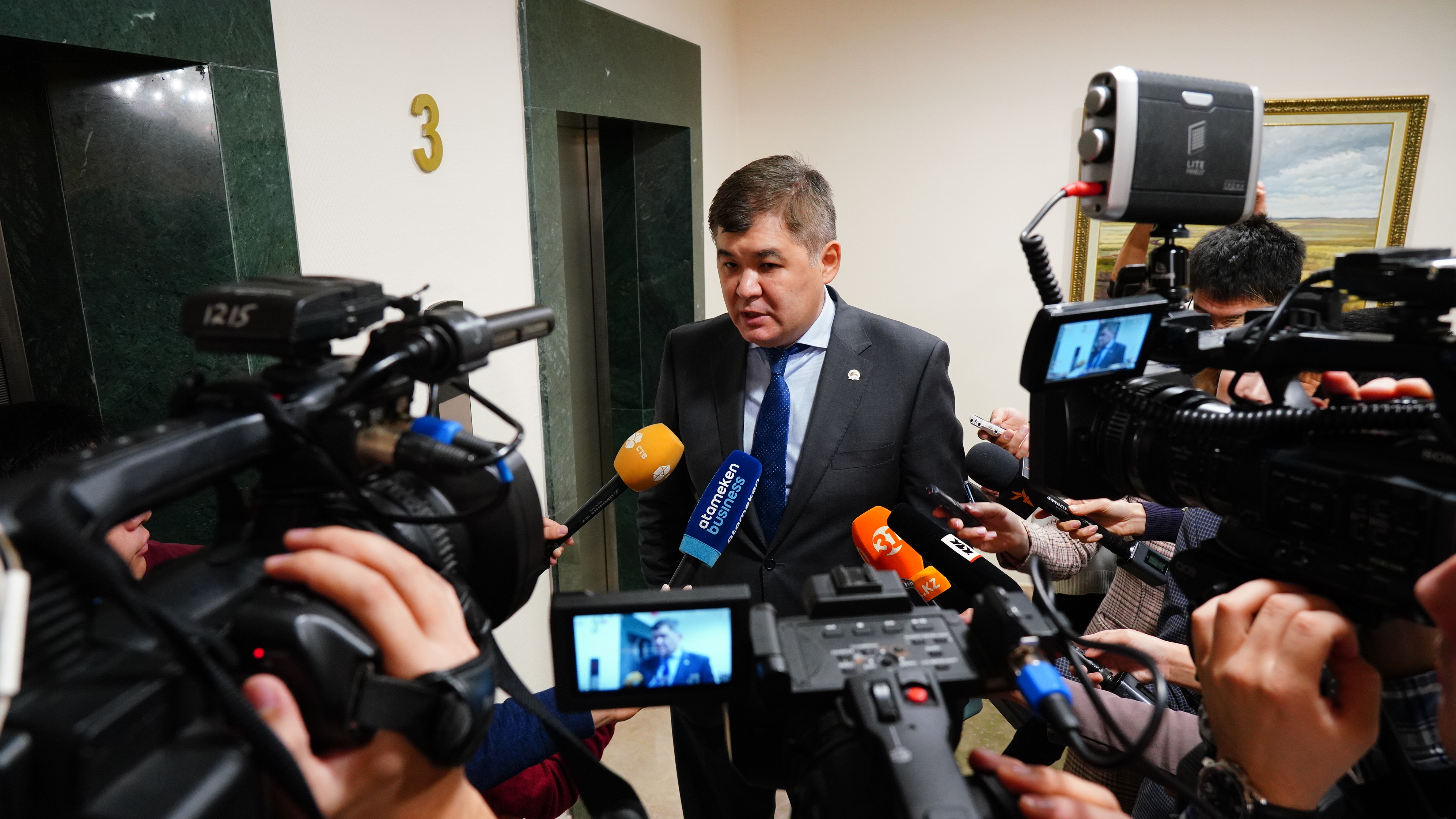 On the sidelines of the Government, the Minister of Healthcare Yelzhan Birtanov spoke about measures being taken to assist children born with a term of less than 37 full weeks.

The minister of healthcare emphasized that the order has already been given; now the methodology for providing special assistance is at the approval stage. In addition, requirements are being developed for medical organizations where appropriate centers will be organized.

The Minister of Industry and Infrastructure Development Beibut Atamkulov spoke about the development of the textile industry, emphasizing the appropriate level of quality of clothing produced in Kazakhstan. According to him, today Kazakhstan produces high-quality clothing that is in no way inferior to foreign competitors.

“We have a lot of good designers and manufacturers of domestic products. I worked in the south of Kazakhstan and was simply amazed at the quality. First of all, I was surprised at the prices that were there. In Shymkent, I purchased a conveyor suit. Several enterprises are sewing here, prices are different. It all depends on the fabric, the lining and the tailor. We have good quality products in Kazakhstan,” Atamkulov said.