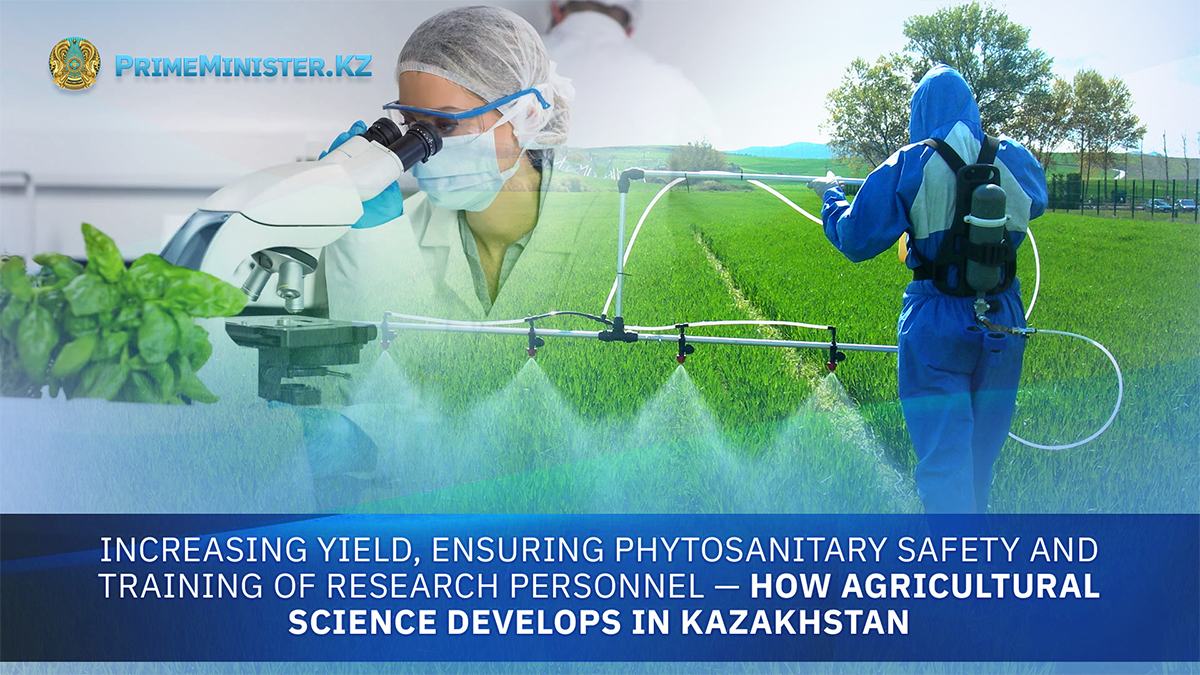 National Agrarian Science and Education Center promotes the innovative development of the agro-industrial complex of Kazakhstan by increasing the practical effect of agricultural science and providing the agricultural industry with highly qualified personnel. Today, the Center is actively introducing innovative approaches to agriculture in order to increase the yield of varieties, contributes to the creation of demonstration sites for testing and introducing new technologies, conducting domestic and foreign research projects for the development of the agro-industrial complex of the Republic of Kazakhstan, and strengthening the further development of the research environment in the agricultural sector.

What are the tasks facing the Center today?

The Center proposes to develop a National Agricultural Extension System, since the villagers do not have the necessary information. They need information about technologies depending on the climatic conditions of a particular year: sowing time and harvest time, seeding depth, seed treatment, plant protection products, animal feeding rations, animal care technologies, etc.

According to Toleutay Rakhimbekov, Chair of the Board of NANOC NJSC, these Knowledge Dissemination Centers should become a link in the integration of science, education and agribusiness.

“Villagers should come here with their problems. Here scientists should receive assignments for research, and universities — requirements for personnel,” he said.

The issue of transferring some experimental stations to trust management to private business is also being discussed. Since 2002, about 30 agricultural enterprises have been transferred to private ownership, but practically not a single privatized enterprise is now engaged in science.

On the other hand, it is necessary to consider the possibility of attracting advanced private agricultural formations as experimental stations. They would participate in research, organize internships for undergraduates and doctoral students, disseminating knowledge.

In 2018, a good program for the training of scientific personnel in leading foreign scientific centers and universities was proposed — the so-called "300 Spartans" program.

In 2019, the volume of funding for agricultural science reached 17.5 billion tenge, or 0.4% of gross production. State Program of the Agro-Industrial Complex envisages increasing in 2021 to 25 billion tenge or up to 0.5%, and by 2030 to 1% of the gross output of the industry.

But there are serious disproportions in the financing of science: more than 90% of all funds are allocated for research, less than 10% for experimental work, but 0% for transfer and commercialization. In world practice, these three blocks account for approximately the same amount of funding — 30-35% each.

A high degree of wear and tear of equipment leads to excessive costs for fuel and lubricants and spare parts. As a result, Kazakhstan loses millions of tons of grain. In order to stimulate the work of scientists, the Center has begun work on the commercialization of the results of research on a royalty basis. The potential amount of royalties is about 10 billion tenge per year, of which 3 billion tenge would be paid to scientists, and 7 billion tenge — for new scientific developments. The royalty system is not only about raising the income of scientists. It also encourages them to control the quality of the seed, which will affect the quality and volume of the country's entire crop.

What mechanisms applied to the transformation of agricultural science?

The center today began the transformation of agricultural science. Among the implemented measures:

This will allow attracting additional funds for science. The work in this direction will be started this year — the draft rules are being coordinated in government agencies.

In 2019, Center produced over 15 thousand tons of high-quality original and elite seeds

Over the previous three-year period of implementation of targeted program financing of science (2015-2017), 173 varieties and hybrids of agricultural crops were created.

"In 2019, according to the transfer and environmental testing, 515 samples of agricultural crops of foreign selection were studied and evaluated, 9 domestic varieties and hybrids of agricultural crops were created and submitted for state testing, more than 15 thousand tons of high-quality original and elite seeds of grain, oilseeds, forage crops were produced,’’ Rakhimbekov informed.

New varieties of these crops have been introduced on an area of ​​more than 1.1 million hectares. In total, there are about 300 developments in crop production. In animal husbandry, our scientists have about 200 developments. An electronic database has been formed, which includes almost 700 works.

It should be noted that some of the institutions are located in rural areas and for 32 villages they are city-forming. The Center has begun to develop programs for the development of these scientific settlements. They provide for overhaul of social and engineering infrastructure facilities, construction of residential buildings. For this, it is proposed to use the capabilities of all state programs (Aul - El besigі, Enbek, Nurly Zher). The first positive example was shown by the Kostanay region.

The Center notes that all the most outstanding achievements of agricultural science will not give results if Kazakhstani peasants and the industry as a whole are not ready to apply them. It is also necessary to legalize personal subsidiary plots. Farms employing about 3.5 million people and producing almost half of agricultural products.

The entire volume of taxes received from agribusiness entities is about 50 billion tenge per year. Therefore, changes in the taxation of agriculture will not affect the budget revenues.

For reference: in the system of the agro-industrial complex there are currently 3 universities that train personnel in agricultural areas and veterinary medicine.

In three universities, 25,595 people study in all areas of training, of which 9,596 students are in agricultural and veterinary specialties.

It should be noted that the percentage of specialized specialties in agricultural universities is low. In this regard, the Center offers:

The center has developed a draft Concept for the development of the National Extension Knowledge System in the field of the agro-industrial complex for 2020-2025.

“In order to ensure human capital and the introduction of technologies by agricultural producers, it is envisaged to improve the program for the dissemination of knowledge, in particular, to increase the number of centers for the dissemination of knowledge and the volume of consulting and educational services, to promote the diffusion of innovations and technologies, and to link research and educational activities with the subjects of the agro-industrial complex, as well as to involve business structures in participation,” Toleutay Rakhimbekov said.

For a large-scale coverage of agricultural producers with the services of a knowledge dissemination system, it is envisaged to create a National Extension Knowledge Distribution System on the basis of higher educational institutions, research organizations, experimental production farms and private business.

For a large-scale coverage of agricultural producers with the services of a knowledge dissemination system, it is envisaged to create a National Extension Knowledge Distribution System on the basis of higher educational institutions, research organizations, experimental production farms and private business.

The structure of the National Extension Knowledge System:

The single operator is the National Agrarian Science and Education Center NJSC.

Regional level — centers for the dissemination of knowledge based on research institutes, agricultural experimental stations and experimental farms.

As Rakhimbekov noted, the Center provides for the implementation of a new scientific and technical program "Applied Scientific Research in Breakthrough Priority Areas in the Agro-Industrial Complex for 2021-2023" through its implementation out of competitive procedures, with a projected amount of funding for 2021 — 7.7 billion tenge, 2022 — 8.3 billion tenge and 2023 — 8.9 billion tenge.

Within the framework of the new scientific and technical program "Applied Scientific Research in Breakthrough Priority Areas in the Agro-Industrial Complex for 2021-2023" it is provided:

In 2020, 16 subsidiaries of the Center plan to attract 50 foreign scientists, of which 2 scientists are at the discussion stage, 12 scientists are attracted free of charge, and 36 scientists will be involved in topics within the framework of the PTF under subprogram 101 “Program-targeted funding of scientific research and events budget program 267 "Increasing the availability of knowledge and research." At present, foreign specialists are involved in 11 research institutes, negotiations are being held to attract them.

Within the framework of the STP Program-targeted financing "Ensuring the technological development of enterprises in the starch-treacle, fat-and-oil, feed, sugar industries of the agro-industrial complex on the basis of innovative technologies for storing and processing plant raw materials" for 2018-2020, the following projects are being implemented:

In addition, as part of the implementation of applied scientific research in the field of agro-industrial complex for 2015-2017 according to the budget program, conditions have been created for the development of processing production, sales of crop products ”, a prototype of a jet pneumatic separator with a closed air flow system has been developed.

The studies were carried out in the production conditions of the economic facility of KazGer LLP in the village of Nevsky, Akmola region, where sealed polyethylene sleeves were placed. In 2010, a batch of wheat grain was formed for laying in sleeves with a moisture content of 12-14%.

Studies of the stored grain in polyethylene sleeves after 6 months have shown that the condition of the grain mass remains unchanged, therefore, the level of risk of preserving grain quality after 6 months of storage is low.

When analyzing the technology of loading grain into polyethylene sleeves by the Begger packaging machine, its advantages and disadvantages were revealed. There is an uneven packing density of the grain — the formation of a wavy surface of the sleeve. It was found that with a decrease in the braking force, airy spaces are formed, and an excessively increased degree of grain compaction leads to a rupture of the film. An application for an innovative patent of the Republic of Kazakhstan was submitted to improve the design of the device.

The study of the temperature of the grain mass under winter storage conditions showed that inside the sleeve at a depth of 20-30 cm from the surface and the temperature of the ambient air outside were practically the same. This layer is a thermal insulator due to the low thermal conductivity of the grain. The obtained correlation coefficient of 0.99 indicates a sufficient degree of adequacy of the obtained equation (conducted experiments).

In the field of ensuring phytosanitary safety, namely the improvement of integrated systems for the protection of fruit, vegetable, grain, forage, legumes, comprehensive recommendations have been developed on measures to combat bacterial burns of fruit crops, a technology has been developed for phytoexamination and health improvement of agricultural seeds, coniferous seedlings, turanga seedlings and poplar hybrids with protective and stimulating compounds.

This year, the State Inspection Committee of the Ministry of Agriculture will be offered a protection scheme and recommendations against fire blight and preparations for temporary registration against fire blight. Among the complex of non-chemical methods for protecting the garden, one of the most effective against the eastern and apple moth is the technology of disorienting males in industrial gardens of the Almaty region on an area of ​​more than 250 hectares.

Also, technologies have been developed for mass breeding of 12 species of entomoacariphages, including those obtained by transfer from other countries, which are successfully used against pests of greenhouses in the republic. The South American tomato moth is a serious quarantine pest of tomatoes and other nightshade crops outdoors and indoors. The pest is currently widespread in Kazakhstan. The Zhiembayev Kazakh Research Institute recommends an integrated method of protecting tomatoes against tomato moth.

An integrated system of protection of melon crops against melon flies using pheromones and plant growth stimulants has been developed. Recommendations have been developed and scientifically grounded systems for the protection of vegetable crops (cabbage, cucumbers, tomatoes) have been proposed for implementation.

More than 300 aboriginal (local) strains-producers of a wide spectrum of activity are in the works for further creation of biological products against harmful organisms of agricultural crops.