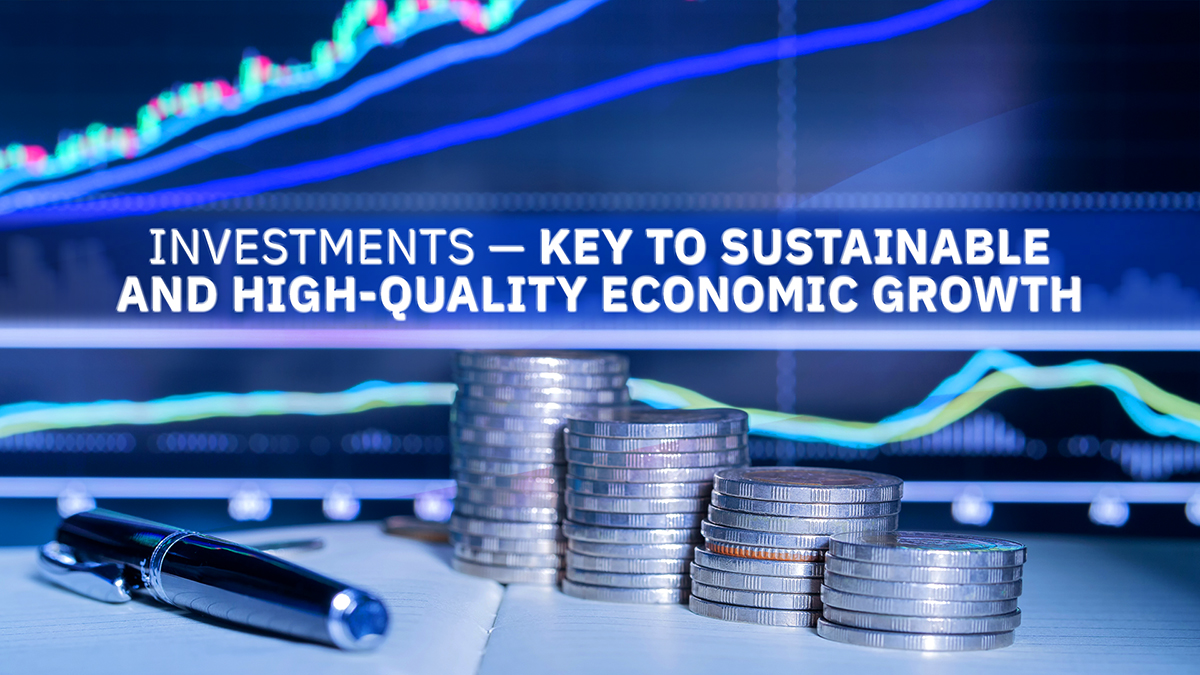 At the final meeting of the State Commission on the State of Emergency, the Head of State ordered to develop individual support measures for each investor based on priority and potential effect on the economy as a whole. As part of implementing this important task, the Government is working to ensure the stability regime of all investment legislation for strategic investors in priority sectors. Read more about the work being done in the review by PrimeMinister.kz.

Despite the difficult situation in the world due to the coronavirus pandemic, Kazakhstan has managed to maintain a positive investment growth rate. At the end of 2019, the gross inflow of foreign direct investment to Kazakhstan amounted to $24.1 billion. At the end of 5 months of 2020, the growth of investments in fixed assets amounted to 0.1%. 15 regions showed growth. Investments in the Turkistan region have almost doubled, and in the Akmola region increased by more than a third.

An ambitious goal has been set to increase the investment to GDP ratio to 30% by 2025. A lot of work is being done to achieve this goal.

Kazakhstan has adopted a Comprehensive Plan to Restore Economic Growth. According to it, investment is seen as one of the key drivers. New fundamental approaches to attracting investment have been identified — direct work with investors to form integral value chains.

Amendments to the legislation were formed to ensure the stability of conditions for strategic investments in priority sectors of the economy. It is planned to actively use the potential of the AIFC to attract investment.

This year, it is planned to launch 40 projects with foreign participation for $4.8 billion.

The Ministry of National Economy is conducting monthly monitoring of the achievement of target indicators for investments in fixed assets.

To increase the efficiency of monitoring work to achieve investment targets, offsite events will be held in the regions.

The Kazakhstan Direct Investment Fund is functioning, which is one of the important mechanisms for attracting and implementing large joint projects.

The main platform for discussing investment policy today is the Council of Foreign Investors under the President of the Republic of Kazakhstan. The Council of Foreign Investors was established in 1998 by the Decree of the First President - Elbasy Nursultan Nazarbayev in order to create a platform for direct dialogue between the Government and foreign investors to solve problematic issues related to their investment activities in the country and improve the investment climate in Kazakhstan.

During the activity of the Council, its members have made a significant contribution to the development of the Kazakhstani economy.

From the moment of its creation to the present, the main tasks of the Council are to develop recommendations and proposals for improving investment policy and key aspects of the country's economic development. The main platform for the exchange of views and submission of proposals by the members of the Council is the annual plenary meeting of the Council chaired by the President of the Republic of Kazakhstan. At the past plenary sessions, issues were discussed such as improving the legal regime for foreign investment, improving the judicial system of Kazakhstan, increasing the efficiency and optimization of the tax system, rules for the import of foreign labor, improving the investment image of the Republic of Kazakhstan, etc.

Since the end of 2004, starting from the 12th plenary meeting, in addition to discussing general issues related to investment activities, the main topic of the meeting began to be approved. As a result of this innovation, the plenary session provides an opportunity to discuss in more detail the development and improvement of the investment situation in a particular industry or direction of the economy.

Human capital as factor in socio-economic development of Kazakhstan

The main topic of the 2019 plenary session was to improve the quality of human capital. Following the meeting of the Council, 6 instructions were given. All orders have been fulfilled.

The Ministry of Education and Science, within the framework of the Roadmap for partnerships with foreign companies for the development and improvement of technical and vocational education, taking into account international requirements, professional standards, has developed 119 flexible educational programs and updated 246 standard curricula and programs that provide for a modular competence approach in personnel training.

Work in this direction will continue as part of the implementation of the State Program for the Development of Education and Science for 2020-2025.

1) academic mobility of the teaching staff and students;

Work in this area will continue.

Creating centers of competence on the basis of existing colleges

As part of the work carried out in this direction, training centers have been created on the basis of 47 colleges, of which, together with foreign companies, 7 centers of competence.

In addition, in January 2020, the Zhas Maman project was launched, which provides 180 colleges with modern equipment in 100 of the most popular professions, taking into account their sectoral development of the regions and in partnership with the world's leading educational institutions.

Extensive discussion of draft new State Program for Development of Education and Science for 2020-2025.

On Dec. 27, 2019, the State Program was approved, the draft of which was discussed within the framework of round tables, working groups with interested government agencies, organizations, as well as with representatives of foreign companies acting as independent experts.

The main goals of this program are to increase the global competitiveness of Kazakhstani education and science, upbringing and training of the individual based on common human values, as well as increasing the contribution of science to the country's economy.

Further training of specialists at the expense of employers

To date, the Ministry of Education and Science, together with Atameken NCE and foreign companies of the Council, through training centers at enterprises at their own expense, trained 3,824 employees.

Also, 93 students receive technical and vocational education at the expense of enterprises, and 71 people have completed advanced training and retraining courses.

The work will continue.

The Ministry of Labor and Social Protection of the Population, together with interested government agencies, organizations and foreign companies, has developed an Atlas of new professions and competencies in demand on the labor market.

As an example, in October 2019, together with ERG, the Roadmap for the implementation of the Atlas was approved.

In addition, on March 18, 2020, in test mode for the mining and metallurgical industry launched an interactive Atlas submodule on the Labor Exchange Internet resource. Work in this area continues.

Together with a foreign party, as part of the work on the consideration of the recommendations of the Council's working groups, the compliance of environmental legislation with OECD standards and international practices is being ensured.

As part of the work to improve the Environmental Code, more than 50 meetings of the working group on the development of the code and additional meetings with representatives of foreign companies were held. At these meetings, topical issues on the regulation of emissions from gas flaring and inspections conducted after gas flaring were discussed.

The draft new Environmental Code is in the Majilis of the Parliament.

Work is also underway to support the use of renewable energy sources.

To date, the Ministry of Energy has developed a draft Law that provides for increasing the attractiveness of the RES sector, reducing the investment risk of investors, providing financial support from the Government of the Settlement and Financial Center for RES Support LLP, increasing the term of the contract for the purchase of electricity from 15 to 20 years, increasing the share of local content at renewable energy facilities. This bill is in the Majilis of the Parliament.

In addition, the Ministry of Foreign Affairs on Feb. 24, 2020, made amendments to the Government Decree on state support for investments, which provides that projects in the field of renewable energy, in addition to exemption from customs duties and the provision of a state in-kind grant, can additionally receive tax preferences.

Work in this area will continue.

Also, another instruction was executed to increase the time for public consideration and discussion of regulatory legal acts. Thus, the Ministry of Justice has developed a draft law aimed at increasing the period of public discussion of projects on the Internet portal of open regulatory legal acts from 10 to 15 working days. Currently, the draft Law is under consideration in the Majilis.

The bill is aimed at improving rule-making, in particular, at involving the public in the law-making process and reforming the procedure for conducting scientific legal expertise and provides for legislatively regulating a new stage of law-making work, prior to developing the concept of the bill.

As for the instruction to decriminalize tax criminal offenses, the Ministry of Finance jointly with interested government agencies and foreign companies, within the framework of the working group on the implementation of investment policy, developed proposals to determine the amount of damage as a percentage of the amount of taxes calculated by the taxpayer for the audited period, which are currently being worked out with The General Prosecutor's Office.

Particular attention is paid to work to improve the quality of human capital. In this direction, the Enbek State Program is being implemented, aimed at promoting productive employment of the population and involving citizens in entrepreneurship.

In addition, the Ministry of Labor is working to build a high-quality system of qualifications, which in the future will allow training personnel that meet the requirements of employers and the new economy.

In order to improve the procedure for attracting foreign labor, the Ministry of Labor, Foreign Investors’ Council chaired by the President of the Republic, together with representatives the European Business Association and the American Chamber of Commerce, has developed a corresponding draft law, which is currently being considered by the Senate of the Parliament.

The bill provides for:

In general, over the past period, all responsible state bodies and organizations, foreign companies of the Council have taken all the necessary measures to fulfill the protocol instructions of the 32nd plenary meeting of the Council. All of them are under special control.