Tax incentives, limiting of inspections and concessional lending: What measures taken in Kazakhstan to support business during state of emergency 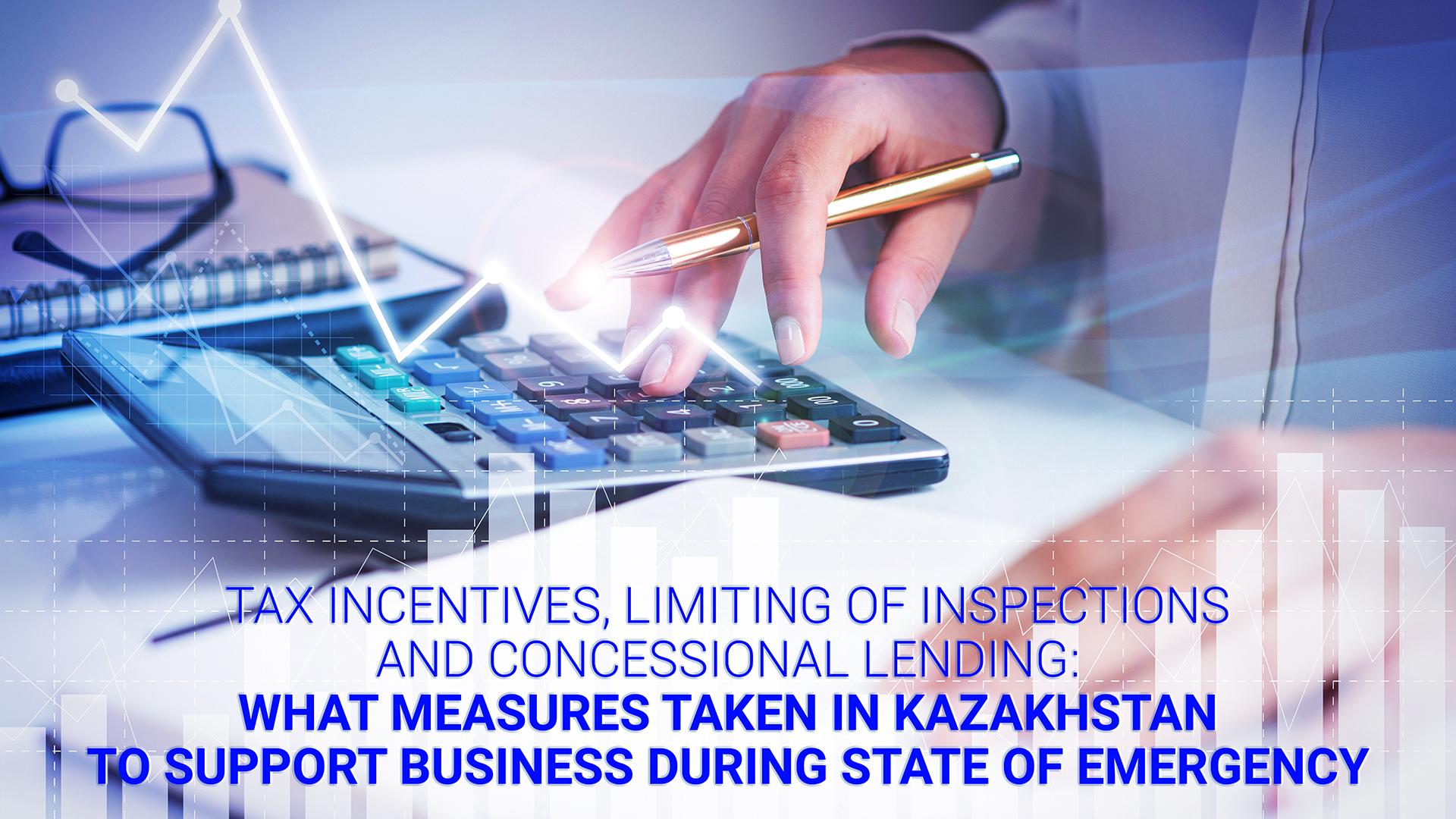 President of the Republic of Kazakhstan Kassym-Jomart Tokayev ordered to provide unprecedented support to small and medium-sized businesses during the state of emergency in the country. Kazakhstani entrepreneurs need additional support in terms of reducing the tax burden. This is especially important in terms of maintaining employment and paying salaries. Therefore, for SMEs in the most affected sectors of the economy, the accrual and payment of taxes and other payments from the wage fund is canceled for six months. Read more about measures taken to support domestic business in the review by PrimeMinister.kz.

Under current conditions, the Government of the Republic of Kazakhstan, on behalf of the Head of State, takes urgent measures to support SMEs. New initiatives include increasing the availability of business to financing, the implementation of additional tax incentives, and limiting business from inspections.

In accordance with the Decree of the Head of State “On Further Measures to Stabilize the Economy,” tax incentives were adopted to support business. They cover various sectors of the economy from trade to tourism.

Preferences for entrepreneurs or tax holidays for the state of emergency

Until June 1, 2020, micro, small or medium-sized enterprises have been granted a deferral of payment of all types of taxes and other obligatory payments, and social payments.

Also, until June 1,2020, the suspension of the adoption of penalties, suspension of expenditure operations, limitation of disposition of property and measures for the collection of tax and customs debt, social payments debt (except for taxpayers with a high degree of risk) were adopted.

A property tax exemption has been established before the end of the year for large shopping facilities, shopping centers, cinemas, theaters, exhibitions and sports facilities, as well as for taxpayers working in the catering, hotel and tourism sectors.

The taxpayer has the right to provide an additional calculation of the amounts of current payments on property tax and land tax for the next 3 terms (1 payment deadline for current payments passed in February), based on the fact that for 3 months (January, February, March) the rate is in accordance with the Tax Code, and for the next 9 months, the taxpayer has the right to cancel its current payments. At the end of the year, a declaration will be presented on the basis of such a tax calculation algorithm.

Individual entrepreneurs working in accordance with the generally established taxation procedure are also exempted from individual income tax by the end of the year. In order to support the agro-industrial complex, the import of biological assets of the agricultural sector, including cattle and breeding chickens, will not be subject to VAT.

At the same time, in order to level the price increase, the VAT rate was reduced from 12% to 8% for socially significant food products until Oct. 1, 2020.

This rule applies only to socially significant goods.

In terms of tax administration, until June 1, 2020, a delay has been introduced for SMEs on the payment of all taxes and obligatory payments to the budget and social contributions (PIT, social tax, social and medical insurance for an employee), as well as work on compulsory collection of tax and customs debt and social payments.

In order to reduce fiscal pressure on the business for the period of emergency, tax audits have been suspended.

At the same time, the Head of State instructed to exempt SMEs from paying taxes and obligatory payments from the payroll fund for the period from April 1 to Oct. 1, 2020. in the most affected sectors of the economy, including retail, catering, hospitality, transportation and consulting services, and IT.

For the above categories of taxpayers, until Aug. 15, 2020, accrual of interest on all unfulfilled tax obligations was suspended for all types of taxes and the tax reporting deadline was postponed to the third quarter.

The principle of VAT payment of on imports by the offset method is that the importer-payer of VAT has the right not to pay VAT when filing a customs declaration. But there are several conditions. The importer must be a VAT payer, the goods are not intended for further sale. The importer in the next tax return reflects VAT both in offset and in sales. In case of further sale before the expiration of five years, VAT on imports is payable from the date of import with interest.

Also, the deadlines for the execution of notifications based on the results of cameral control, sent from March 15 to April 15, 2020, have been extended. (with the exception of taxpayers with a high degree of risk).

By the end of the year, oil and gas refineries (excluding aviation) and diesel fuel (500 thousand tons of gasoline worth 12 billion tenge) sold for export are exempted from excise taxes.

According to the current legislation, the producer of petroleum products is the payer of the excise tax, regardless of the further sale within the Republic of Kazakhstan or for export, although the producer is not the owner of the oil and oil products received (the owner is the dealer). In this case, the export of excisable goods shall be exempted from excise duty.

The excise tax rate for gasoline production is 24,395 tenge per 1 ton, for diesel fuel production 9,300 (July-November), 540 tenge (from December to June for the sowing season) per 1 ton.

Thus, exported products should become cheaper by the amount of excise duty.

To administer the volume of refining and exporting petroleum products, a temporary procedure is being developed to provide information by the tax authority from the manufacturer and the contractor. Excise and customs data will also be used.

When a debt arises, a notice of debt repayment is not issued and enforcement measures are not taken, settlement accounts are not closed and property is not described.

The deadlines for the execution of a notice on cameral control that have occurred during a state of emergency have been extended (with the exception of taxpayers with a high degree of risk). Office control notifications requiring execution within the period from March 15 to April 15, the deadline is postponed to June 1.

In order to minimize contact between the taxpayer and the tax authorities, a decision was made to postpone the deadlines for the notification.

Thus, the taxpayers that have a deadline for fulfilling a notification within the time limit for an emergency may not provide a response until June 1, with the exception of the taxpayers with a high degree of risk. In this case, the restriction in the form of suspension of expenditure operations on settlement accounts will not be applied.

Microfinance organizations of Kazakhstan, in view of the announced emergency situation, are introducing concessions similar to banks for borrowers. The main condition is the absence of an overdue debt from the borrower until March 17, 2012. Separate conditions will be determined individually by each micro financial institution. MFIs are ready to provide the following support to borrowers:

Starting March 26, the Ministry of Finance and the Ministry of Foreign Affairs unilaterally terminated the calculation of lease payments until June 20 under 7,701 state property lease agreements. During this period, approximately 1.2 billion tenge will not be received in the republican and local budgets.

A similar work is being completed on property that is being leased by the quasi-public sector entities independently within the framework of corporate procedures.

Along with this, the Gosreestr portal (www.gosreestr.kz) has an electronic service for exemption from rental payments. Tenants are informed about this service, it is enough for them to submit an application through the portal.

For reference: today in the republic 8,154 lease agreements are registered, the total payment of which is about 432 million tenge monthly. In three months, the business will save about 1.3 billion tenge.

The Agency of the Republic of Kazakhstan on Regulation and Development of the Financial Market in implementing the instructions of the President of Kazakhstan, has taken a number of measures to support the population and entrepreneurship during the state of emergency.

To implement this program, 600 billion tenge is allocated to small and medium-sized enterprises and individual entrepreneurs through the placement of conditional deposits in second-tier banks.

The business support mechanism is implemented by providing second-tier banks with soft loans for working capital replenishment to small and medium-sized enterprises, individual entrepreneurs who suffered as a result of the state of emergency, for up to 12 months at a rate of no more than 8% per annum.

The term for the development of funds by second-tier banks is three months. Restrictions for small businesses up to 3 billion tenge, for individual entrepreneurs – up to 50 million tenge.

In addition, an additional 84.5 billion tenge is planned to be allocated for the implementation of the Business Road Map. It is envisaged to strengthen measures to support entrepreneurship through subsidizing and guaranteeing loans to entrepreneurs. This will create about 16 thousand jobs. As part of the clarification, additional costs in the amount of 50 billion tenge are envisaged for the implementation of the Enbek program. As a result, the development of mass entrepreneurship will continue, the creation of an effective model of labor mediation and skills, including support for socially vulnerable groups of the population.