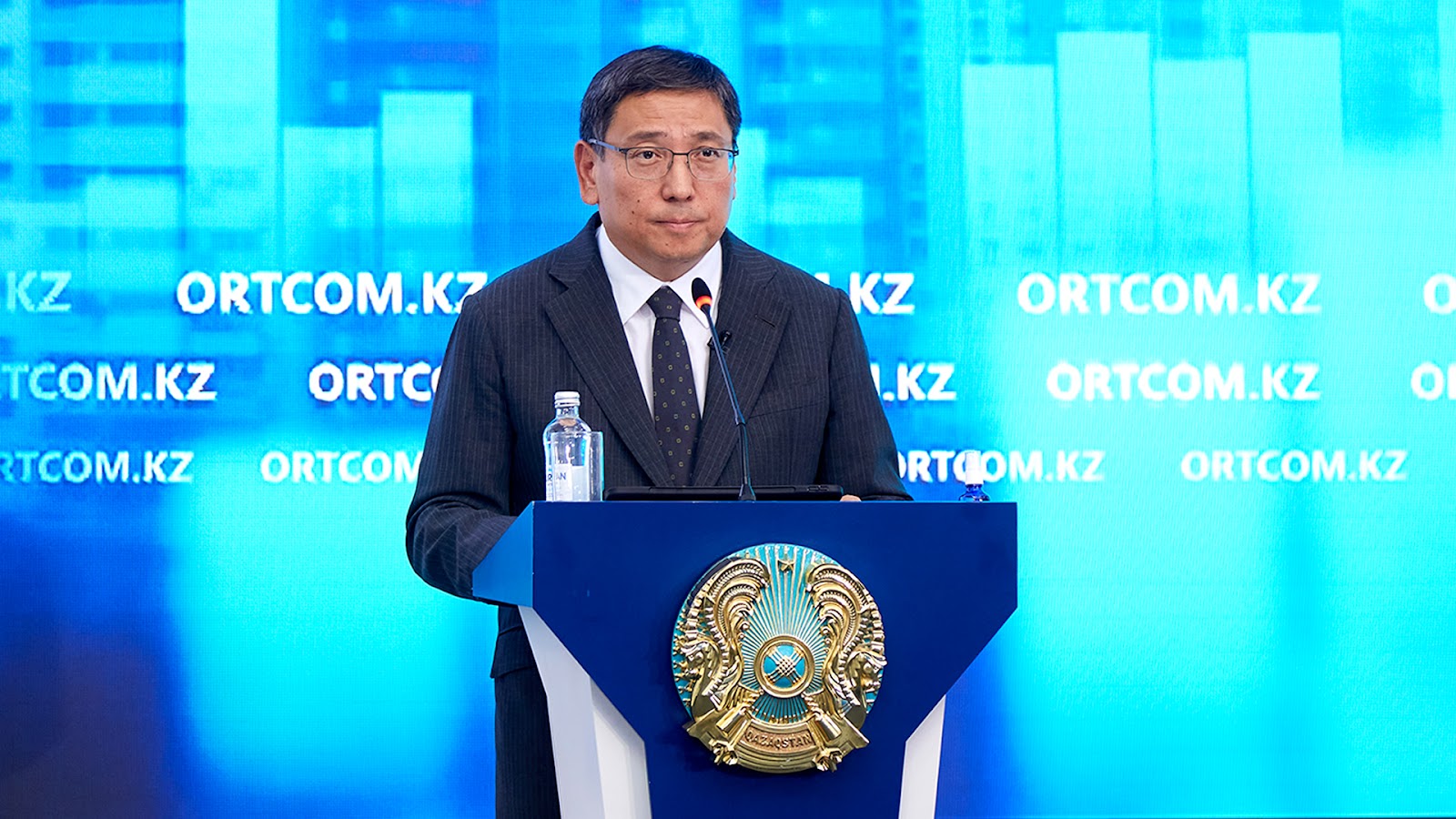 Akim of Almaty Erbolat Dossaev presented a report on the social and economic development of the city within the framework of the instructions of the Head of State in the Central Communications Service.

The head of the southern capital traditionally began his speech with presenting figures. First of all, he spoke about the results of the referendum recently held in the country. Thus, the majority of Almaty residents supported the initiatives of the President Kassym-Jomart Tokayev, giving 65.22% of their votes in favor of amending the Constitution. Voter turnout was 32.99%.

“Almaty residents confirmed their adherence to the course for the construction of the ‘New Kazakhstan,” said Dossaev.

Further on the level of employment of Almaty residents. The situation on the labor market remains stable. The unemployment rate is 5.1%.

In total, since the beginning of the year, 17.1 thousand jobs have been created, including 7.3 thousand permanent ones.

“In order to ensure maximum involvement of labor resources, a transition will be made to systemic measures to create new high-quality jobs,” said Erbolat Dossaev.

As for the issue of social support for the population, in the 1st half of this year. targeted social assistance was provided to 19.4 thousand people for a total of 803.8 million tenge.

It must be said that against the backdrop of a significant population growth and the annexation of new territories, a serious challenge for Almaty is the lack of social infrastructure. As the mayor said, to resolve the issue, the city will implement a medium-term policy of managed deficit.

“The shortage of places will be reduced through the construction of new public and private educational facilities. A mechanism is planned for placing the primary classes of public schools, as branches, on the first floors of residential complexes,” explained Dossaev.

In the field of secondary education, this year it is planned to commission 18 facilities for 13.8 thousand places, including 11 new schools for 10,750, 5 extensions for 1,270 places to existing public schools and the purchase of 2 buildings for 1,800 places.

Erbolat Dossaev also noted that the development of primary medical and social care is a priority in the work of the akimat. To reduce the burden on polyclinics and increase the availability of consultative and diagnostic services until the end of this year. the construction of 2 family medical outpatient clinics in the Kemel and Mamyr microdistricts, as well as the overhaul of the city polyclinic No. 11, is being completed. The construction of three outpatient clinics in Sayaly, Karasu and Nurshashkan microdistricts will also begin, the completion date is 2023.

To reduce maternal and infant mortality this year, the construction of a new building of the Children's Emergency Center will be completed, the technical equipment of 4 maternity hospitals and 2 children's hospitals will be improved. The total amount is 2.8 billion tenge.

“Unfortunately, last year a high level of maternal mortality was recorded. in the first half of this year in our city, there were 3 cases of maternal death, including 2 in the Scientific Republican Center for Obstetrics, Gynecology and Perinatology, which belongs to the Ministry of Health, and 1 in the City Center for Perinatology and Pediatric Cardiosurgery,” said the Akim of Almaty.

To reduce mortality from diseases of the circulatory system, cancer pathologies, multidisciplinary hospitals will be modernized in the amount of 6.9 billion tenge as part of a three-year program. It also trains 240 doctors in acutely scarce specialties and trains 1,000 nurses.

The development of primary healthcare in 2022 will increase the availability and quality of medical services and reduce maternal mortality by 3 times.

Well, according to Erbolat Dossaev, the main drivers of the growth of the city's economy were the manufacturing industry, construction, transport and communication services.

“There is a high investment activity, since the beginning of the year, the growth of investments in fixed assets amounted to 20.9%,” he said.

The main branch of the city's economy, trade, for the first time since the beginning of the year entered the positive zone with an increase of 1.7%. For 5 months of this year business activity index in Almaty grew by 4 p.p. and by the end of May amounted to 48.7%. Exit to the positive zone over 50% is expected in the first half of the year.

The speech of the akim of Almaty was not without a report on the work done to restore the city after the January events. Thus, on behalf of the Head of State, the work on payment to SMEs affected in January 2022 has been completed. In total, 1,594 applications for 14.5 billion tenge were approved.

“Small and medium business is the foundation of the city's economy, where 64% of the able-bodied population is employed. Therefore, special attention is paid to business support. In 2022, the budget was increased by 5 billion tenge to 46.9 billion tenge. To date, 219 SME projects have been financed for 16.5 billion tenge,” Dossaev said.

There is an increase in investment activity. For 5 months of this year the volume of private investment increased by 22.1%.

The greatest growth is observed in the construction industry, industry, transport and warehousing, the share of which is 55%.

In the 1st half of this year 10 investment projects were implemented in the amount of 132 billion tenge. In general, this year it is planned to implement 77 private projects worth 588 billion tenge with the creation of 2.8 thousand permanent jobs with high labor productivity.

About inflation. High growth rates of prices remain in Almaty. Based on the results of 6 months of this year, inflation was 10.3%.

The main contribution to inflation was formed, first of all, due to the growth in food prices, which amounted to 16.4%. The largest growth is observed for sugar, onions, bread, milk, whose contribution to the consumer price index amounted to 2.2 percentage points. At the same time, a decrease in prices is noted for eggs. A slight increase in prices is observed for beef, butter, salt.

To curb the rise in prices for socially important foodstuffs, preventive measures are being taken.

“Against the background of a possible increase in sugar prices, the risks of declining groceries stocks, mass exports of vegetable products to Russia, the issues of allocating separate quotas for the import of sugar to large retail chains and limiting the export of groceries and vegetables are being worked out,” the Akim of Almaty said.

The development of transport infrastructure is also one of the indicators of comfortable living for citizens and reducing traffic congestion.

1) May 30 this year 2 metro stations Saryarka and Momyshuly, which increased the daily passenger traffic by 1.9 times to 86 thousand people;

3) construction of three transport interchanges is underway, one of them "Bukhtarminskaya - Kulzhinsky tract" will be completed at the end of this year, two - in December 2023;

4) this year, the construction of 50 km of new roads in five microdistricts will be completed, the average repair of 200 km of roads with the arrangement of 100 km of sidewalks and 80 public transport stops.

As a result, the share of roads in good and satisfactory condition in Almaty this year will be increased to 86%.

In the field of power supply, the construction of 2 power substations is underway, covering 400,000 residents. Almagul substation will be completed this year, Tuzdybastau substation — in July 2023. Also this year, 138 km of electrical networks will be upgraded.

In order to ensure high-quality water supply, the construction of a water intake on the river. Kargaly will be completed this year.

“Until the end of this year. We will start building a water intake on the river. Aksay and complete the development of design and estimate documentation for the construction of the Ermensay water intake,” the akim shared his plans.

Dossaev said that the construction of new water sources this year will provide coverage for more than 150 thousand citizens in the annexed territories. This year, 16 facilities of water supply and sewerage networks with a length of 632.2 km are being built, covering about 110 thousand people.

In the first half of this year 45 km of networks were laid. In the second half of this year. the construction of 10 facilities with a length of 371.2 km will be fully completed. As a result, the depreciation of networks for water supply will decrease to 55.8%, for sewerage — to 57.5%.

Against the backdrop of the complex relief of Almaty, flooding is observed during heavy rainfall. The survey identified 102 areas of permanent flooding in Almaty. In March this year. monthly precipitation amounted to 166.3 mm with a norm of 76 mm; — 141.6 mm at a rate of 106 mm.

By the end of 2022, 56 flood areas will be eliminated and 12 collectors will be restored, 75 km of canal networks will be modernized. As a systemic measure, storm sewers will be transferred to a single operator, Eco Almaty LLP.

As part of the instructions of the Head of State, active work is being carried out to plant greenery and beautify the city. This year, 4 new park zones will be launched. Improvement of 4 squares will also be carried out.

According to the Zhasyl Almaty program, 145 thousand seedlings have been planted since the beginning of this year. By the end of the year, it is planned to plant another 360 thousand trees, which will ensure the fulfillment of the plan for planting 1 million trees in three years.

On behalf of the Head of State, by the decision of the Maslikhat of the city of Almaty dated June 20, 2022, additions were made to the building regulations of the city of Almaty. So, south of Al-Farabi, the parameters for the construction of healthcare and education facilities with a height of no more than 15 meters have been determined. Also, the division of agricultural land and the construction of low-rise buildings in the strip of mountain counters, as well as on sites with a slope of 15 degrees or more, is not allowed.

“We also plan to resume the activities of the town planning council of the city in a new format from August 1 this year, where, with the involvement of independent experts, decisions will be made on proposed urban planning and architectural projects through open discussion. According to the Decree of the President of the Republic of Kazakhstan 'On holding reporting meetings with the population' in the II quarter of this year. The akimat held 38 meetings with residents in all districts of the city, including 8 of my meetings in each district,” Erbolat Dossaev informed.

He added that more than 40,000 residents took part in the meetings and 1,917 questions were voiced, of which 36.2 thousand people took part with the mayor of the city, 663 questions were voiced. About 60% of the issues raised by the residents concerned the improvement and ecology, engineering and transport infrastructure, land and housing, social facilities, and entrepreneurship.

June 27 this year a draft of the main priorities of the Development Plan was published for public comment. The project "gained" more than 13.6 thousand views. 1,280 comments and responses were received from almost 400 people. A significant part of the proposals of the townspeople concerned the creation of a comfortable urban environment and issues of ecology and improvement.

July 4, this year, the "Main Priorities of the Development Plan" were presented and approved at a meeting of the Public Council with the participation of Maslikhat deputies and external experts. The plan for the implementation of the main development priorities of Almaty will be approved within the next 2 months — by September 5 this year.