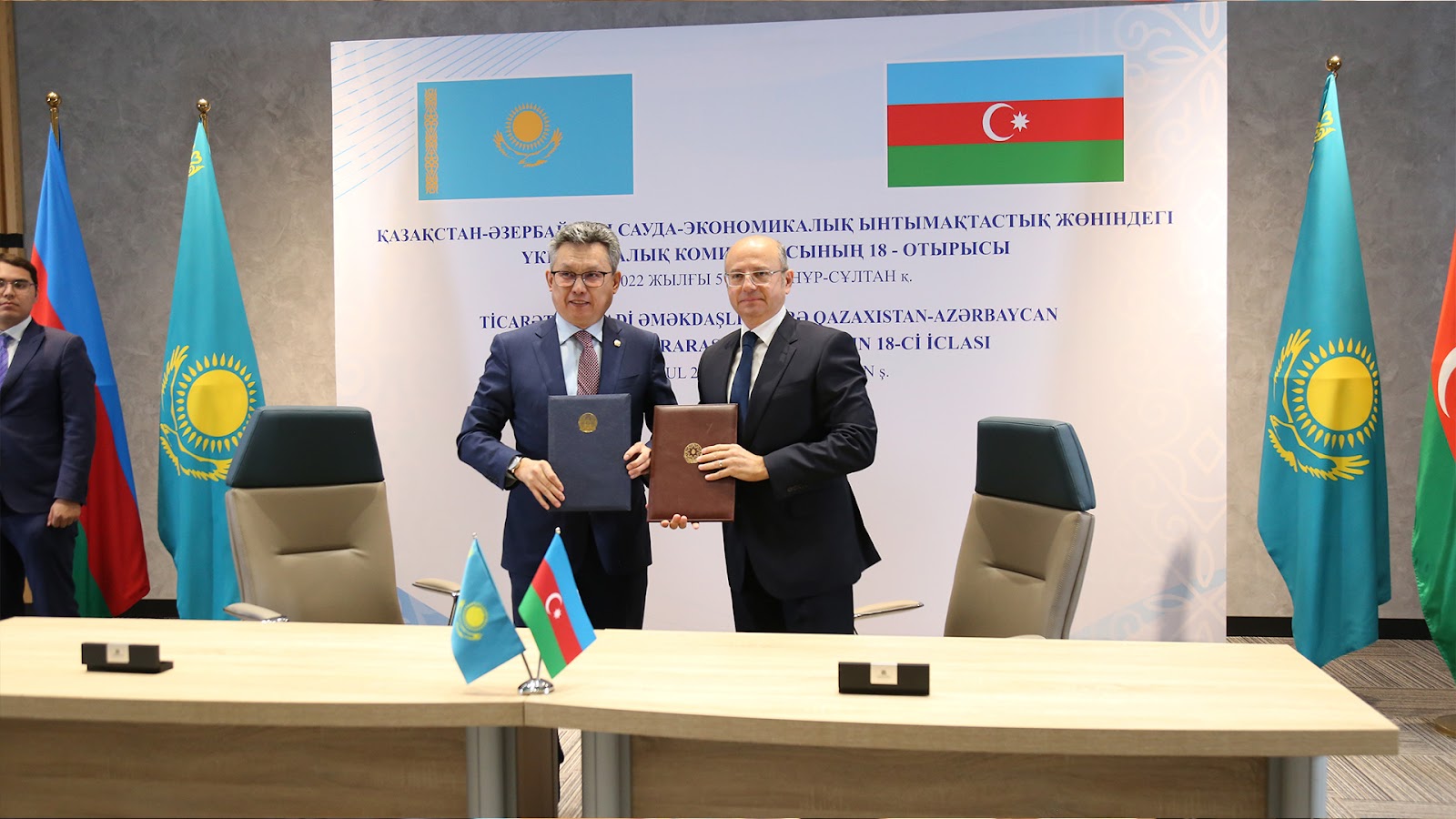 The XVIII meeting of the Kazakh-Azerbaijani Intergovernmental Commission on Economic Cooperation was held in Nur-Sultan.

The Commission co-chairs from the Kazakh side were the Deputy Prime Minister of Kazakhstan - Minister of Trade and Integration Bakhyt Sultanov, from the Azerbaijani side — the Minister of Energy Parviz Shahbazov.

Members of the Commission and representatives of the ministries and departments of the two countries took part in the meeting.

The parties discussed issues of interaction in the field of trade and economic cooperation, the fuel and energy complex, transport, agriculture, space and information and communication technologies, etc. During the meeting, Bakhyt Sultanov noted that Azerbaijan has always been and remains a reliable partner of Kazakhstan in the South Caucasus, with which we are connected by common historical roots, centuries-old ties of friendship and a constructive political dialogue. It should be noted that this year the countries celebrate the 30th anniversary of the establishment of diplomatic relations.

“The course set 30 years ago is successfully developing under the leadership of Kassym-Jomart Tokayev and Ilham Aliyev. For our part, we once again emphasize the traditionally friendly nature of bilateral relations between Kazakhstan and Azerbaijan, due to long-standing historical and cultural ties,” Sultanov said.

At the moment, the export of wheat, rice has increased, the supply of railway locomotives and flat products has increased. Deliveries of new Kazakh goods to Azerbaijan are noted. These are ferrous scrap, rails, mineral fertilizers.

The Minister of Trade and Integration noted that Kazakh companies are interested in establishing uninterrupted exports of industrial and agricultural goods to the Azerbaijani market.

“The Ministry of Trade and Integration is actively implementing the Export Acceleration Program, which provides for the training and support of exporters. Azerbaijan has been chosen as the target market this year. 23 companies — manufacturers of chemical, machine-building, food and light industries, are moving into an active phase of negotiations with Azerbaijani partners," the Deputy Prime Minister said. In turn, the Minister of Energy of Azerbaijan Parviz Shahbazov noted that the “Comprehensive Program for the Development of Cooperation between the Republic of Azerbaijan and the Republic of Kazakhstan for 2022-2026”, which is being agreed upon, “is of great importance in the context of deepening bilateral cooperation and will become a roadmap for development of dialogue between the two countries”. He also invited Kazakh investors to take advantage of the unique investment opportunities and favorable business conditions available in the Alyat Free Economic Zone in Azerbaijan.

Also during the meeting, the Kazakh side raised the issue of changing traditional routes. According to Bakhyt Sultanov, the Caspian region plays an important role for Kazakhstan in the formation of trade flows, being the only sea gate, and provides further access to major sea trade lines through the Trans-Caspian route and the North-South corridor. In connection with this, the Government of Kazakhstan has begun implementing projects for the construction of a container hub based on the port of Aktau and the laying of second railway lines in the Dostyk-Moiynty section. These measures are designed to increase the transit potential of Kazakhstan and the capacity of TMTR.

“In order to fully unlock the transit potential for cargo flows from China / Central Asian countries to European countries and back, it is important to start timely modernization of technical and tariff conditions in ports, which will serve as a driver for all trade and economic cooperation,” Sultanov noted.

The event reviewed the work done over the period since the 17th meeting of the Intergovernmental Commission held in Baku. Also, in total, 14 sections were discussed within the protocol project of the commission meeting.

At the end of the meeting, the republics signed a protocol on the results of the 18th meeting of the Joint Intergovernmental Commission on Trade and Economic Cooperation. An agreement was reached to hold the 19th meeting of the commission in Baku next year.