Meeting chaired by Elbasy with participation of members of the Government, Nur Otan party and its faction in Majilis of the Parliament 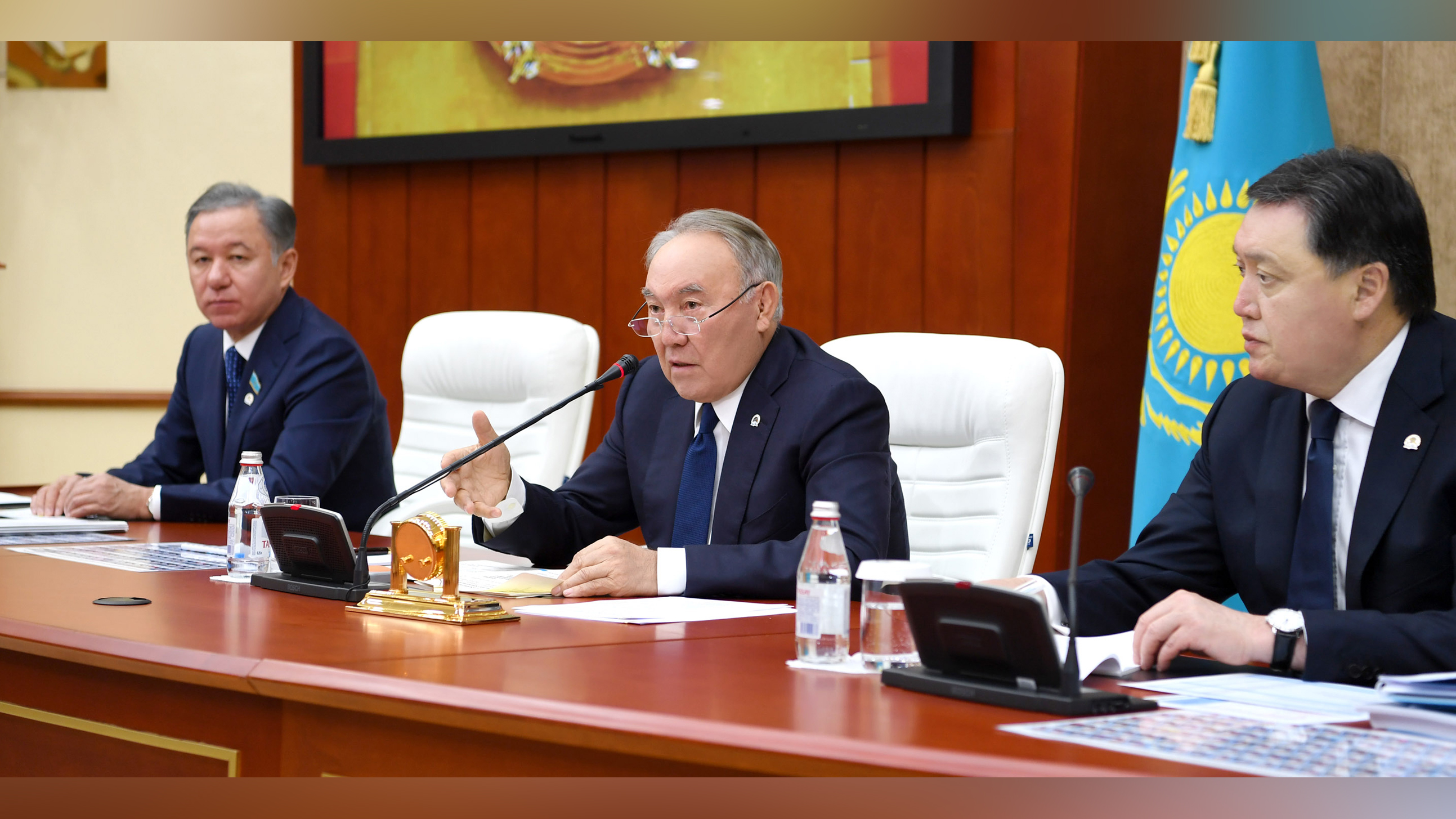 After listening to the information presented, Nursultan Nazarbayev emphasized the special role of the party in the development of the country and improving the welfare of the people.

“Today, our party faces the task of consolidating society, rallying the elites around the country's President-elect Kassym-Jomart Tokayev. The party, as the country's leading political force, must ensure the continuity of the strategic course of development of our state. Therefore, the Government and the Faction must solve specific problems of people together,” said the party chairman.

“We have achieved positive results. For three and a half years, more than 430 thousand jobs have been created, 2.7 thousand kilometers of roads have been built. Eurasian Transcontinental Corridor have been launched. The share of small and medium-sized businesses in the country's GDP reached 28 percent. In just one year, we improved Kazakhstan’s Doing Business rating by 8 positions, taking 28th place,” said the First President of Kazakhstan.

Nursultan Nazarbayev emphasized that the election program of the winning party should form the basis of the five-year activity of the Government, and members of the Party Faction in the Majilis should constantly monitor the implementation of the program, timely responding to possible risks.

“Our task is to maintain long-term leadership. The work on the preparation of the new Election Program of the party for the elections to the Majilis must begin today. It should be based on a strato-oriented approach, express the interests of different social groups in a precise manner, and respond to specific requests of people,” said the party chairman.

At the same time, Elbasy focused on the implementation of development programs for the country's regions.

“Now these strategic programs are carried out formally. There is no appropriate control over their implementation. Some points are not implemented at all. There are constant adjustments to planned indicators. Therefore, the Ministry of National Economy, together with the Nur Otan party and its fractions, needs to organize a hearing on the implementation of these programs. We need to start developing new programs for the development of territories until 2025,” said Nursultan Nazarbayev.

In this regard, the First President of Kazakhstan ordered by March 1, 2020, to complete the development of territorial development programs for each district, city, and region.

Elbasy also dwelled on the current work of the Nur Otan Party Faction in the Majilis of the Parliament and maslikhats, emphasizing that the rating of the Nur Otan party is based on the work of deputies of all levels.

Nursultan Nazarbayev instructed to reconsider the format of working trips of deputies to the regions and to intensify work on holding meetings of the first leaders with citizens in the public reception rooms of the party.

“The analysis showed that the deputies of our party are not actively using the media. In addition, the Nur Otan faction does not always take the initiative on a wide range of issues of concern to society. Over the past few months, members of the Nur Otan faction have not expressed their position on almost any resonant case,” said the First President of Kazakhstan.

In addition, Elbasy stressed the need to exclude bureaucracy and complicated coordination procedures in the process of the Faction.

Nursultan Nazarbayev also instructed to intensify the work of party bodies – the Party Control Committee and the Republican Public Council for Combating Corruption.

“Deputies included in these bodies should actively participate in their work. You should ask urgent questions in a constructive way, propose concrete solutions, involving our public,” said the Party Chairman.

At the same time, the First President of Kazakhstan noted that the deputies of the Faction practically did not take advantage of the legislative initiative entrusted to them by the Constitution of the country.

“Deputies are the backbone of the party, the foundation of an active electorate. The people delegated to you through the party the appropriate authority. You must work to solve the problems of our citizens,” said Elbasy.

At the end of the speech, Nursultan Nazarbayev emphasized the importance of maintaining the party’s political leadership.

“Our main task is stability, prosperity of Kazakhstan and improving the well-being of all citizens. Therefore, it is important to make every effort to fulfill our promises,” concluded the party chairman.