About 2.5 million tons of seeds harvested in Kazakhstan in 2021 — Ministry of Agriculture 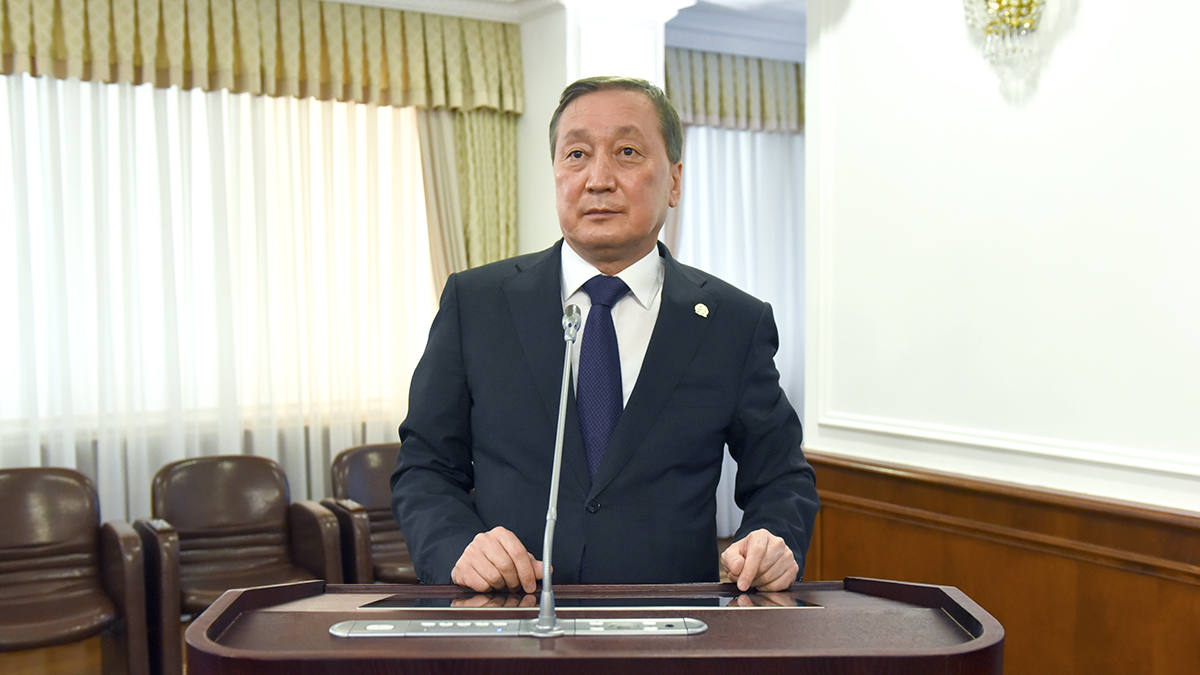 During the government session chaired by Prime Minister Askar Mamin, the issue of completing spring field work in the country was considered. Minister of Agriculture Saparkhan Omarov, Ministers of Ecology, Geology and Natural Resources Magzum Mirzagaliyev made reports on the results of the sowing and growing season.

In his report, the Minister of Agriculture reflected data on the diversification of the structure of sown areas, the provision of resources, fertilizers, fuels and lubricants and agricultural machinery for farmers, also spoke about financing, the impact of agricultural technologies on yields and phytosanitary conditions in the fields.

As the minister noted, according to the operational data of the akimats in the current year, agricultural crops are located on an area of ​​22.7 million hectares, which is 78 thousand hectares more than the level of 2020.

According to the minister, about 2.5 million tons of seeds were procured for the harvest of 2021 across the republic, which fully corresponded to the sowing conditions.

“It should be noted that more than half of the sown varietal seeds are of Kazakhstani selection. Work is underway to equip domestic seed farms with modern breeding and seed cleaning equipment,” said Omarov.

As a result of government support, the percentage of using low-quality seeds in 2016-2020 decreased to 7.2%, the share of elite seeds reached 6.8%.

According to the minister, a high proportion of the use of seeds not lower than the third reproduction is noted in the North Kazakhstan, West Kazakhstan and Almaty regions.

Positive dynamics is observed in Akmola, Kostanay and Kyzylorda regions.

According to the head of the Ministry of Agriculture, 30.9 billion tenge was allocated to increase the use of fertilizers in the current year, which will bring the volume of fertilization to 25% of the scientific need.

“As of June 4, 405.3 thousand tons of mineral fertilizers (63% of the plan) were delivered to the agrarians, and there are also 29.4 thousand tons in storage warehouses. It should be noted that the shipment continues, and certain volumes will be brought in for autumn plowing,” said Omarov.

The rest of the regions, as the minister noted, it is necessary to increase the volume of fertilization to the planned indicators. Moreover, until 2023, at the request of akimats and agrarians, in order to prevent a decrease in the use of fertilizers, the Ministry of Agriculture suspended the requirement to provide agrochemical cartograms for receiving subsidies.

During the sowing campaign, special attention was paid to the provision of agricultural machinery. In general, 142 thousand units of tractors, 4.3 thousand high-performance seeding complexes, 73 thousand seeders, 221 thousand tillage implements were involved in the complex of spring field work in the republic.

“Out of the available 142 thousand tractors, 75% have a depreciation service life of over 15 years, and we can say that no more than 35 thousand units of tractors (25%) have practically fully participated in the production cycle, which shows a high wear of the tractor fleet” ascertained Omarov.

Analysis of the renewal of the agricultural machinery park shows that the regions do not reach the minimum technological level of renewal by 6%.

Today, according to the minister, a high level of renewal is observed in Aktobe, Kyzylorda and Karaganda regions, a low level of renewal in Almaty, West Kazakhstan and Atyrau regions. The average update rate for 2020 was 4.1%.

To accelerate the rate of renewal of equipment, regional akimats need to attract funds from the local budget and additionally increase the standards for subsidizing the acquisition of priority types of agricultural equipment, including for cooperative associations. This regulatory right is provided for by the rules of investment subsidies.

In this year there is an increased demand from farmers for domestic machinery. According to the Ministry of Industry and Infrastructure Development, as of May, domestic enterprises produced more than 1.6 thousand tractors, which is 3.2 times more than the level of 2020.

The purchasing power is facilitated by the use of investment subsidies as an initial payment, as well as preferential lending programs for domestic equipment. Moreover, for some models of tractors, demand is even higher than production.

Domestic-assembled tractors are in great demand among farmers.

“For the harvesting campaign, we expect an increase in the production of popular models of Akros and Essil combines, as well as the start of production of CLAAS combines in the North Kazakhstan region,” said Omarov.

Acceleration of the acquisition dynamics, he said, will be facilitated by an increase in the investment subsidy standard approved by the Ministry in early May of this year.

In total, in 5 months of 2021, 8.7 thousand units of agricultural machinery were purchased for the amount of 140.8 billion tenge with a share of domestic equipment at the level of 70%, which is 2.2 times more than the level of acquisition for the same period.

“We expect that by the end of the year the renewal of the machine and tractor fleet will reach 4.4%, which will contribute to the fulfillment of the instructions of the Head of State to increase labor productivity by 2.5 times,” Omarov noted.

According to the analysis of the Ministry of Agriculture, with relatively equal conditions for the use of high-quality seeds and technical equipment, the level of application of mineral fertilizers has a noticeable effect on the yield of agricultural crops.

In addition, the purchase amount of the Food Contract Corporation is 47 billion tenge.

“Forward contracts have been concluded in the amount of 743 thousand tons for such products as: wheat, barley, sunflower, rapeseed, flax, buckwheat, oats and soybeans. This will make it possible to have in stock raw materials for the production of socially significant goods, as well as a fodder fund for livestock and poultry farms,” Omarov reported.

“At the same time, a fixed preferential price for diesel fuel was provided for 165 tenge / liter, taking into account delivery, which is 14% cheaper than the market value. As of June 10, contracts were concluded for about 350 thousand tons (92%) of which more than 331 thousand tons (87%) were shipped,” Omarov noted.

"The increase in the production of these crops will contribute to the saturation of the domestic market with socially significant agricultural products and an increase in the workload of domestic processing enterprises," said the head of the Ministry of Agriculture.

Getting a high-quality and high yield largely depends on a favorable phytosanitary environment.

“38 million hectares of agricultural land will be surveyed to identify foci of the spread of locust pests. 183 units of special equipment will be involved in chemical processing,” Omarov informed.

Chemical treatments are carried out at the optimum time with high biological efficiency.

In general, in 2021, the spread of especially dangerous harmful organisms is predicted on an area of ​​3 million hectares, including diseases of grain crops (rust, septoria blight) — 1.9 million hectares, gray grain scoops — 328 thousand hectares.

“Chemical weeding against weeds is planned for an area of ​​7 million hectares. Survey activities are currently being carried out,” Omarov concluded his speech.

In turn, the Minister of Ecology, Geology and Natural Resources Mirzagaliyev briefly informed about the progress of the growing season in 2021.

According to him, in the southern regions of the country (Almaty, Zhambyl, Turkistan, Kyzylorda regions), which account for up to 97% of all irrigation water, vegetation takes place in conditions of low water conservation.

In Almaty region, in the river basins of the southern slope of the Ili Alatau, precipitation is 39% below the norm. The filling capacity of small and medium-sized reservoirs at the beginning of the growing season was about 75-80%.

In the Zhambyl region, in the Shu and Talas river basins, the water level is below 20-25%. The entire flow of these rivers is formed on the territory of the Kyrgyz Republic, and in conditions of low water levels, difficulties arise in obtaining agreed volumes for interstate water bodies.

In the Turkistan and Kyzylorda regions, the water level in the Syrdarya river depends on the filling of the Toktogul reservoir.

“An important role in this is played by the agreement adopted with neighboring countries. We agreed with the Kyrgyz side on additional water discharge. In particular, at the peak of the growing season (June-August), an additional 330 million m3 of water will be discharged from the Toktogul reservoir,” Mirzagaliyev said.

According to him, agreements have been reached on the passage of this volume of water through the territory of Uzbekistan.

Also, together with the Tajik and Uzbek parties, agreements are being held on the operating mode of the Bahri Tozhik reservoir. In particular, an agreement was reached for the Kazakh side on additional discharge of water from the Bahri Tozhik reservoir in the amount of 315 million m3. The Tajik side, in turn, asks for material and technical support in the form of 80 tons of diesel fuel, 30 tons of diesel oil and 1 excavator.

Taking this into account, in February-March, the ministry with the Ministry of Agriculture held meetings with a trip to the regions, informed about the current water situation, recommended to reduce the sowing of water-intensive crops and prepared for the growing season in low water conditions.

“In general, it cannot be said that the growing season takes place in difficult conditions. But during the growing season of 2020, the runoff of the Ili river is 70% lower than the norm in comparison with long-term data. And it should be borne in mind that last year there was a critical situation in the Kapshagai reservoir. This situation may repeat itself this year,” Mirzagaliyev said.

At present, irregular irrigation water supply from the Kyrgyz side is observed in the Korday region. In addition, hot weather affects.

In this regard, explanatory work is being carried out with agricultural producers of the Kordai, Baizak, Zhambyl and Talas regions. Water is distributed between farms by the method of water rotation in accordance with the sequence.

In the Kyzylorda region, due to the low water level in the Syrdarya river, a difficult situation continues with regard to water supply to the irrigated lands of the region, especially rice fields.

To mitigate the consequences of low water, the forces of the RSE Kazvodkhoz are taking hydraulic and organizational measures. In particular:

About 85% of the inflow to this region comes from the territory of Uzbekistan. In this regard, it depends on the volume of inflow into the Syrdarya river through the interstate canals Dostyk, Zakh, Khanym.

The volume of the Shardara reservoir is 550 million m3 less than in 2020. In connection with an increase in applications for irrigation on the Dostyk canal, a canal for machine water supply from the Shardara reservoir was launched in the second decade of May. In addition, 14 drainage wells and 3 pumps are involved.