At the meeting chaired by the Acting Prime Minister of the Republic of Kazakhstan Alikhan Smailov, the progress in the implementation of instructions given by the President Kassym-Jomart Tokayev since the beginning of this year was considered.

The meeting was attended by heads of central state and local executive bodies, NCE Atameken, national companies and holdings.

Before the opening of the meeting, a minute of silence was held in memory of the victims of the unrest in the country. 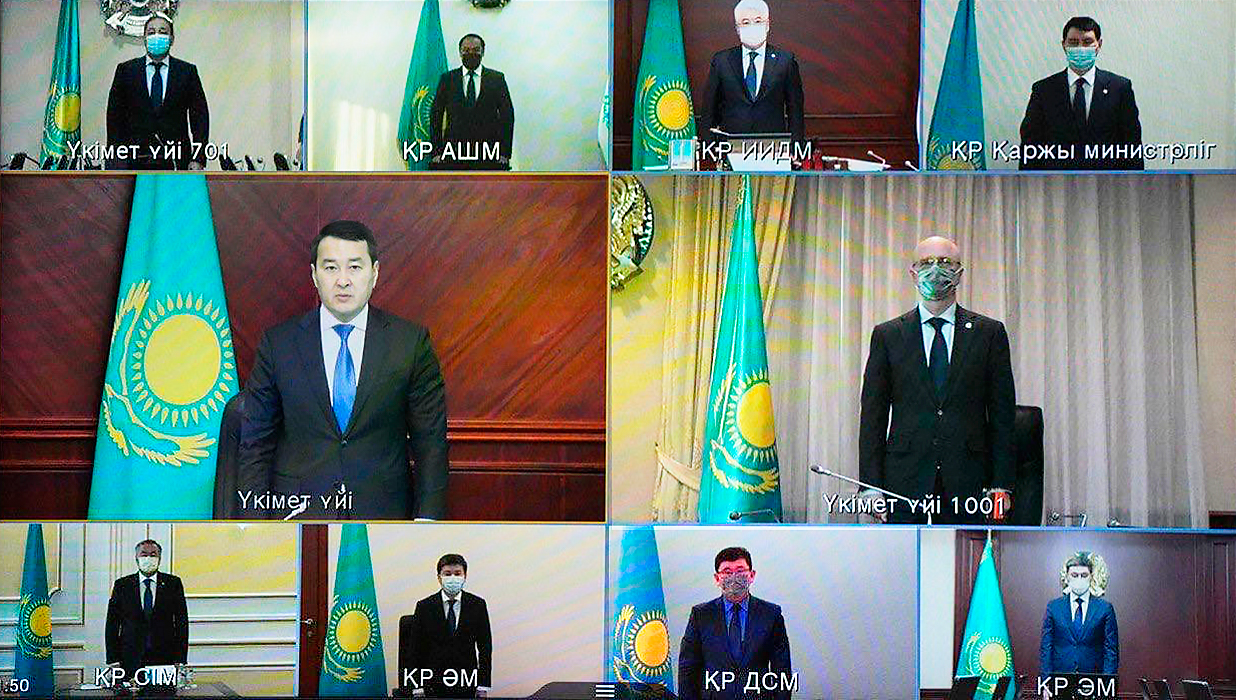 Alikhan Smailov noted that the current year began with very difficult and dramatic events. Kazakhstan faced an unprecedented aggression of destructive forces. The largest metropolis of Almaty and many regional centers were under attack by terrorists and bandits.

“Thanks to the timely and decisive actions of President Kassym-Jomart Tokayev, we managed to stop the spread of chaos, lawlessness and restore order. Unfortunately, people suffered, were wounded and injured. We wish them a speedy recovery. The saddest thing is that it was not possible to avoid casualties among our citizens. Restoring order and legality cost the lives of police and military personnel. We are proud of their feat for the sake of preserving the constitutional order of the Republic of Kazakhstan,” Smailov said, expressing condolences to the families of the victims.

To implement the instructions of the Head of State, an interdepartmental investigative operational group was created with the inclusion of special prosecutors, employees of the National Security Committee, the Ministry of Internal Affairs, anti-corruption and financial monitoring agencies.

The General Prosecutor's Office has launched pre-trial investigations into the facts of committing acts of terrorism, organizing and participating in mass riots.

The personnel of the power structures were transferred to a special regime of service and increased combat readiness. The necessary funds have been allocated from the emergency reserve of the Government to equip the special forces of the internal affairs bodies and the National Guard.

Measures are being taken to provide material assistance to the families of law enforcement officers killed during the riots.

A direct line was organized on the basis of the Unified Contact Center 1414 to provide citizens with information about victims and missing persons. Regional commissions have been established to assess the damage suffered as a result of the riots. NCE Atameken is collecting relevant information from entrepreneurs.

Access to online services of the largest second-tier banks has been restored if there is a mobile connection. The network of POS-terminals and ATMs was ensured. The functioning of the trading systems of the Kazakhstan Stock Exchange, the Kazakhstan Center for Interbank Settlements of the National Bank and other infrastructure of the country's financial system was ensured.

The security of the objects of diplomatic missions in the country has been strengthened. Constant communication with foreign states and international organizations is provided.

The Acting Prime Minister Smailov instructed to ensure high-quality and efficient implementation of the tasks set by the Head of State.

Smailov also gave instructions on ensuring the stability of prices for socially significant food products, working out the issues of creating a public fund for the People of Kazakhstan, developing a procedure and mechanism for subsidizing part of the rent for secondary housing for socially vulnerable segments of the population.

“It is necessary to carefully study all constructive appeals of citizens and work out the necessary decisions on them. All central and local executive bodies, NCE Atameken, within two weeks, should send proposals to address the issues raised by the population to the Ministry of National Economy,” Smailov said.