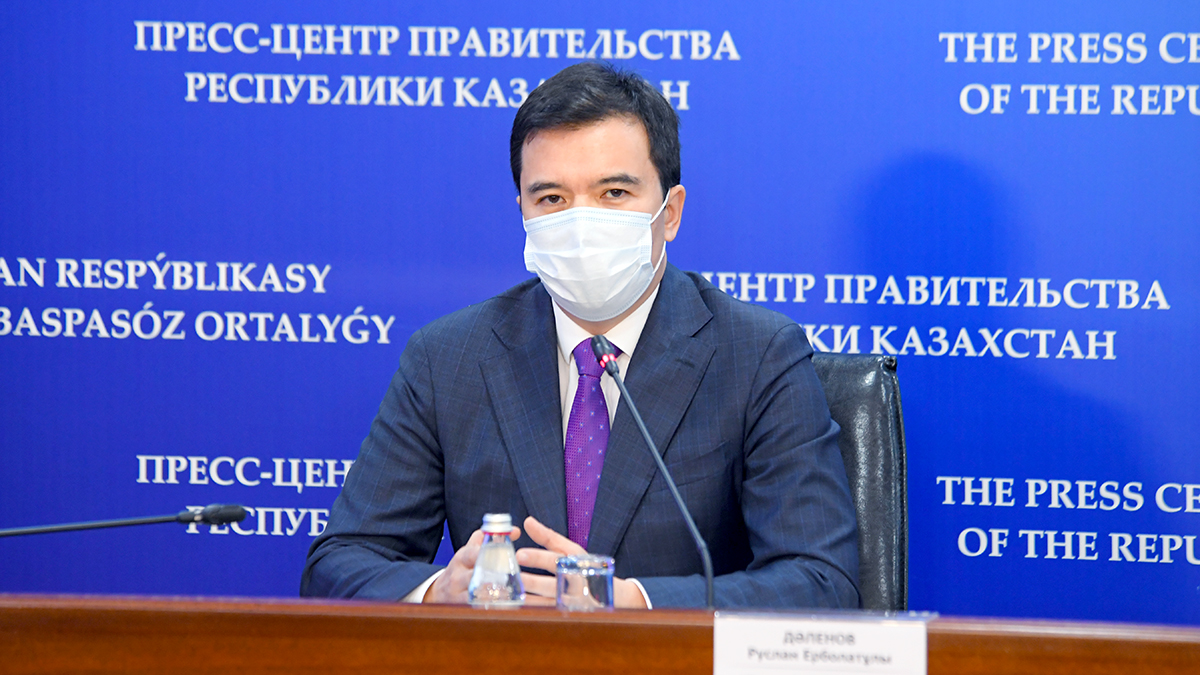 During a briefing at the press center of the government, Minister of National Economy Ruslan Dalenov answered journalists' questions about the measures taken to implement the Address of the Head of State Kassym-Jomart Tokayev "Kazakhstan in a New Reality: Time for Action" dated Sep. 1, 2020.

In his Address, speaking about the business climate in the country, the President noted that this "... area needs reforms, since the regulatory system remains cumbersome, even punitive.’’

"What will we do? New regulatory approaches will be developed from scratch. The principles of regulation have been changed — these are reporting, requirements, licenses and inspection systems,” the minister said.

According to him, today the business provides 639 types of reports. Separately — financial, tax, statistical reporting. It is planned that through automation and integration, reporting will be reduced as much as possible.

The number of business requirements is about 13 thousand — these are sanitary, construction, labor, environmental and other standards. All of them will be cleared of contradictions and outdated provisions that hinder business.

On licenses and permits

“There are about 300 of them, an audit will be carried out. State bodies will have to prove the need for the further existence of certain licenses and permits,” Dalenov emphasized.

On system of inspections

“At present, a moratorium on inspections of small and micro-businesses announced by the Head of State is already in force in the country. In the future, it is planned to transfer all checks to the maximum of preventive control. Many of them can be transferred to information and diagnostics. In general, this is a lot of work,” the minister said.

According to Dalenov, the moratorium on inspections of small businesses announced by the Head of State makes it possible to introduce regulation from scratch.

Answering the question about the process of reducing the number of employees of state structures and the quasi-public sector, the minister explained that the efficiency of the remaining civil servants will depend not only on the reduction and increase in salaries of employees after the introduction of a factor-point scale. The optimization of the staffing level will be accompanied by simplifications and automation of business processes. In addition, it will be proposed to reduce a number of management links.

“A special stimulating factor will be the increase in salaries, especially for employees of lower positions. Last year, their salaries have already been increased by 25%. Thanks to the optimization of the staffing, it will be possible to increase wages by another 15% on average,” Dalenov informed.

The Head of State in his Address noted the complexity of taxation. He instructed to radically simplify the fulfillment of tax obligations and minimize the number of taxes and payments.

As the minister noted, now the issues of reducing the number of taxes are being actively studied.

Proposals have already been prepared to combine two taxes into one payment and abolish one tax. It is proposed to combine the property tax of individuals and the land tax from individuals into one payment — this will reduce the costs of filling out receipts, bank fees, etc. It is also proposed to abolish the land tax under multi-apartment residential buildings, which will reduce errors in tax payments. free from complex calculations.

“This will affect about 3 million taxpayers. New proposals will be considered separately, for example, taxes and deductions from the wage bill. They can probably be combined into one payment, which will greatly simplify payment for small and medium-sized businesses. This also applies to various fees and charges for the provision of permits, which can also be optimized into aggregated payments,” Dalenov explained.

As for the timing of implementation, proposals have already been prepared, the introduction date is expected from 2021, the minister said. For the rest of the payments, the introduction of which is still being discussed, the dates are scheduled from 2022.

In the President's Address, much attention is paid to the issue of regional development. Dalenov also answered questions about what tasks and approaches will be developed for regional development and increasing the competitive advantages of each specific region, how the independence of akims of villages and auls will increase, and how the effect of state programs will affect the countryside.

According to the minister, new approaches to regional development and development of territories will be worked out. Growth points, competitive advantages, production opportunities and job creation will be identified for each region.

“All this will be reflected in the document being worked out, which is called the Forecast schemes of the country's territorial spatial development. Secondly, the modernization of villages will continue under the Aul - El Besigi project. This year, 216 villages will be modernized — this is the construction and repair of rural schools, sports complexes, dispensaries, roads, lighting, engineering networks. This work will continue in 2021,” Dalenov explained.

The finances of rural districts will also be strengthened, part of the income — 4 types — will be transferred to the budgets of the districts, respectively, the villagers through the meeting of the local community will be able to resolve more issues. Financial opportunities will increase for 2,353 villages and rural districts.

It is planned to develop a new concept for the development of local self-government, it will reflect such issues as the election of rural akims, the expansion of the powers of maslikhats. In general, the active participation of villagers in the formation of the district budget is envisaged.

"All this work will expand the economic opportunities of the regions, modernize villages, and increase the active participation of the population in decision-making on local topical issues," the minister said.