Tugzhanov: All social obligations to be fulfilled in due time 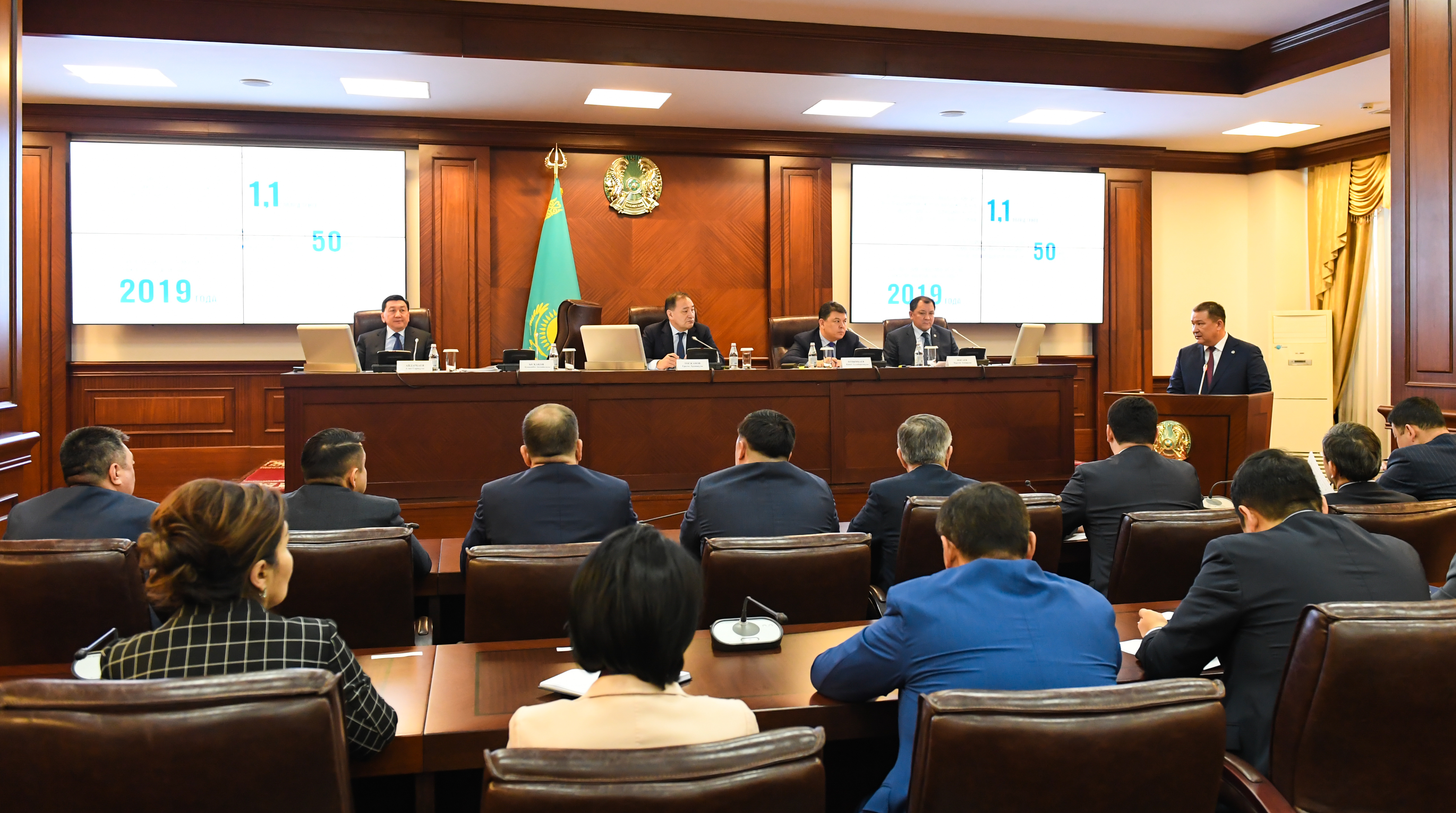 In the light of the implementation of the President Kassym-Jomart Tokayev’s instructions regarding the fulfillment of social obligations to the people, Government Delegation led by Deputy Prime Minister Yeraly Tugzhanov made a working visit to the western regions of the country.

The delegation included Minister of Energy Nurlan Nogayev, Assistant to the President Kanat Bozumbayev, Chair of the Board of Kazmunaygas JS NC Alik Aidarbayev, as well as vice ministers of Healthcare Kamalzhan Nadyrov, Industry and Infrastructure Development Amaniyaz Yerzhanov, National Economy Ermek Alpisov and Deputy Chair of the Committee of Labor, Social Protection of Population and Migration of the MLSPP Tolegen Ospankulov.

On March 13, the delegation visited the Mangystau and Atyrau regions

During the working trip, Eraly Tugzhanov held a series of meetings in five regions on problematic issues of oil and oilfield services companies with the participation of regional akims and representatives of the oil and gas sector. The meetings discussed the impact of the global financial and economic crisis on the economy of Kazakhstan, as well as relevant aspects of the social and labor agenda.

“The biggest problem that complicates the economic situation in the world is the decline in oil prices. In addition, the outbreak of the coronavirus epidemic had a negative impact on the economy. The disagreement of OPEC + members led to a drop in oil prices by 30%. In the future, there is a scenario of economic development and accounting for budget parameters at the level of $20-40 per barrel,” said Yeraly Tuganzhanov.

At the same time, the deputy prime minister assured participants of the meeting that the issues of social stability and health of the nation are under the constant supervision of the president and the Government is already taking the necessary measures.

“First, all social obligations will be fulfilled in due time. Second, a special roadmap is being developed for the implementation of infrastructure projects for the repair and improvement of settlements to ensure stability in the labor market and prevent a sharp increase in unemployment. At the same time, special attention will be paid to the employment of workers and the unemployed, who will be fired,” the deputy prime minister of Kazakhstan said.

Noting the importance of maintaining the well-being of citizens, Yeraly Tugzhanov called on local authorities and employers to strengthen measures to ensure social guarantees in each region.

“As you know, the oil and gas industry is the main engine of the country's economy. The most important thing for the well-being of the population is employment. Therefore, it is especially important today to preserve jobs and ensure timely payment to employees,” said Yeraly Tugzhanov.

During the meetings, regional akims presented detailed information on the social and labor situation in their regions to members of the Government.

So, according to the akim of the Mangystau region Serikbay Trumov, wage arrears are available at 9 bankrupt enterprises in the amount of 75.9 million tenge to 127 employees, the repayment of which takes place as part of bankruptcy procedures. In total, about two thousand new jobs were created in the region, and the level of wages of 293,726 tenge exceeds the national average. Targeted social assistance in Mangystau region will receive 2.5 thousand families.

According to the Akim of Atyrau region Makhambet Dosmukhambetov, the unemployment rate in the region is 4.8%. Targeted social assistance will be provided to 1,200 families. Meanwhile, all measures are being taken in the region to maintain social stability.

Today, 52% of all republican oil is produced in the Atyrau region. The largest mining companies are Tengizchevroil LLP, NCOC, Kazmunaygaz JSC. At present, about 15 thousand workers work in the oil production sector, and almost 80 thousand people work in oilfield services companies.

According to Assistant to the President Kanat Bozumbayev, the state is developing a plan to prevent crisis situations associated with a fall in oil prices and a pandemic.

TCO General Director Imer Bonner, who participated in the meeting, noted that Tengizchevroil’s oil production and refining is carried out as normal.

“TCO is able to survive the difficult economic situation in connection with the fall in oil prices, since there already was a similar period in the history of our company. At the same time, there are no foreseen job cuts, we are reviewing our business decisions and we will fulfill all obligations without any incidents,” said the director general.

On March 14, the delegation arrived in the Aktobe region

During a meeting with the regional activists and the leaders of the largest oilfield service companies in the region, a detailed discussion was also held on the current situation in the social and labor sphere of the Aktobe region. The oil and gas industry occupies a largest share and accounts for over 35% in the structure of industry in the region.

According to Akim of Aktobe region Ondasyn Urazalin, more than 15 thousand workers work at the enterprises of the region’s oil and gas industry, and as part of job preservation, collective agreements and memoranda have been signed with all companies. According to the order of the Head of State from the beginning of this year in the oil and gas sector, wage increases averaged 15% or about 11 thousand employees, and in other enterprises the issue of wage increases is under consideration by the founders.

Akim of the West Kazakhstan region Gali Iskaliyev acquainted the members of the government delegation with the socio-economic situation in the region and pressing issues of the work of oil and gas enterprises.

The situation at the enterprises of the region remains stable. Enterprises operate normally. At large oil and gas projects in the region, staff reductions due to the situation with COVID-19 and changes in the exchange rate are not planned.

The average monthly wage of the West Kazakhstan region of 183,459 tenge is at the level of the republican indicator.

March 15, members of the Government, headed by the deputy prime minister, visited the Kyzylorda region

At the meeting of Deputy Prime Minister Yeraly Tugzhanov with the akim of the Kyzylorda region Kuanyshbek Iskakov and representatives of the oil and gas sector, the issues of developing new oil fields, introducing new technologies into this area, as well as indexing tariffs in the oil service were especially relevant.

According to Kuanyshbek Iskakov, the average salary in the Kyzylorda region is 150,235 tenge, which is lower than the national average.

In general, in order to ensure employment this year, as part of the implementation of state programs, it is planned to create over 13 thousand new jobs.

Tugzhanov noted that issues related to the development of regions are under special control of the country's leadership.

“It is necessary to take comprehensive measures to implement anti-crisis measures in the region, especially in terms of ensuring the stable operation of production facilities and preserving jobs. An increase in the release of workers due to a reduction in production volumes cannot be allowed. This is a serious problem,” the deputy prime minister emphasized.

Following the results of meetings in the regions, the deputy prime minister instructed the Ministry of Energy and regional akimats to strengthen cooperation with representatives of the oil and gas industry in resolving a number of problematic issues.

First of all, it was instructed to carry out a review of production plans and develop anti-crisis roadmaps related to changes in oil prices.

As part of the observance of labor obligations, Tugzhanov instructed to take concrete measures to prevent labor disputes, preserve jobs and timely pay wages to employees of enterprises.

The need to strengthen measures aimed at preventing the penetration and spread of coronavirus infection in the field was also noted.

During a trip to five regions, Yeraly Tugzhanov instructed the oblast akims to take special control of the implementation of restrictive measures to impose a temporary ban on mass cultural and sports events in the country, to strengthen the sanitary regime in crowded places and other preventive measures. In addition, it was instructed to ensure the uninterrupted supply of citizens with food and essential goods.